How Blessed We Are

I am feeling an enormous amount of gratitude right now for this incredible life I'm able to lead. I feel guilty about my blessings much of the time --because it does seem that I have been blessed beyond anything that I deserve.

We've had a wonderful day.

First things first: I never was able to get that tiny strand of Christmas lights blinking. The whole tree blunk (okay, okay, will blink) except for that one strand. It's the Navajo Quilt Strand.

The girls woke up early (but not at dark thirty--it was just before 7:00 when they started tearing around.) They came downstairs and SANTA HAD BEEN TO OUR HOUSE! 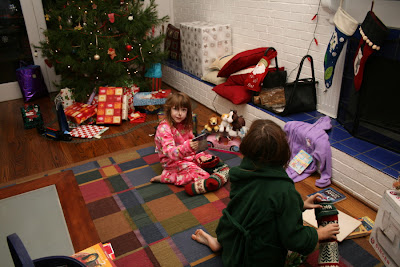 There was a lot of shrieking.

We all opened our stockings--Santa had brought me some organic body and hand lotion which has no alcohol in it (check the label on your lotion). I said, "Oh, wow, look at this lotion!" and Jane looked at me and said, with just a shade of doubt, "You like that?"

My mom and I lost it. It became THE saying of the day.

Then Scout got the paper. Well, part of it. Hm. 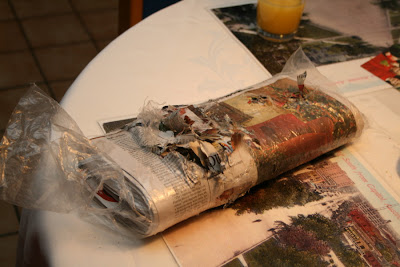 So then we had breakfast 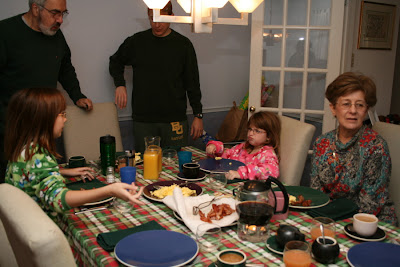 and went back to open the wrapped Christmas presents under the tree. 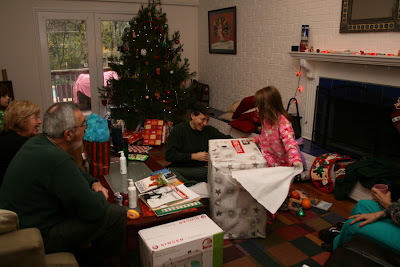 The pets were VERY happy. And every time I looked around, there was my ancient dog Sydney, trying to figure out where she could go with her Christmas bone and be safe. 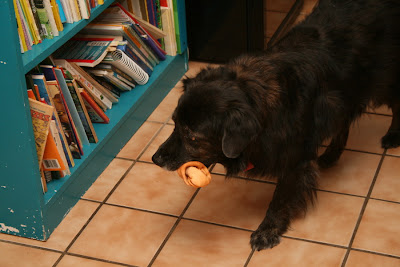 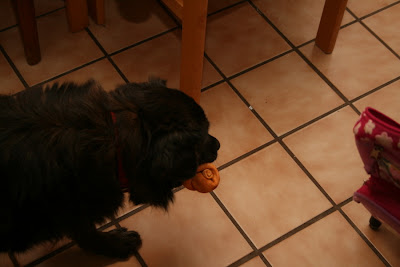 My dad liked his socks. (Isn't he a good sport for standing in first position for the blog?) 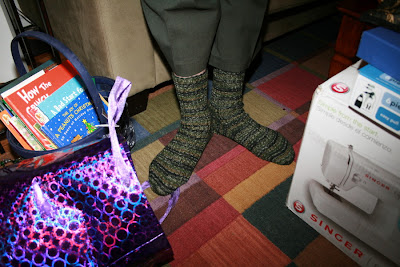 (Had to take a break right here to go watch "Harry Potter and the Order of the Phoenix" with my family.)

Coop got the biggest present under the tree--a new grill! He SAYS he had no idea what it was and it was both a surprise and exactly the right thing. Given my history of gift-giving to my husband, all I can say is "SCORE!"

But as it turns out, Coop outdid me again. Because I got the SMALLEST present under the tree. 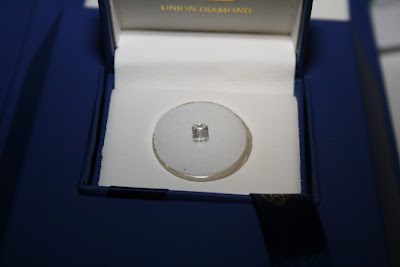 See, when Coop and I got married, exactly one hundred years ago on January 3rd, we both chose very simple gold bands. 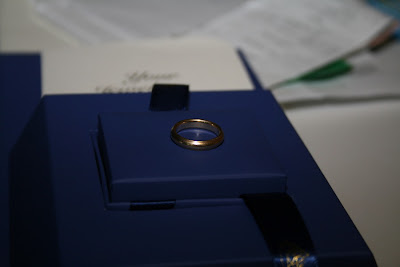 He was starting a new company and I was going to leave my job to stay home with our kids. Having a precious gem on my finger didn't seem very important to me. Look at these hands--they are not the hands of a woman who can wear too much jewelry, you know? There's that index finger that I broke in two places when I slammed it in the car door. This is the hand that was on the cover of my book, "The Mermaid's Purse." This is the hand that has been painting and cleaning and stringing blinking Christmas lights (well, most of them are blinking.) (Not that I'm bitter.) (Or obsessing.) --this hand is not the hand of a woman who cares very much what her hands look like. 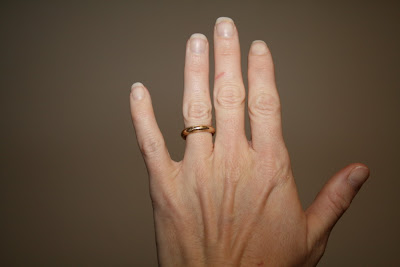 Then in 2001, Coop told me that he had put some money into an investment fund with the idea that he would grow it until he had enough money to buy me a nice stone for my ring. Unfortunately, the stock-market cratered and that money was gone. But I was so touched that he had even spared any thought at all to buying me a gem, that it was almost as if he had given it to me. I was touched and I cried and I just loved him so much.

Honestly, I didn't even think I wanted a diamond. But when I opened this box, the whole of the history of our marriage came washing over me --all the effort he has put over the years into buying me a stone for my ring and the fact that he found me EXACTLY the type of stone I like the best (emerald cut) and how after eleven years, he never let go of his goal --and I started to sob. And I looked around and my mother and my mother-in-law were both crying, too! And Coop, my loving, unbelievably amazing husband --well, he had tears in his eyes, too.

Suburban Correspondent said…
Hey, we have the same wedding anniversary (but in 1992)! We did the same thing, just bought ourselves bands at the time. I think I'll ask for something prettier on our 25th.
December 26, 2007 at 12:30 PM

Suna Kendall said…
VERY nice diamond--and one of my two favorite shapes. One of my best childhood memories is my parents' tenth Christmas as a couple, when my dad got Mom a ring. She started crying, and so did my brother and me--we thought something was terribly wrong--then we learned about crying from happiness. I have that ring today. It's a little fragile, so I only wear it occasionally (and um, it really was a cocktail ring--Dad was not a jewelry expert). But it is a great memory of my parents' love.
December 26, 2007 at 1:04 PM

Got a litte misty over Syd with her bone, too. Give her a big smooch on the nose from me.

Suzy said…
Okay, what kind of parents make their children EAT BREAKFAST before they tear open the gifts? lol. NOT.

Anonymous said…
Your mom and you look a lot alike! Cool about the diamond! Is it weird that I cried when I got my Kitchenaid mixer?
December 27, 2007 at 5:57 PM

Barb Matijevich said…
No, MY mom is the blond and you can just barely see her in one of the pictures. The other woman is COOP's mom and they favor each other and both of my girls favor him.