A bottle of wine has 500 calories in it.

How much laundry do you have to do to work that off?

How much laundry will work off seventeen bottles?

My MIL went home today. My FIL comes tomorrow. I've done roughly six MILLION loads of laundry today, that's why I'm asking. Well, that, PLUS, I started Weight Watchers today. Because while I've been lamenting with great drama the fact that I keep gaining and losing the same two pounds, my friend Kathy just very unceremoniously started plugging away at Weight Watchers and managed to lose 16 pounds before Christmas.

I hate dieting but I just can't pretend that I haven't gained all this weight anymore. My husband was dumping video to DVD today and dudes, there I was, in all my ever thickening glory. Clearly, something must be done. So I'm coming out to you people. I joined Weight Watchers. I want to kick innocent but svelte people! Please save me from social ostracism by encouraging me to stick to the plan and lose this weight as soon as possible!

I know you're wondering why I'm starting WW now and not, say, after the holidays and my anniversary and my birthday and Ana's birthday and Mother's Day and the 4th of July but well, the truth is that I can't take another day of not feeling at home in my skin. And those pictures sort of showed the truth--I had already gained some weight even before my foot surgery. So, okay, then, if I'm unhappy about being large, then it's up to me to take action. Because as it turns out, this sitting around waiting for some miraculous skinny pill? It's not so effective.

So, y'all hold me accountable, okay? (Especially those of you who live outside of kicking range.) Look, here's my pathetic little after dinner treat which I am not throwing away until I have gnawed every last bit of apple-y flesh off it. 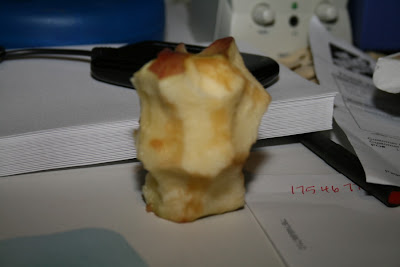 In other news, guess what? I met hokgardner and her MOTHER at Whole Foods today for coffee. (Just a little bit of fat-free milk in mine, thanks. Oh, I'm so sorry, did I kick you?) I don't want to brag but her mother reads my work, too. (I keep wanting to ask people, "are you SURE you want to read this? Because if you don't, I'll get over. No, really. Maybe I'll get over it. Okay, okay, there's a CHANCE I'll get over it. A very slim chance but still.) anyway, we had a delightful time but I will confess to you all that I was the only one who brought her knitting. 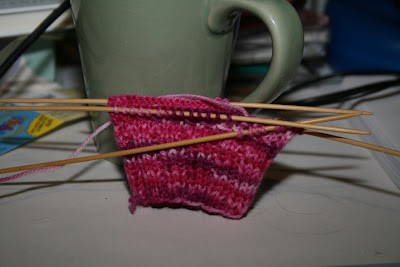 I am such a geek.

In still other news, my Christmas cards finally came today. 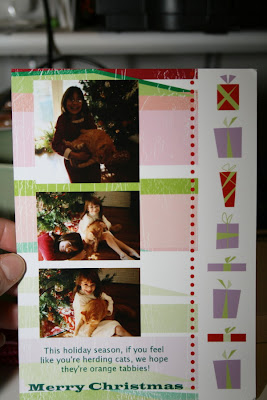 I hate them. So, it's a really good thing that I probably won't get them in the mail before February anyway, don't you think? Actually, I was thinking about writing a Christmas letter to let people know of all the changes in our world this year.

Years ago, I was going to write a spoof on a Christmas letter and I bought THIS book. 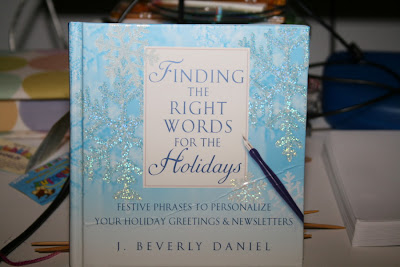 Never used it. Never read it. Scoffed at people who MIGHT read it.

Why is it that I ALWAYS get my comeuppance? Why?

Ei said…
I think I'm going to join ya'll too. Maybe we can have a "So the thing is...Weight Watchers" group. Or...we'll be the keepers of the points.

I cracked up about you being the only one who brought your knitting. Everytime I see someone knitting in public now, I think of you.
December 27, 2007 at 9:39 PM

Suzy said…
Okay, this is what works for me if I want to take off weight. I have one slimfast chocolate at 6:30 pm. Then if I get hungry later I eat one of those little bags of prepackaged pitted prunes. There's 3 in there and the fiber fills you up.

hokgardner said…
As I watched you knit, I was wishing I had brought mine along, too. I think it's so companionable to sit and knit with a friend. Mom and I had fun visiting with you yesterday. She's already planning to share some of your writing tips with her students.
December 28, 2007 at 10:11 AM

ckh said…
Weight Watchers will help you feel like you have the tools you need to make the changes you want. At least that's what it did for me until I went into Self Sabotage Mode and ate a half of an apple pie for Christmas.
December 28, 2007 at 12:52 PM

deb said…
okay...since I read your blog everyday (almost) I am counting on you to lose that weight! I am also trying (but not on ww). How much are you trying to lose....maybe you could start a LWA (lose weight along!) PS for breakfast I had oatmeal with fake sugar and fake butter. No lunch.
December 28, 2007 at 4:06 PM

Amanda said…
I never did get around to mailing any Christmas Cards. Jeff drew our card this year, and we got i tup on our site:

and then promptly forgot to email people as to its existence.

I'm trying to get back into swimming and walking. I do not enjoy the tightness of the waistband of my non-elasticized pants.
December 28, 2007 at 4:45 PM

Anonymous said…
I am the hokgardner's mom who met with Barb at Whole Foods. We didn't bring knitting because a. I'm in a brace for arthritis in my thumb and am not too good at knitting in it yet and b. we were disorganized. And I miss knitting so much!!! For those of you have not met Barb, she is GORGEOUS, even at 10:00 am, with in-laws coming and going, getting ready to sell her house and move to LI, and with her two girls not in school. And she is so, so nice and she is smart and funny and generous with her time, and so, so NICE!
Thank you Barb-it was a treat to meet you, and I know you'll have a great time in LI, discovering that part of the country and exploring NYC!
December 29, 2007 at 12:23 PM

Lynn said…
LOL I have to laugh at that picture because I have similar to it except its my maternal grandmother and her sister. They at least took off the aprons, but they are abt the same size. I've also realized that if you put me in the same dress and add a babushka, it would be me as well. So while I"m not going on WW, I DO have a plan of losing 5lbs a month. Not so difficult that I have to cut out my (real) mayo on a sandwich and the occasional cookie. That way by summer I won't look like a woman from the old country.
December 29, 2007 at 12:54 PM

LaDonna said…
So, I'm finally catching up on my blog reading now that I'm back from the holidays and a bit of vacation. I agre with Ei, we may need to start a WW blog group. I've been doing it for a year now and LOVE LOVE LOVE it! Before the holidays, I had lost 35 pounds, but I decided that I wasn't going to spend the holidays feeling guilty about it, so I took a short break. Still watched what I ate, but didn't count points and yes, I ate pretty much whatever I wanted on Christmas Day in particular. Stepped back on the scale today to start back up...I lost two more pounds between Thanksgiving and now! How'd that happen? So good luck! Have you don't WW before? Do you know about Dottie's????
January 2, 2008 at 2:04 PM