The inspection of our potential new house on Long Island revealed that the house has no central air-conditioning.

Does it seem odd that we didn't notice that little fact? We, um, didn't notice when we were looking at the house, probably because it was --hello--SNOWING outside and probably because we're from Central Texas where you need air-conditioning nine months out of the year continuously and the other three months sporadically. Right now? On December 5th? It's 79 degrees here and you just would be astounded at how beautiful it is.

The problem is that I'm not sure I can live without air-conditioning because I seem to be stuck in one long (42 years now and counting) hot flash. Heat Intolerance R Us.

On one hand, it would be different if we weren't already spending so incredibly much money. I mean, you expect to do SOME upgrading when you move into a house that is 50 years old. It's just that when you're spending the amount equivalent to the entire budget of a third world country, you just expect not to have to do a whole lot.

On the other hand, as I am overrun with workers this week painting and power-washing and caulking and taping and floating, it's not as expensive as I would have thought. Like, we have these horrible shutters on our house. They have HEARTS cut into them, which is so cute, it might make you throw up. Coop and I have wanted to replace them for the entire 7.5 years we've lived here. We hates them, my precious. So, our Realtor here noticed they were rotting and told us to replace them. I ordered the new ones today; it was less than $350. We've lived with those shutters which look like they belong on the cottage of the Seven Dwarfs for more than seven years and all this time we could have replaced them for less than $350.

(The funny thing is that we aren't the only ones who hated those hearts and then didn't replace the shutters. Someone apparently tried to make the cut out hearts less noticeable. Here are the shutters, which were taken off my house today. 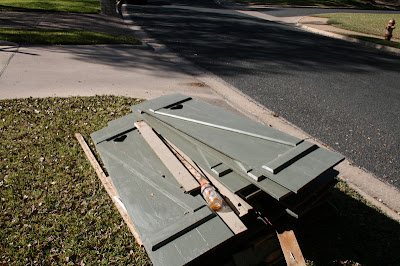 And then here is the house minus the shutters... 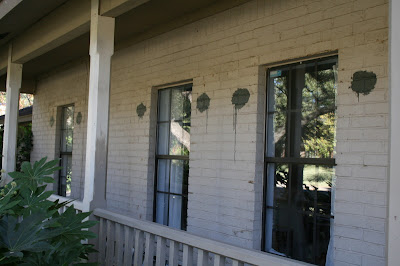 Hm, now where could those hearts have been?)

On the other hand (well, maybe SOMEONE has three hands) --that's what things cost HERE, right? In the same place where our house today costs less than half of what it would cost on Long Island.

It's looking pretty good to me right now, too.
Email Post
Labels: A picture is Worth at Least Ten Words humor The Great Cooper Move whine

DK said…
Both houses I've owned did not have central air. Now, one (in Chicago,which according to my friend Annie who lives in East Rockaway, Long Island has a climate not unlike Chicago) benefitted greatly from several well-placed window units, and, well, the other one (NH) sticks out of the side of a large granite mountain, so even when it's too hot upstairs, the basement/entry level is always cool. But, what's your heating situation? If you have forced air heat it's an easy conversion to add AC (although, it looks like you have baseboard electric heat). If not, it's more involved, you've got to get the ductwork installed and whatnot, but it's doable. Or, I'd ask the owners how they fare in the summer, and what they do. I'd also make sure I get a copy of the heating costs - electric heat can be expensive for a house that big (or even my 2000 sq foot one in NH). But, if you do have electric heat, you can turn the thermostat down and spend the extra money on wool yarn. And then before you move you can come to NC for the weekend and we'll have an intensive sweater class. And wine. And chocolate. And a trip to the LYS. Hmm, maybe I'm rooting for electric heat...
December 5, 2007 at 3:59 PM

Anonymous said…
Sweetie, I feel your pain. I would never, ever, ever, not even if the house was free with the condition that I didn't install central air conditioning, did I say never(?)...live ANYwhere without central air. Right now, in Toronto, it's about minus a million degrees and if I was house shopping today, the first thing I would look for would be central air.
December 5, 2007 at 4:45 PM

TheOneTrueSue said…
OK, I just typed a big old comment and it was lost to the wireless connection, arg! It was so brilliant and insightful too.

No air conditioning? Egads! You know, everytime we move I think, why did we wait so long to paint, or to replace the carpet or whatever. It makes no sense. But we do it every time.
December 5, 2007 at 5:47 PM

Anonymous said…
Darlin' this isn't the south. If the words "air conditioning" aren't mentioned loudly and repeatedly, there isn't any. As for what they did in the summer - they have a POOL. You're going to remodel anyway. See if you can add it on. If not, stick a window unit in your bedroom windows and spend summer days by the pool.
December 5, 2007 at 6:47 PM

Suburban Correspondent said…
The weather is enormously different where you are going. As in, not even comparable humidity levels. You may not miss the air conditioning on all but the worst days (if you have severe seasonal allergies, though, it's a problem). And window units can do the trick. There was no air conditioning in the houses we lived in in Rhode Island; but even when the weather was the most hot and humid (there), it was nothing compared to what we are used to further south. You will not believe what people call humid up there. You'll laugh.

Now I'm beginning to miss the north. What sort of heating system does the house have? Radiator or forced air? That's what you should be worrying about. Radiators rock!
December 5, 2007 at 8:21 PM

ckh said…
Maybe they don't have air conditioning because they didn't need it. Perhaps they get good cross-ventilation breezes or windows that face north or south. Also, you can buy a portable room ac from Costco for the days that it is unbearable. Ask for it at closing.
December 5, 2007 at 8:53 PM

Mrs.Q said…
It's very kind of you to offer both tequila and sympathy to troubled souls...however, given that a new starter is probably a lot less expensive or stressful that combining house-hunting with house-selling...why don't you just go ahead and have that tequila yourself?! But thanks so much for the thought; I do indeed appreciate it!

Ei said…
The shutters...that is priceless.

I may not be popular with the gang for saying this, but hey, you know what you want and need so ask for it. If you can't get it, then look further. Or tell Eiball to shut up and she will.

You could always hole up in that basement getaway during the hot days, I suppose.
December 6, 2007 at 12:14 PM

MadMad said…
OK, I live NORTH of LONGGUYLAND and I definitely use my central air almost all summer long. It's humid, and thanks to global warming, quite hot. Maybe not seven months of the year, but enough. It's a few thousand dollars, probably, to install on a house that size. But it definitely isn't a "standard" on homes here, so I don't think you'll be able to negotiate for it, the way you might with a bad roof.
December 7, 2007 at 1:45 PM