I fight this battle sometimes.

I worry that maybe I'm too happy.

Seriously, I worry that I'm too happy and y'all are going to get sick of my Pollyanna-ish take on life and leave me and I'll just be one more blogger noting what she had for dinner and the misbehavior of her dog. I mean, every writing class I ever took extolled the virtues of the plot conflict necessary for writing that engages the reader.

I'm worried that I have no conflict.

Worse, I'm worried that I have no plot.

So, I have one more just glowing, fairy-tale day to report and then I'll try to be more sarcastic and depressing, okay?

Yesterday, my girl friend Lin and I planned a day together. We both had some errands to run and I think she has made it her mission to get me out of the house once a week so that I don't answer the door with a box cutter in my hand and a wild look in my eyes. (As if I could find the box cutter. We have three of them. I can't find a single one. I've resorted to using my teeth and fingernails to open boxes, which is really not doing wonders for either or them. Doing wonders for that wild look in my eyes, though.)

So, she picked me up in this... CAR. I tried to take a picture of it with my cell phone but I (naturally) did something wrong and it didn't come out. Actually, it didn't really even happen or I can't find it now on the phone and even if I could, I wouldn't really know how to get it to the blog. But here's a picture I stole off of the Internet. 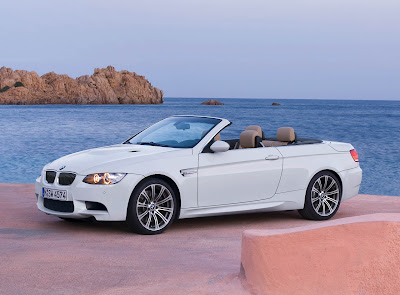 Y'all know that I'm not much of a car person. I drive a 2003 Honda mini-van with Jane's name scratched into the paint on the back and a front bumper that has seen some hard parking. I never notice it.

This car could be the car that converts me, though. Wow.

And of course, it was SPECTACULAR weather.

I had showered, shaved my legs, and had make-up on. If I closed my eyes, I could imagine myself in my twenties, strong and slim and heading out with my friends to the beach.

That's a seriously good car that can take this 43 year old matron and transport her back TWENTY YEARS!

Anyway, we stopped off at Lin's favorite jeweler because she needed to get her watch fixed and I really needed to get my Christmas diamond set, being as how I'd been hiding it in a box of tea for four months. (Earl Grey, my favorite.)

So, we went in and of course, everyone there knew Lin and we looked all through the cases and I didn't really see what I was looking for. For one thing, yellow gold isn't really "in" anymore and I wanted yellow because white gold and platinum don't look good on my skin. Plus, I was hoping not to get a prong setting because I was afraid I would snag it on everything, loosening the prongs which would result in me losing the diamond which would probably lead to me having to get a job as a waitress in order to replace it.

I would be such a terrible waitress. I can never remember the bread!

So, I didn't see anything. The woman helping us took Lin back to clean her ring and I continued to look through the cases. I saw one that I sort of liked and I asked the woman about it. As we were looking, I spotted one I really liked. It was sort of tucked away.

Anyway, there are many magical things that happened that all came together. For example, the jeweler came in as we were talking and Lin said, "Can we just ask him if this setting will work with the diamond?" And not only did he say yes, but he had time to size the ring and set the diamond RIGHT THEN. There was this one woman who was really sort of crabby who kept interjecting herself into our conversation trying to put the kabash on things. We found out later that this was because this ring had never been re-priced and the price of gold has gone through the roof, right? So, basically, I got the ring of my dreams for half price, with a little added discount they give Lin which mysteriously transferred to me and I got the whole thing set and done and on my ridiculously inelegant hand in about an hour and a half.

I got all teary.

So did the jeweler when he saw my joy, which was pretty special since he didn't look like a guy who was easily moved to tears.

And, um, here's what my hand looks like now. 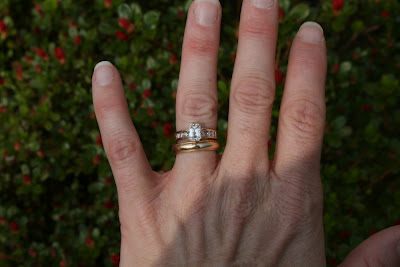 I have other things to talk about, like how I bought this new bra (finally) with memory foam (so not kidding) in it and naturally, the first thing I snagged my ring on was this bra, and how I left my husband a "Happy Anniversary" card because I'd finally gotten my anniversary present and how he thought for a brief time that the card was for some anniversary he'd MISSED --things that I know you're just DYING to hear about but we are off to take our girls to the American Girl shop in New York for a day of complete indulgence for which they will no doubt be deliriously happy and grateful.

Right. The lengths to which I will go to create some conflict and drama for this blog...
Email Post
Labels: good friends gratitude joy love My Personal Fairy Tale Why I Totally Could Rule The World

Lynn said…
You get diamonds for Christmas? Hey, that's my birthstone! Please run Coop through the replicator and set Coop.1's odometer forward about 15 years, OK? I just finished watching the American remake of "Dance With Me" and am in serious need of romance. [Or jewelry. I'm not picky!]
April 26, 2008 at 1:07 PM

LaDonna said…
About time you got that shiny thing set, sweetie! It looks amazing!

And as for the conflict, well, sometimes the craziness of daily life is conflict enough. It's just that you handle it with such grace an pinache. (Beg your pardon if I spelled that wrong, to lazy to look it up, but you know what I mean) It's your humor and dignity in the face of daily disaster that brings me back day after day.

TheOneTrueSue said…
Heh. Well, since I just finished writing about my misbehaving dog, I have no comment. ;>

Rene Perez said…
I love reading about the every day life of people. Those are my most favoritist blogs!!!! Your day sounds great and I love your writing style. I saw that bra on TV!!! I was wondering about it. I really love that your daughter's name is scratched into your van. My son left his little baby hand prints on my sister's big screen TV and she refused to wash them off. She said she loved to see them there. Hee..
April 27, 2008 at 2:51 PM

hokgardner said…
Your ring is beautiful!

Last spring B's car was in the shop (it's a bmw), so the dealer gave him a 2-seat conervitable BMW as a loaner. I drove it every time I could pry the keys out of his hands and begged to keep it. I'm meant to drive a convertible.
April 27, 2008 at 5:55 PM

Anonymous said…
The fact that you think you don't have conflict is a tribute to your resolution skills and second-rooster outlook! You've recently juggled getting a house ready for sale while your husband worked across the country, worried about transplanting your children, told us the sale of your old house fell through, misplaced your cat, worried that your old dog wouldn't survive the trip north, and spent the better part of a day finding out that the airport was broken and you couldn't get to your children...the fact that you remain "too happy" is precisely the triumph of human nature that good writing is supposed to bring out of conflict.
April 28, 2008 at 8:10 AM

ckh said…
I got teary reading about you getting teary.

And, funny thing, I haven't been writing in my blog (on my blog?) because I feel that I have nothing good to say and too much conflict. That is why you must NEVER stop writing - even the very good Pollyanna news - because there are those of us living vicariously through your life.

MadMad said…
Awww.... it's beautiful. Enjoy the good days! There are so many, um... crazy ones!

(And P.S.: Guest rooms don't get cleaned until you're expecting guests. Everyone knows that!)