So, the response to yesterday's joy rush meme has been incredible. I mean, amazing and heartwarming and so miraculous I keep having to pinch myself. I'll be posting the entries I've gotten so far tomorrow. I figure I'll leave the contest part open for about a week but naturally, you are all welcome to compile your joy rush lists and send them to me forever. I love them.

Yesterday afternoon, Ana and her friend Jenna came inside because they found two lady bugs and one of them was "giving a piggy-back ride to the other."

They were afraid that it was because one of the Lady Bugs must not have had legs or have been able to fly or something. They wanted me to help them find another lady bug so that the injured one had another back to ride on.

Dudes. I'm going straight to hell because I COULD NOT STOP LAUGHING and they were so, SO serious. Tears were squeezing out of the corners of my eyes. I know they think I am the most heartless and cruel person ever.

Later, they came back in. "Mom, I think the ladybug is dead! It's not moving!"

This morning when I was taking Jane to school, I said, "Have I told you yet today how crazy I am about you?" and she said, "No, but you've told me I'm making you crazy."

A few days ago, my girls were having fudgesicles outside and I came out to see them standing on stepping stones, foot to foot, face to face. I came out in time to hear Jane quoting Dr. Seuss. "I never have taken a step to one side." And Ana said, "For I live by a rule that I learned as a boy back in South-going School..."

I don't know why but it just cracked me up. 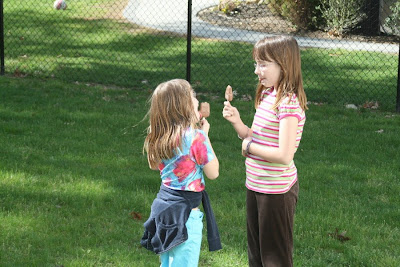 LaDonna said…
BWAHAHAHA!!! Those are great! The "crazy" one sounded like something one of my girls would say. And the lady bugs...sigh! I guess having to explain that kind of stuff is coming for you. Good luck with that!
May 16, 2008 at 3:15 PM

Ei said…
Especially for suburbancorrespondent (that is a whole lot to type with no spaces...)

I guess that's the easy part for me. We watch a lot of National Geographic. Quoth Devereaux, "They aren't playing leapfrog, Elyas, they are mating." (insert 8 year old eye roll here). My problem will be explaining that for humans there's much more than babymaking at play.