So, part of moving to a new state and a new community and a new house is putting down roots. We've all heard that old saw, right? But honestly? It's a good metaphor for me in particular because of my Frustrated Farmer complex... did I tell y'all about that? It's where I want to plant THE WORLD. I want to DRIVE A TRACTOR. I want to PLOW UP SOME ACREAGE.

But unfortunately, I HAVE A PURPLE THUMB.

(Perhaps you are not familiar with the dreaded Purple Thumb? My daughter Ana (10) introduced me to the concept --apparently purple is opposite of green on the color wheel.) (Could she BE smarter?)

Anyway, today I was feeling a tad melancholy because my friend Lin is just back from a whirlwind trip to Colorado.

Where she found a house to rent.

Because that's where she's moving. Colorado.

And I just GOT HERE!

In my life I have had just a handful or so of close friends. Really close--like the kind you could just hang out with in companionable silence, you know? And I've always known them immediately. (For Ei: I knew the way you know about a good melon.) I'm not going to name them all here (although the name Kathy covers three of them, how weird is that?) (you know who you are) but it's just that instant connection--like this is your sister, only you forgot to be born into the same family.

Well, that's how I feel about Lin.

I think of myself as a well-socialized introvert, (as I was just telling Mad Mad who promptly fell off her chair laughing at the idea of me being shy. But I really am, see. I'm terribly shy but I have great camouflage because I was an Army Brat and by God, that'll beat shyness out of you.) (Which is why we moved here to New York and uprooted our kids--they need the skills that you only develop by being dropped into an entirely new world and then being expected to thrive. Thrive, dammit! Oops. I digress. And I was already digressing.) so it's really rare for me to make that kind of connection. And with Lin? I'll actually TALK ON THE PHONE. No, seriously. She's not so much with the e-mail.

ANYWAY, Lin is moving. She really is. And no crying or denial or hoping something will happen to intervene is going to change that.

And today, I did my version of putting down roots. 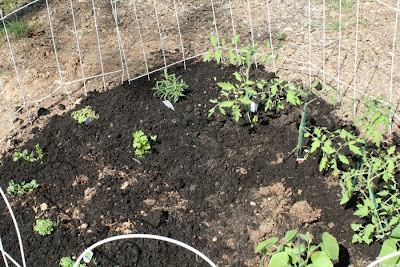 Suburban Correspondent said…
Now, if Blogger would only let me put in some pictures, you could see my post today about gardening. Alas...
May 6, 2008 at 5:20 PM

Unknown said…
Aw...honey, I'm sooo sorry. Do you get the friends she is leaving behind? I mean, that would be a good deal, if it worked wouldn't it? I have some friends in Colorado who would probably LOVE to have her :)...well depending upon what part of that teeny tiny state to which she is moving.

And as long as we are digressing and stuff, have you seen Driving Lessons, with Laura Linney and Rupert Grint (you know Ron Weasley), and Julie Walters? It's my new favorite quotable movie. Love it.
May 6, 2008 at 5:24 PM

I'm sorry your friend is moving. That's so hard. Good friends are hard to come by (as opposed to casual friends who are a dime a dozen) (and hello, let's see what other cliches I can squeeze into one run-on sentence).

Stefanie said…
The purple thumb? I've always thought of it as the Black Thumb of Death.

I think it's weird we've never talked on the phone, come to think of it.

Anonymous said…
OK, you know how shy I am (posting on a blog is really putting myself out there!). I can most definitely relate to how you feel about Lin moving because I was feeling exactly the same this week - missing you (Austin and more specifically, Barton Spring are just not the same!).

At the risk of sounding rather sappy, I really believe that we are meant to meet that special person at just the right time in our life . . . that treaured friend. Who better to help you adjust to NY than Lin . . . someone who will be making the same transition herself in the near future.

I think life is that way. We put ourselves out there in hopes of making that instantaneous connection with someone. It is rare to find someone who will listen, counsel, laugh, cry, nod,walk, understand, encourage,love, walk further, swim - did I mention get up at 6:00to do all of the aforementioned? I knew you were special when you mentioned St. Teresa of Avila in the carpool line at school . . . what are the chances?!

I am a better person for having known you and I'm sure Lin feels the same. Sorry she is leaving.