(You catch that title? Do I completely rule? Only *I* can take a concept (Wordless Wednesday) and flip it right on its arse with great pride.) (Well, okay, lots of people do that.) (I still rule.)

(Plus, anyway, technically, it's still Tuesday as I write this. See what an overachiever I am??)

So, today, I get to go to a new gynecologist.

I had gone to my one in Austin for twenty years. I used to tell him that I had a longer relationship with him than any man in my life. Ha. Joke. Get it?

He delivered both of my children after treating me for cervical cancer. AND for twenty years, he laughed at my jokes. Every. Single. Time.

We were sort of starting to see him and his wife socially (which I know MadMad thinks is the weirdest thing ever) because we just all get along so well. Plus, I love him.

But now? Off to see a new doctor.

And the first thing I get to tell this new doctor is why I haven't actually been to the gynecologist since November of 2005. That ought to be a BARREL of laughs. Because I hear that doctors really like it when you say, "I forgot."

Of course, now that I realize how long it's been, I am totally convinced that I am riddled with cancer and that this weight I've put on is not really the result of inactivity so much as it is a forty pound tumor. I've heard of tumors that can give you double-chins, haven't you? (Oh, just hush.)

Speaking of inactivity, on Monday I got on the treadmill for about five whole minutes (don't judge me until YOU'VE tried it with three screws in your foot) and then rode my bike on the exercise trainer for another 20. I did push-ups and then flailed about with some free weights. ("You'll put your eye out!") Today, I can almost raise my arms above my head, so that's all good. 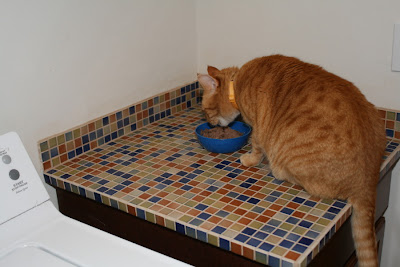 I think if you squint you can see the tile under him.

Tile, just in case you are wondering, is very strong and should support his weight quite well. But it's really slippery, so occasionally we hear the huge THUNK of a kitty who got a lee-tle too much momentum...

In fact, on Monday, I got the whole laundry room all organized and even switched the dryer door so that it opens on the correct side and just in general made that room worthy of spending the majority of my time in there. Only now I can't actually walk in there because Scout has discovered how tasty used cat litter is and I had to put up a gate.

So we can add THAT to Scout's resume of charms. Sheesh. Love that dog, LOVE him. I think we should send him a nice basket of fruit. (Okay, two movie references in one post. See note above re: me ruling.) 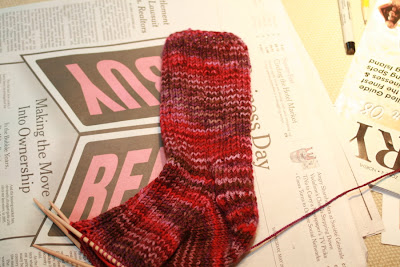 I'm also showing it because I have undo it and reknit it because I made it too small. That's okay--I like to knit and I love Ei so it's a win/win. Plus, that yarn... OH HOW I LOVE ME SOME CLAUDIA HAND-PAINTED YARN. Maybe I've said that before--like every single time I've knitted a pair of socks with her yarn?

Speaking of socks and a win/win, I have been letting Edward out even though I haven't finished the Edward socks yet. 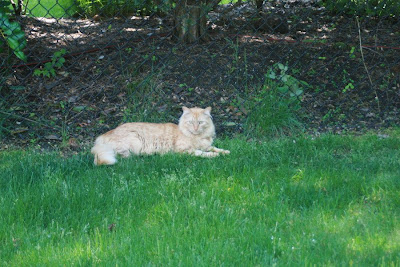 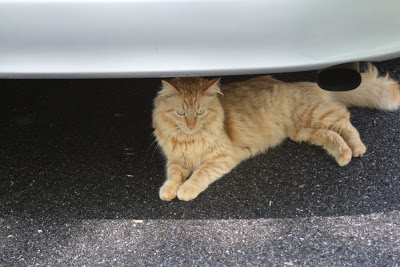 He's been sticking pretty close to home. It makes us all a little nervous to let him out --Jane and I were beside ourselves this morning when we couldn't find him before I took her to school--but there he was when I got home. Something has been restored in him by allowing him to go out. His swagger is back. Coop weighed him this morning and he weighs about what he weighed when we brought him here from Texas. (We can't tell for sure EXACTLY what he weighs because my digital scale is just a random number generator. Except if I stand on it and then it gives a mighty sigh and shows the same damn number every time.) (Which is higher than at any time since I had a child actually emerging from my body, thank you.) (Sigh.)

Okay, I have to go to my appointment. (Yippee.) Remind me to tell y'all of my new-found passion for the New York Times crossword puzzle and how I'm just sure it's going to stave off dementia.
Email Post
Labels: cats Edward humor? I don't do linear--EVER I'm Between Films The Great Cooper Move tile Why I Totally Could Rule The World Wordless Wednesday--As If

Memarie Lane said…
My last Gyn checkup was about the same time. I thought I'd get an earful from the midwife but she told me that "at my age," with no abnormal tests in the past, it was fine. Blagh.
May 28, 2008 at 1:23 PM

Suburban Correspondent said…
Online! Do the NYTimes crossword online! It's worth the 40 bucks a year or whatever they're charging me. Take my word for it - I was doing the NYTimes crossword from the tender age of eleven the old-fashioned way and I was sure I would hate this new-fangled online method of solving it. But no! It's great!
May 28, 2008 at 2:02 PM

knittergran said…
I am SO relieved to see that Edward goes outside and just hangs, as opposed to wandering off.
VICTORY for you all!
May 28, 2008 at 4:47 PM

I can never again have an outdoor cat. I have lost too many of them and I panic at the thought now. I even get freaked when we let my dogs roe loose at the cabin and they go too far out of my sight.
May 28, 2008 at 5:31 PM

Barb Matijevich said…
Kathy, you must be the last of my close friends who doesn't know that I OWN MY OWN WET SAW. I love to lay some tile. Some people like to walk into a conservatory and play a sonata. Me? I like tile it.
May 28, 2008 at 6:52 PM

Lynn said…
I don't think Edward is going anywhere. He's checked out the neighborhood and is happy where he lives. He's got it good, right?

and always remember, you NEVER gain weight when you have cancer. I keep saying I'm one of the healthiest people alive! blech.
May 28, 2008 at 7:10 PM

Miri said…
When you're done being a famous writer you could get side work as a sock knitting tile layer. We are in the presence of a Renaissance woman.

Mokihana said…
I'm so glad Edward is sticking close to home. I see the flag! His whole countenance has improved since the last photo you posted.

Annabanana said…
Now you are into crosswords - cool! You certainly must know about John McN. from the old workplace of Coop? He is a national puzzler champion. And tell me more about that tile because I just had two bathrooms repainted and I am warming up for more projects (like kitchen backsplash), I can tell. I LOVE that tile!!!

knittergran said…
And I forgot-now I'm on a hunt for the Claudia handpainted yarn. It's not at my LYS, but there are more shops in Atlanta to check out. And try some Mountain Colors Bearfoot sock yarn-yummy.
May 29, 2008 at 3:47 PM