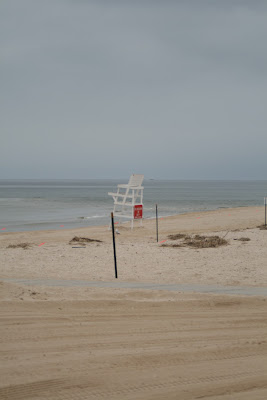 This is a post in which I once again prove that I am the luckiest woman on the planet.

Yesterday, I had a Migraine of Epic Proportions when I woke up. So I took my medication, which makes me loopy. (Oh, gosh, you people are a TOUGH crowd. OKAY. Loopy-ER. Loopier. There now, satisfied?) Only, I couldn't shake the damn thing, not totally.

But it's my parents' first visit to Long Island and I wanted to show them around a little. So, when my head finally stopped threatening to make me throw up, we set out to drive through a shore town and then we stopped to have lunch at a lovely little restaurant on the beach. Then my parents took a short walk while I, ever gimpy, sat on a bench. I took some pictures of the beach and then took out my knitting and sat and knitted for a while.

Gosh, I felt terrible. Later that afternoon, after I'd napped a little and gotten the girls from school, I noticed that I also looked just terrible. I've said before that I have Mood Hair and in this case, the mood was grim. So, on a whim I stuck in a few hot rollers and put some make-up on. When I took the rollers out, I looked JUST like Mary Tyler Moore in her Dick Van Dyke Show, Laura Petrie phase. It was so funny that I came downstairs to show Ana and I asked her if she'd take a picture of me for the blog--because I am always willing to make a total fool of myself for your amusement. (I'm very giving that way.)

Only, we couldn't find my camera.

I panicked. There are few things I love as much as my camera, you know. It's the only real THING on my Joy Rush list. (Well, okay, besides the Claudia Handpainted sock yarn. Just work with me, People.) I tore apart my car and house and concluded that I must have left it on that bench at the beach.

I called the restaurant but no one had turned it in (the guy told me a great and comforting (not) story about how his son had a camera stolen off of his shoulder in an airport once. He asked if it was a good camera. I said, "Yes."

So I took a little trip back out to the beach just to look for myself.

The whole way out there I was thinking about how I could possibly replace the camera if it was gone. And I was thinking about how if I found it, it would be a sign that everything was going to be okay--that our house in Austin would sell (after the repairs have finally been completed which has to happen SOME day, right?) and the kids would find new best friends here in New York and my husband would be fabulously successful in his new job and how my book would find its way into the hands of a publisher who would love it and want to publish it and... oh yeah, my camera.

I approached the bench where I had sat and there was a woman sitting there who smiled when I got near. "Are you looking for your camera?"

Hope began to dawn in me. And sure enough, there was my camera. Ohmygoshohmygoshohmygosh!! THERE WAS MY CAMERA, sitting on a public bench at the beach where I had left it some five hours before.

"Is this a great neighborhood or what?" said the woman.

On the way home, this song came on.

(Sorry for the annoying handclaps which were, hello, RUSHING--not that I'm a bothered by a little thing like that.)

Ei said…
No Barb...you choose having a charmed life. You could be focused on migraine pain or losing the camera and having to drive back out to find it, but...you focus instead on the positive.

Suburban Correspondent said…
The hair! I still want to see the hair!

Mrs.Q said…
That song totally gave me goosebumps. I am so going to learn it. I think it might need to be my new theme song. (I actually just typed "sock" - maybe I need a new theme sock, too?)

Lynn said…
I totally agree with EI. You could have focused on your headaches or how you lost the camera, but you focused on how you got it back. THAT is the way to live.

And I was so hoping you posted a picture of your Laura Petrie hair!

I think this just inspired a post of my own, actually.

hokgardner said…
After spending a all day yesterday and this morning dealing with Danskin triathlon-related problems and stupidity, this really, really reafirmed my faith in humanity.

TexasPeach said…
First Edward and now your camera. Ya have to say that those NYers aren't too bad now are they? I agree with those above...your attitude is perfect...you took a day that could have be awful and saw the good in it! Yay Barb! I am betting that all those other things you mentioned are coming soon..two great signs can't be wrong can they???
June 7, 2008 at 6:23 PM

Thanks for the smiles. I am a follower now too!

Unknown said…
I'm so glad that you found your camera. Mine was stolen a couple of years ago, and even though I replaced it with a newer model, I still miss my old friend.

Sherry Sea from Austin said…
I'm glad you got the camera back. Back when cameras came only very heavy, very analog, and very expensive, I left one on "the tube", that is a train on London Underground. But it was turned in by some good soul. It happens!
June 8, 2008 at 8:15 AM

LaDonna said…
Oh, Barb! That really is an amazing story! Amazing that your camera was still there and this wonderful woman (was she an angel??) was sitting there as if to tell you that all of those things you were thinking were going to happen. It really is going to be alright, girl! It is!

Barb Matijevich said…
You guys are seriously making me laugh.

There are no pictures of the hair.

Because when I discovered I was once again doing celebrity hair impersonations, I had no camera. And after the panic of thinking that I'd lost my beloved camera, my hair went straight.

TheOneTrueSue said…
Now all you have to do is wait for the rest of your "if I find it" stuff to happen. Because clearly it's gonna happen. You have some seriously good karma.
June 10, 2008 at 2:11 AM

ckh said…
I was wondering what the woman sitting on the bench with the camera must have thought when Laura Petrie showed up to claim it - thinking "This is some neighborhood, isn't it?"

You inspire me to think of the charmed parts of my life rather than focusing on the easier bummer parts. It's all a matter of perspective and yours is amazing. This is, of course, why you have so many fans.
June 10, 2008 at 12:29 PM