I was going to post a lot of random updates today but I can't.

Because last night something really lovely happened and I can't get the vision of it out of my head so I have to tell you about it.

See, my girls have been playing with bubbles this week. Just those cheap bottles of bubbles from Wal-Mart or wherever, occasionally refilled by Dawn dish washing soap. The weather here has been incredible --dipping into the low sixties at night and peaking at around 80 degrees during the day--and the girls have really enjoyed being outside.

So, first the girls started playing a game where they would blow the bubbles and dance around in them. (I overheard Ana (10) ask Jane (7) in all seriousness, "If you had a butler, would you ask him to stand and blow bubbles so you could dance in them?")

Soon they realized that if they run as fast as possible across the yard, a trail of bubbles will shoot out behind them. Then they started pretending they were fairies and the bubbles were wishes. The fairies would READ the wishes and pop the ones they deemed "greedy."

Last night, as it was getting dark and just cool enough to think about coming inside, the girls began spinning around, enveloping themselves in bubbles and laughing like mad.

And right at that moment? The fireflies started to light the bubbles up. I've never seen anything like it. It was simply...enchanting. So incredibly beautiful.

Almost as lovely as the innocent, awed, luminous faces of my two daughters. 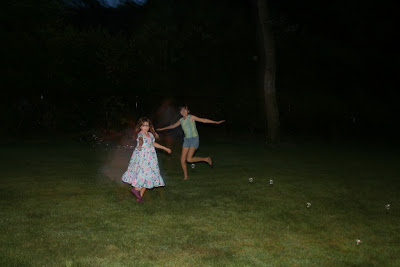 Sometimes I wish they didn't ever have to grow up.
Email Post
Labels: family gifts kids My Personal Fairy Tale parenting The Great Cooper Move

Katie said…
I would love to see fireflies someday....I can just picture the whole scene in this dreamy imagination of mine.

LaDonna said…
Oh, that is just too sweet, Barb! Don't you just wish you could bottle a little of that to keep forever? Sometimes, I want to just hide my girls away in a little bubble so that they can stay this way always, never having to experience hurt or disappointment or betrayal or any of those other things that come along with growing up. Then, they could chase bubbles and fairies forever.
August 24, 2008 at 1:02 AM

Nadine said…
How wonderful! I can only imagine the beauty of it. Thanks for sharing!

Suna Kendall said…
Thanks for posting this. I did your meme yesterday, and inspired two others to do it, too. The odd thing was that one friend and I each kept two of your answers--the one about sarcasm and the one about hating that we cry when we are angry. That one must happen to a lot of us.
August 24, 2008 at 12:36 PM

Ann in NJ said…
Charming. As much as it took me years to say that I'm from New Jersey, there are a lot of things I really like about it. And fireflies and beautiful summer evenings are WAY up there on the list. We've had some nice ones lately!
August 24, 2008 at 5:40 PM

Mrs.Q said…
If I had a butler, that would totally be his No.1 job. I'd rather have a pool-boy do it (ahem) but perhaps I'll wait till your girls are a little (lot!) older to mention it in their presence!

Anonymous said…
You know, as much as I'm reading about sibling rivalry (and I know all about it - I have a sister that is 2 years younger than me - we were horrible to each other), I'm finding recently, for the first time, I really wish Jessie had a sister.
August 25, 2008 at 10:00 AM

MadMad said…
And other times....