On the Launch Pad

So, my mother-in-law has been visiting and the Olympics have been on so I haven't had time to blog except in the recesses of my brain. Which, of course, ended up being eaten (drowned?) by the amount of wine I've consumed. It's a pity because there was some darn good stuff there. (Well, at least what I recall.)

The big news around here is that my husband threw financial reason to the winds and bought me a stationary recumbent bike. I've needed one (since I am so gimpy and cannot exercise in my old, breakneck, throw-some-Ben-Gay-at-the-pain fashion) but we've been treading a bit lightly financially since our house in Austin (stop me if you've heard this) still hasn't sold. Coop did the research (of course he did) and then found a bike he thought would be a good one on Craig's List for about a third of the retail price.

This all coincided with two other events. One is that Ei issued a challenge on her blog about daring not to label oneself, based on this book she'd read called The Daring Female's Guide to Ecstatic Living and I bought the book. I've been reading a little bit every night (so inspirational) and basically, the one that really spoke to me was "Dare to Rise to Meet a Challenge."

Meanwhile, Mrs. G of Derfwad Manor issued a fitness challenge which I cannot name here because this is a family blog. (Ana, do NOT click on that link.) It has something to do with her hiney and reducing the size of same.

THEN, my mother-in-law took the single most unflattering picture of me that has ever been taken --and that includes photos taken of me after my sister cut my hair when I was in second grade. I don't think my MIL took the photo maliciously or anything, and I also don't think that I'm QUITE as fat as this unflattering angle shows. (Maybe.) (I hope.) But the fact that I even HAVE this angle is totally unacceptable to my vain little (HAH!) self. 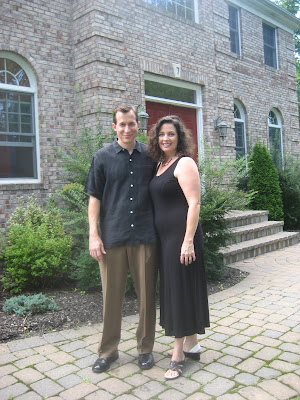 I can't tell you how embarrassed I am about that picture. I've deleted it and reloaded it about 70 times because I feel like it's important to keep it real here, not to mention honest, but also? I don't want y'all to think I'm fat.

So, Friends? I am launching my come-back. It's going to involve some tears and sweat and maybe giving up cream and sugar in my coffee (the horror!) and apparently, some really hideous pictures of me posted on the Internet because I.

I wouldn't count me out yet, though, because sometimes, being completely spastic and over the top in all things can be GOOD.

I am trying to come up with my own clever name for MY Booty-Reducing Effort but currently, I am in the "Trying Not To Cry Because I'm So Freaking Sore" mode. I hear name calling--er NAMING comes in the next phase.
Email Post
Labels: A picture is Worth at Least Ten Words Aging Gracelessly Coop Enough With The Whining Already Freaking Fat Genes the Glamah of it All

Jolly Roger said…
Oh my dear, I am with you! You who have the guts to post that pic - yay you!

And I'm not going to eat that 6th chocolate chip cookie in your honor - probably. Maybe. I think.

DK said…
You are beautiful. Then, now, always.

Okay, that's also not the most flattering picture of Coop, to be honest. I'm just sayin'. And no one thinks you're fat but you.

You know I always support your efforts at health. And I so love the Coop and the bike and Craigslist story (of course he did!). Just be careful out there. Mind your foot. And don't get run over by a recumbent truck or anything.

Lynn said…
DK: I agree, she's beautiful. And "recumbent truck" jokes are still funny at five minutes to six. Just in case you were worried.

Barb: You're beautiful. And soon you will be beautiful and recumbently fit, which will make you happier and even more beautiful. We promise to still like you when you are.

If you're looking for cross training, may I recommend painting one wall late on a Sunday night with a 2" brush? Assuming you can find a way to get up and down the step stool without further damaging that foot and ankle.
August 13, 2008 at 6:54 AM

Suburban Correspondent said…
It's the dress. Anyone would look chunky in that dress.
August 13, 2008 at 7:35 AM

hokgardner said…
Recumbent truck! I snorted coffee out my nose.

And I think it's a lovely picture of the two of you. I don't have any good pics of me and my husband together, mostly because the man simply cannot manage a normal smile for the camera.
August 13, 2008 at 10:04 AM

Marion Gropen said…
Give yourself a break -- you're lovely.

But I'm sure I'm not alone when I say that I'll be happy to cheer you on as you continue your quest for fitness.

In fact, you're inspiring me to go work out on MY recumbent bike. As soon as I eat breakfast. And do a little other stuff. . . . Or tomorrow.

I need to visit Craigslist my own self. And hug Coop for me. It's wonderful that you have a partner that hears you and supports you. Peace and love sweetheart.
August 13, 2008 at 10:23 AM

LizzieK8 said…
You go, girlfriend! BTW, I don't think you need gutz to post that pic. You look lovely!

You look good. Gooo-oood. But I'm right there with you on the project. We are looking forward. Go BARB!

Also, when I went to assess my own situation, I was no more able to assept the word of the day than you. So I have been interchanging heine, behind, rear, etc. It is shocking how many words for the human posterior we have. Shocking.

Way more shocking than your before picture.

Anonymous said…
Oh! We have one of those recumbent bikes! I just can't say enought about them! They're fantastic!

Stefanie said…
Fat, m'dear, is the WRONG word to use. I do not think you are FAT. I think that you are the most beautiful woman who is an absolute inspiration to me, your husband, your two wonderful daughters, and everyone else you touch. Because you are just wonderful.
August 13, 2008 at 5:27 PM

Mrs. G. said…
Remember that the camera adds at weight-I think it's somewhere around 40 lbs.

ktmay said…
i just think it's so dang awesome that you'd post a pic of yourself that you hate. that rocks big time. you don't actually look bad, but i can relate to your feelings. i am the least photogenic person on the planet. from certain angles, i look like a cow. but i know i am not a cow. and YOU are not a cow! it's just bad angles. the best pictures taken of me are when people are on higher ground than i am, so i am looking UP at them...just a tip!
August 16, 2008 at 4:15 PM