Okay, I'm Over Myself

I awoke this morning with a renewed energy and zest for life in New York. I think yesterday was just a bout of normal homesickness for all that was familiar back in Austin. It wasn't a crisis; just a dull ache. Maybe that's to be expected--after all, I lived in Austin for more than half of my life. Things are good here, though.

This renewed enthusiasm today may or may not have something to do with the fact that it is SIXTY DEGREES here. In August. Sixty. Six-oh. In Austin, we'd see that in January. Maybe.

Also, I had to go buy bagels this morning and there is nothing like a New York Deli to convert you to nothing but love for your fellow New Yorkers. Dudes, the food here...! But it's not JUST the food. No, really. It's also that your average New Yorker, who has some sort of trigger (middle) finger in traffic? Is willing to wait, and wait PATIENTLY, to get his deli order exactly right. He wants one egg white and one egg with salt and no pepper and no cheese on an 'everything' bagel and he's not leaving unless the ratio of egg white to egg is exactly perfect. He might even make a little small talk while he's waiting. But he will NOT become impatient. Because getting your breakfast just exactly right is important.

I so respect that kind of commitment in a populace.

And then, too, at the bagel place, I discovered a new food. This does not bode well for the Booty Reduction Plan, which is sort of sucking wind anyway, due to some further foot setbacks. And now, this: 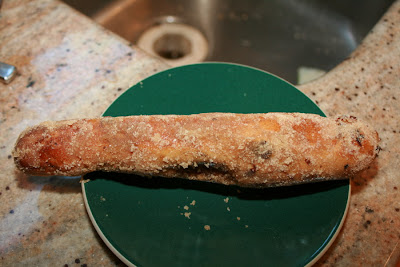 This, my friends, is a Cinnamon Stick. It's a cinnamon-raisin bagel that is coated in butter and cinnamon sugar. Did you already know about these? Because if you did and you didn't tell me, I am so crabby with you. Um, or grateful-- it's a toss-up.

Also this morning, I heard the counter clerk say "stayin' or goin'" to the guy next to me and she said it in such a strong New York accent that even HE didn't understand her.

After he asked her to repeat herself ("Whut?"), he gave the right answer. "Stayin'."

Anonymous said…
So my booty reduction plan is coming along. 4-1 hour walks last week and one already this week and the really good news is that my legs only hurt 1/2 as much as the end of my walk as they did last week! The human body is a miraculous thing!

I've been sending you "love of all things Autumn" vibes, hoping that you would feel better and it looks like they worked! Glad you're feeling less melancholy.

Anonymous said…
ahhh, the wonder that is... cinnamon stick!

Unknown said…
my MIL has a New York accent (upstate_Watertown) and watching her interact with the townspeople when she came to visit me in West Virginia was a hoot!She went into the hardware store and asked for a hose and they brought her to the hoes, then the roses, then just looked at her blankly. When i located the hoses they all laughed and every time I saw the clerks in town after that they had a chuckle about the lady with the funny accent.
August 26, 2008 at 12:47 PM

Anonymous said…
I've been reading your blog now for quite some time. Each time you mention homesickness it strikes a chord with me. I left Texas for 2 years following getting married. My husband lived and worked in MA. I had such terrible culture shock. I applaud you for being able to persevere through that Northern way of life. I just couldn't do it. I cried every time I came home and saw the big Texas sky. Lyle Lovett played continuously on my CD player. I was born and bred here. Luckily, my husband was able to office from Austin and so we were able to move home for me. I am also so lucky as he loves it here too and can't imagine living elsewhere.

I do so wish you all the best embracing your new environment! You inspire me.

LaDonna said…
So glad to hear you're feeling better today. Yes, sometimes it just takes the tiniest new pleasure to pull us out of our funk and back to being our usual happy selves. Glad you found the cinnamon sticks!

hokgardner said…
Homesickness is to be expected. But dude, stop bragging about the cool weather.
August 26, 2008 at 2:35 PM

Ann in NJ said…
Every now and then it's good to feel sorry for yourself. Better to get it out of the way all at once than to have it simmering in the background all the time. Homesickness never really goes away, I haven't lived in Idaho for almost 20 years - and yet I do miss it on occasion.

And yes, the weather has been LOVELY. I'm going to have to check out our local bagel stores for cinnamon sticks, I've never seen them around here. Yummy...
August 26, 2008 at 4:59 PM

Ei said…
Love you, Barb. These pithy, beautiful posts. They make me cry.

And now I want a bagel.

And I also want to call out whoever is reading from Lubbock...I have beautiful loved happy people there, therefore, Lubbock is a good town.
August 26, 2008 at 6:50 PM

Lynn said…
I never knew people could wear cordouroy in Sept until I lived in NY. However I don't miss the snow and COLD of NY. but the food. I miss the food the most. Can't get a good deli like those in FL that's for sure!
August 27, 2008 at 12:49 PM