We have a new sitter helping out during the summer. I was a little worried about her at first because she's the daughter of one of my husband's clients and I was worried she'd be some sort of privileged, spoiled, surgically-augmented rich girl with an attitude and I was going to say something unforgivable that would make my husband leave me, just when I've cut off my only source of income in the past ten years.

But she turned out to be this really creative, well-spoken, enthusiastic beautiful girl. She does drive a luxury SUV, but you know what? My girls will probably drive vehicles that far surpass my own first car--a 1977 Volkswagen Rabbit with electrical problems so severe that I once turned on the radio and smoke began billowing from the cassette deck. My parents loaned me the $1700 to buy the (vastly overpriced)thing and then forgave me the debt as my graduation present. Which was only prudent considering I'd spent so much money on the car that there was no way I could have paid them back unless I deferred my first year of college and no one, I mean NO ONE, wanted THAT to happen.

Back to my new sitter, though (bet you thought I'd forgotten), she turned out to be great. And she's a writer and she likes the girls and in general, I have great hope that we'll have a fabulous summer. For one thing, she's already pitched in and helped me put the feet on this (note the drill left artistically on the floor): 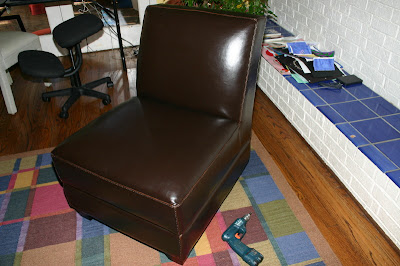 The girls call the new chair the "slippery chair" because it doesn't have arms and therefore, they tend to slip right off it. Of course, if they didn't BOUNCE their way on and off of it, they might stay put like normal people. But I digress again.

Anyway, the thing about our new sitter is, just like any time I have new people in the house, she made me see our house through different eyes. And what I saw wasn't so great, not just because the place was fairly untidy because of my long stint on crutches when I couldn't put stuff away, but also because my style, which I usually call Early Preschool, left something to be desired.

But then she paid me the ultimate compliment. She took my girls out to dinner one night (while my book club came over and did what all book clubs do: drank a lot of wine) and when she came back, she told me that she'd run into this other family who had also offered her a babysitting job for the summer. "But their house was one of those...manicured, gold kinds of houses where you are afraid to touch anything and I just didn't think I could work there."

I mean, I know she's saying that MY house is not the kind of pristine, coordinated, designer kind of home of the other family. But see, that wasn't ever my goal. Seriously! No, I totally take that as a compliment. I never wanted a house where you could walk in and not know that children lived there. And I never wanted a house so sterile that people were afraid to come by and hang out. Sit on the furniture. Straighten a picture. Pet a cat. Wipe up Scout's urine.

Small things, you know. Like when Corduroy sees Lisa's room for the first time and he says, "This looks like a home. I KNOW I've always wanted to live in a home."

(Oh, dear, now that I write that I wonder if he didn't say it another way. Because, well, there are homes and then there are, um, Homes. As in Home for the Criminally Insane. But not a nice bear, right?)

hokgardner said…
OK, I'm scared - you have our chair and our living room carpet. And my girls use the chair as a slide and springboard.
June 9, 2007 at 9:56 PM

Damsel said…
Bwahahaha @ Early Preschool!!! That is soooooo me!