I know I am strange.

But, um, I think we have appliances in this house that are out to get me. No, seriously.

It's not just the Polaris, otherwise known as the pool sweeper. Our Polaris has some sort of sixth sense --well, I'm not really sure if Polarises have senses, exactly, but this one has some extra little radar that lets it know when I'm standing outside and not wearing waterproof shoes. I could be standing on the screened-in porch, and the dang thing manages to spray me with water. This is not just MY persecution complex--honestly! Other people have remarked on it as well. In fact, it's become such an accepted thing that now when one of us returns from doing something in the yard or some sort of pool maintenance and we're soaking wet? Someone will say, "I guess the Polaris won again, huh?"

Recently, our coffee maker developed a short in its on/off switch. Despite the fact that it's one of those programmable ones that tells the time, has an automatic shut-off (always a good idea when dealing with the absent-minded Coopers) etc., we were down to plugging it in when we wanted it on and unplugging it when we wanted it off. Finally, I just gave it away to Goodwill and got out the old one, from which I had upgraded, or so I thought.

But I wasn't even talking about that. THIS is truly kind of spooky.

My husband bought a new five-disc DVD/CD player earlier this year and it's, well... it's ALIVE.

It can turn itself on! And if you're watching a movie, sometimes it will stop and go into something called "party mode." I don't know what that means but don't you think that's ominous? I mean, especially since it will happen even on a school night when there are no parties happening?

One night, as I was doing my usual insomnia rounds, I heard this very scary bump, bump, bump coming from the living room. Given that our best form of defense is Scout, who frequently sleeps deeply if he's had enough exercise, I approached the living room with an umbrella held at "ready."

But no, it was just the DVD player trying to open against a closed cabinet door.

I'm just not sure if this means that we've got ghosts with serious night time entertainment needs, or whether our house is so boring, even the appliances are trying to stir up some excitement. 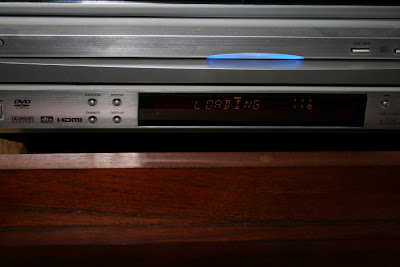 You know what would be hilarious? I should take the DVD player out by the pool and plug it in. Maybe set up some kind of time lapse photography (since I sat in front of the dang thing with a video camera periodically all day trying to capture its weird power on tape so that you could see I wasn't making it up.) Dudes, it would be the battle of the possesed appliances--only one can survive!

I'm betting on the Polaris. My shoes are STILL wet.
Email Post
Labels: humor insomnia Life in the Modren World love My LIfe as a B Movie parenting real world

Suburban Correspondent said…
Poltergeists. Definitely poltergeists. We have a car lock poltergeist, ourselves. We can just be walking by our car, and suddenly we'll hear it making that "k'chu, k'chu" noise as if it is trying to lock and unlock it self.

Stefanie said…
I, however, have mastered the mind controlling skills over the summer necessary to ward off the polaris. I will endeavor to teach you, grasshopper. ;)
November 9, 2007 at 11:09 PM

Ei said…
Oooh, we had a car whose locks completely flipped the heck out when I was a kid. Scary stuff...felt like I was prisoner to Christine.

Maybe it is time to move. And buy new appliances, huh, Barb? I don't have anything like that going on in my life right now. Unless you count the fact that sometimes I can't respond to your blogs at all for some strange reason. But that is really still *your* evil device, isn't it?
November 10, 2007 at 10:01 AM

Anonymous said…
we have a 5 cd player that is a brother to yours, complete with party mode. it's connected to a surge strip so we can kill the power if it's getting too rowdy!
November 10, 2007 at 11:39 AM

Anonymous said…
You know, I did a little research when WE had a ghost. She's gone now but she only picked on Mark. One time, she locked him in the basement! Ghosts, spirits, poltergeists, whatever start with the person who is always home (or home the most) in the family (or so I read). This makes sense in your case, right?

Anonymous said…
Two nights ago my dh fell asleep in the study chair and from thence took to the study (spare room) bed. The following morning he asked me at what time I'd come down and switched off the tv and the sattelite box. Of course I hadn't!! At first he didn't believe me them proclaimed we have a poltergeist.

The following night I woke up in pitch blackness. No lights at all on the landing but the clock was working, so I figured just the ceiling lights had blown, switched the bedside lamp on and that went bang with a bright flash.

It was all sort of spooky esp as our electrics are quite new.

(I do actually wonder if we do have a ghost because things are always going missing in this house - but I don't like to talk about it, especially at night, oh and also I don't believe in them!)

My DVD player also frequently does whatever the hell it wants to do, which is not always what *I* want it to do, and often without any sort of remote pointed at it at all.

My parents had a similar mystery, with the overhead light and the fan (which are very high, so they have a remote) in their living room, which would turn randomly on and off in the middle of the night. They finally figured out that it was the signal from their neighbor's garage door opener. Kind of a shame we didn't open their garage door every time we turned the light on - that would've been even funnier!!
November 10, 2007 at 4:49 PM

Sarahviz said…
We have a possessed car. The inside lights flicker on and off at totally random times. But only FOR ME. Hubby never witnesses it. I swear my car is out to get me!
Is there medication for this?
November 11, 2007 at 8:23 PM