(Okay, so the song doesn't quite work if you substitute in "Long Island" but work with me here.)

We're here. We had a direct flight but it left at 7:00 this morning so we got up at 5:00 and just rushed out the door, stopping to throw the van keys and a list of Acceptable Brands of Pizza for Cooper Girls at my mother. She's a saint, obviously, and I was forced to threaten one Jane Cooper with the loss of her Webkinz privileges for a MONTH if she isn't absolutely charming and cooperative. She loves her Mutti but if I'm around, she doesn't treat her very well. And as I told Janie, "that's my mommy and just like you wouldn't let anyone be mean to ME (right? RIGHT?), I can't let you be mean to HER." She seemed to understand I meant business.

I had to bring an extra suitcase this time, mostly because I had to bring so many winter clothes and they take up so much room (It's supposed to snow here on Sunday. The rental car came with a complementary ice scraper.) but also because I love our Realtor here and I had to bring her some Texas treasures. I brought her a copy of a magazine called Austin Monthly, and some salsa, and some Central Market tortillas (to die for) and a copy of my book. I figure she'll be the one that helps us find the setting for the NEXT book, right? 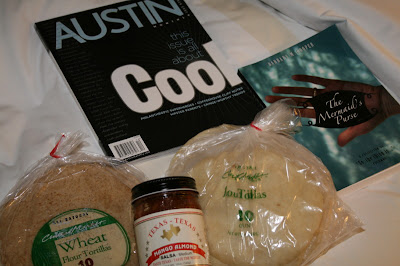 Anyway, the flight was pretty uneventful, except the cloud formations were so incredibly cool. You know how sometimes you can look out of the window of an airplane and see exactly how we're on a PLANET? Like you can see the atmosphere swirling around... Okay, well, maybe not. But look how cool: 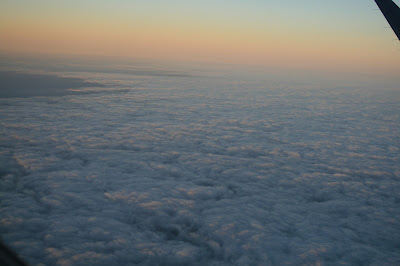 I worked on my dad's sock. Still. More. Endlessly. I did turn the heel but given that it took me three tries to knit the heel flap, it was sort of anticlimactic. Anyway, here's the current condition after knitting on it for three hours straight. 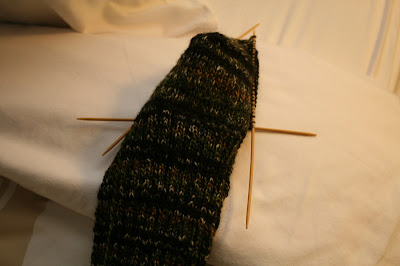 The problem is that the needles are SO small and it's such a lot of stitches, you feel like you're knitting in place much of the time. But I am plugging away at it and do you know why?

Because I have THIS as my reward: 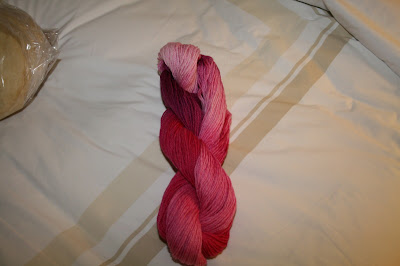 Wanna see it up closer? 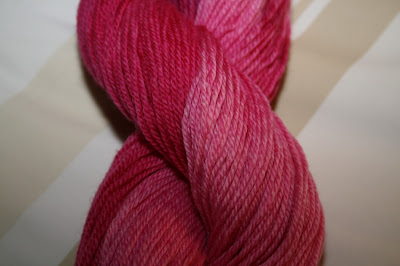 (It's a Lorna's Laces but I don't have the band so I can't tell you what flavor it is.)

Anyway, Coop has gone off to his meetings and I would go out exploring but I'm still fighting a migraine. Which sort of put the kabash on me searching for local yarn stores out the best schools in the area. I've talked to our Realtor (have I mentioned that I love her?) (Have I mentioned that she has laryngitis? Because, I think I've said before that she's the fastest talking woman I've ever met and I would think laryngitis would really cramp her style, you know? But she's STILL funny and STILL just like a Roadrunner in her energy level.) and we narrowed down the list of houses we were going to see tomorrow, because she drove past all of them and could tell me which ones were on busy roads, etc.

Yesterday in the evening, Ana's school choir performed at the local Barnes and Noble as a part of our elementary school book fair. I was thinking about how much I love the things our school does --even the fund-raisers!--and how we've had a very fun adventure as a young family in our wonderful little community. I got sort of wistful. But you know what? I absolutely believe that we are making the best decision for our family to move here. And I think this next chapter is going to be the most interesting one yet. 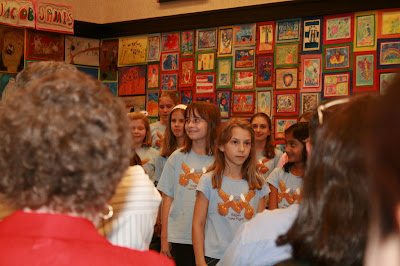 Suburban Correspondent said…
Barb, you're going to be meeting a lot of other people up there who speak just as quickly as your realtor. Maybe faster. Whenever my family comes to visit us here from NJ, I automatically speed up my speech and forget to slow it down again until Larry gently points out that he cannot understand a word I am saying. So, people in NJ/NY not only speak faster, they can hear faster too.

Oh, and I LOVE the yarn.

Becca said…
Effective immediately - I will be referring to my yarn colorways as flavors.

Also, I totally got your "planet moment" on the plane. That's exactly the right explanation.

After reading this blog for a few months, I'm amused that you are moving to NY the week that we find out we are moving to TX.
November 30, 2007 at 6:07 PM

LaDonna said…
Is that the yarn for Ana's pink socks? I would assume so, and she's going to LOVE them! I don't care what the band says, I'd call it Strawberry Taffy (G!)

In the past 7 years, I've moved my family across the country (well, halfway across, but anyway) twice, so I understand just how excited, nervous, excited, scared to death, excited, freaked out....oh, and did I say EXCITED? you must be.

Stefanie said…
Oh I wish I had been able to go to see Ana in her choir, but I was sick. :(

Ei said…
Oh, are you having FUN? Is it just wonderful? If not will you lie to me, because I desperately need some sweet lies to get me through?

When I met my ex-husband I was saving my money to move to NYC with a friend. It was central to everything I was doing with my life at that moment. And then POOF! somehow I ended up a mommy living in Iowa. Now I wouldn't trade my boys for the world...but I have to say I'm kind of envious.
December 3, 2007 at 5:06 PM