As motivational as it is to look at the picture I posted last night (in an OH THE HORROR kind of way), I really can't stand it. Here's another one taken that same night where, oh, look! I have a waist. 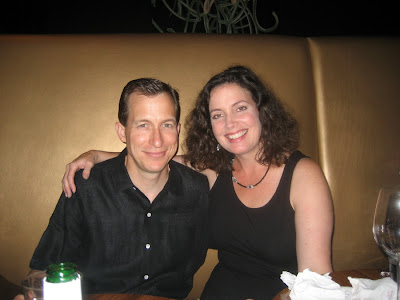 Coop and I were out on a Date Night at a work function for his company when the photo was taken. It was the coolest thing--a cruise around Manhattan. (Not to be confused with a cruise around STATEN ISLAND which is what I told everyone we were doing. They must have been a bit perplexed because from what I hear, this is not really the stuff of celebratory work functions.) We came really close to the Statue of Liberty, which is just so incredibly amazing and impressive and regal, especially at night. I've seen six million pictures of the Statue of Liberty but there is really something about seeing it in person.

The tomato crop is starting to come in: 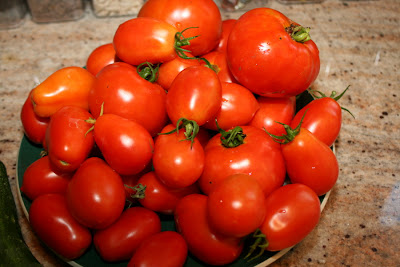 I could not be happier. Dudes, my whole LIFE I've been waiting for this! I have visions of tomato relish!

The girls' basement book nook has taken shape. Initially, I tried to set one up in the basement and I ordered the bean bags, etc. only to realize, when my husband pulled out his golf clubs after storing them in the basement and found he had some kind of Chia Club thing going on (seriously, green stuff was growing on his clubs), that the humidity/moisture factor in the basement was NOT a good thing for books. But we bought a second de-humidifier and my brilliant husband found a way to connect one of the de-humidifiers into the drainage system so we don't have to remember to empty it all the time (a set-up to fail if ever I've heard of one) and the humidity is down to 40% now. So we moved the books down and set up the Book Nook.

The kids LOVE it. Little readers: 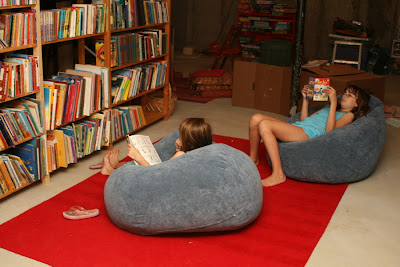 I went to the foot doctor last night and got a shot in each foot. Fun times. I'm hopeful I am on the path to pain-free walking, though. Because it occurred to me as I was driving home (very low blood sugar) that this has been the worst year of my life when it comes to physical distress, limitations and pain. It trumps the Cancer Year AND the year I did 20 weeks of bedrest, combined. If it weren't for that light right there at the end of the tunnel, I think I would just give up. Okay, maybe not, but dudes... what a long year it's been.

On the Bum Reduction Project (BRP), the past two days, I did 20 minutes on the bike (of which my sister requested a picture and so, in my patented picture within a digression/aside (soon to be an Olympic sport) I am providing a picture of same: 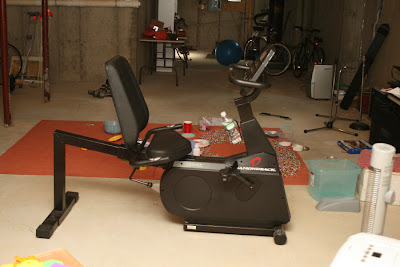 Note that Jane's latest Iron Bead sorting project is going on behind the bike.) and yesterday I added 75 crunches and 15 push-ups. It's not much, but it's a start. Today I am having a bit of pain so I am skipping a day so that I can hit it hard tomorrow. Tomorrow I will also start my new eating plan, which isn't anything so complicated. I'm just going to do the "cut out desserts and eat smaller portions and up the steamed veggies and no eating after 7:00 PM" thing. And writing everything down. I'm not very good about that but it seems to be a key part of any successful reducing plan. And maybe I'll do some sort of weekly update so that y'all don't feel like falling down and swallowing your tongues every time I bring the subject up...
Email Post
Labels: Bum Reduction Project foot Freaking Fat Genes The World According to Jane Wordless Wednesday--As If

hokgardner said…
I am SO envious of the book nook and the cruise around Manhattan. That is on my list of things to do the next time I make a trip up there.

DK said…
See, now, that? Is a proper picture of you and Coop.

I also love that your Manhatten cruise turned into the Staten Island Ferry in the telling. But it looks (and sounds) much nicer.

Also love the tomatoes. And the book nook (a little jealous, frankly). And the bike.

ckh said…
Do all of those books belong to the girls? I would give someone's little finger to have that room.

MadMad said…
Love the book nook! So cute! Good job on the biking! I couldn't tell from the picture if you had a TV in front of it, but I have to say, it really, really helps - and then a DVD player, so you can watch shows you don't/didn't have time for in real life, and commercial free! It makes it much, much, much easier to stay on that bike, I promise.
August 14, 2008 at 8:48 AM

Janette Jones, Studio California said…
I recentley lost 20 pounds (over 6 months)by just adding salad to lunch and dinner! Just have washed lettuce in the spinner in the fridge and assorted veggies chopped and ready (tomato anyone?) Then at meal time make a large plate of salad and add a little of what everyone else is having right on the salad plate...don't leave much room. You don't feel deprived especially if you find a really good low cal dressing...like Paul Newman Light Balsamic...good luck and you look beautiful in both pics!
August 14, 2008 at 9:42 AM

knittergran said…
Gorgeous picture of the two of you! And about the previous picture---I have a black dress similar to yours and it does the same thing to me. Evil, evil dress.
And on another topic: I and ditsy parents everywhere thank you!
August 14, 2008 at 1:53 PM

Marie said…
First, you look beautiful in BOTH pictures!! Be good to yourself, you are a beautiful girl.

Second, your Coop is very handsome. Having the same last name, all my kids are Coop to someone or other. So I have handsome &/or beautiful Coops too, but yours is a particularly lovely specimen. :)

Third, was it the Circle Line you were on? I worked for Circle Line during the summers when I was in college (over 30 years ago!!!). That is where I met my husband, who was a deckhand and eventually became a captain there.

Suburban Correspondent said…
You look great! And I covet your exercise bike. I would get one, but we can't figure out where to put it. (There - that's the dumbest excuse for not exercising that you will ever hear.)
August 14, 2008 at 9:45 PM