And now for something completely different.

I need to confess to using Performance Enhancing Substances.

It's true. My name is Barb and I'm on a whopping case of steroids and if I may just say so, I now get the allure. Today, I went to the MALL (ME! The MALL!) and I tried on SWIMSUITS! (ME! SWIMSUITS! AT THE MALL!!) and I didn't come home and CRY. (ME! Swimsuits!! At the MALL! NO CRYING!!!)

Though some freak accident that could only happen to me, I lost my swim suit when we were in Alabama. Now, granted, it was the one I bought after Jane was born in 2000 but it was still in good shape and more to the point, it was the most only flattering acceptable one of all of my swimsuits. (As in, I could bend over and not moon the world with a flash of flesh so blindingly white that it would alert the national security counsel that someone was signalling aircraft.)

I tried to buy a new swim suit last year but my husband painfully told me that the suit was an "old lady" suit. (It had one of cute little skirts! Jane had one with a skirt! She looked adorable!)

And then my mother said, tactfully, "My GOD, that suit is unflattering. At first I thought, 'how much weight HAS she gained?' But now you look like yourself again." I decided to ditch the suit.

Call me crazy, but I can take a hint.

But anyway, my suit disappeared in Alabama and all I can think is that it either blew out of my FIL's boat OR the ghost of Henry Wells stole it as retribution for disturbing his haunting grounds. Whatever the case, I had to have a shot of tequila and head to the mall. (Just kidding about the tequila. Really.)

I will spare you the picture of ME in my new suit but here is the suit itself. 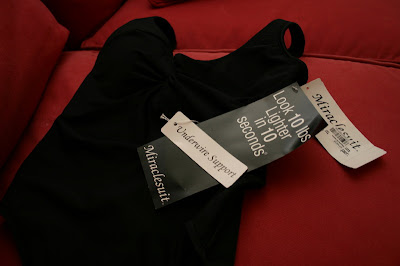 That's a terrible picture but you can picture it, right? Basic black. No skirt.

Take a closer look at the label, though. 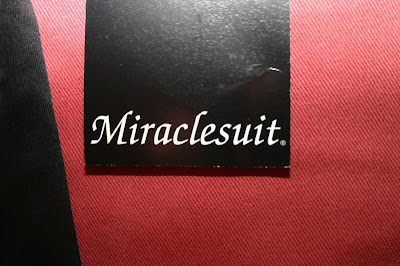 I don't think I have to say anything more, do I?

I would have been very much more depressed but I'm on this incredibly large dose of steroids because of the setback with my foot. I saw my wonderful doctor yesterday. (His wife gave birth on Tuesday for those of you keeping score at home. Little boy. Reed. SO CUTE.) Anyway, not only am I on steroids for the tendinitis in my foot, but I am also back in the infamous Boot. Only I had to get a new one because my old one wouldn't hold air anymore. (I swear this isn't because I washed it. As far as the insurance company knows, anyway.) Here it is: 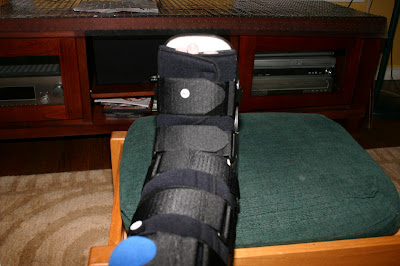 And if you look carefully, you will see a little label on it. 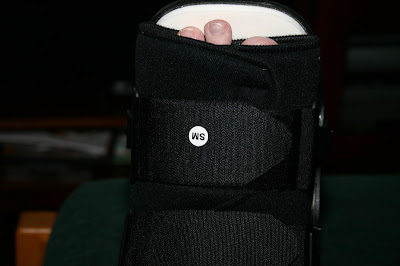 (I tried to rotate the picture for you so that you could see the label without getting a head rush but I couldn't do it.) Anyway, the label says "SM." Despite the fact that I went bathing suit shopping today, this does NOT stand for sado-masochistic. It stands for SMALL.

Yes, indeed, my FEET are small enough to be labeled as such.

And given that I haven't exercised since January when all the foot mess started, and given that I've been doing a fair amount of EATING here in the Land of Denial, not to mention DRINKING (It's summer! I'm on vacation!), it is the ONLY part of me that can carry that label.

Luckily, the steroids are totally making me feel like Ah-nold in The Terminator. Nothing can get to me --at least for the five days I'm on them, right?

My pledge is that by the end of the year, my new bathing suit will be too big.

Read my lips and make my day and I'll be back...
Email Post
Labels: foot humor mothers snooty salespeople summer

hokgardner said…
That's why I ordered my suit online, three different times. But that way I didn't have to try it on in a store.

And watch out for steroids. I have to take prednisone when my asthma acts up, and I don't sleep for days. I also get a lot done because I can't sit still for more than two minutes - and normal for me is five minutes.
July 13, 2007 at 5:27 PM

B. N. Sullivan said…
So about that miracle suit -- are we talking underwires and a tummy-tucker panel??

Anonymous said…
Well, I am crying after reading this post. I tried on one of those and looked like an overstuffed sausage. Cliche, yes, but for a reason!(It would have been nice if you would have let me continue to blame the suit.) I also discovered that it does nothing at all for thigh spread. So...if the Miracle Suit does a miracle on you, you are blessed, because you only needed a tiny one!
July 13, 2007 at 9:18 PM

Amanda said…
I found a MiracleSuit ages ago, on sale at our local Value City. It was Brilliant. Fit perfectly, had some sort of shirring or ruching or something gathering around my belly that made it look flatter, kept my breasts up, and yet didn't scoop in water when I swap laps. I only paid $30 or so for it, and wore it to the point of indecency.

Anonymous said…
Barb, I am so over the top with my weight issues that I've basically given up. I actually bought 2 of those "trapeze" smock like shirts that are so popular right now and look oh so cute on the tall thin young girls. On me, I'm sure people are saying "do you think she's pregnant??? - no, she's too old to be pregnant....maybe she's pregnant...should we ask?...what if she's just really fat?"

Lynn said…
Feeling the pain on both scores. Had to buy a new swimsuit to do the water rehab on the tibia that I broke from limping after pulling a calf muscle while line dancing at the old-folks singles' dance at church. Bought mine at Lands End on close-out. I'm thirteen years older than you, and the next suit I buy is going to *be* a little old lady suit, because I hope not to need another one until I'm a little old lady. Or at least an old lady.
July 15, 2007 at 8:19 PM

I never used to be flabby. Even when I was chubby, I was always toned. It's this damn foot --I actually WANT to exercise. (Well, you know what I mean. In a "please don't let my body continue to move after I've stopped" kind of way.) But I'm just trying really hard not to lose my whole mind over it because there is nothing I can do.

And we all know how good I am at knowing my own limitations, not to mention accepting reality, right?