On Being Southern and Other Identities

I have lived in Texas since I was ten. Thirty-two years. And 24 of those have been in Austin. It's the longest I've ever lived anywhere. I love Austin but my early years as an Army brat were formative, I think. In that, periodically, I have a strong desire to move. This happens most often when the temperature is in the high nineties (or higher) or during election years when I actually contemplate moving to another country. However, my good husband refuses to live any further north and I refuse to live any further south so we seem to be stuck at this latitude.

The really funny thing is that whenever I meet new people, they think I'm from the Midwest --the one area of the country in which I HAVEN'T lived. Maybe it's because I try to really enunciate since I have this voice like a Smurf on speed and I'm afraid if I don't enunciate, no one will understand me. (You think I'm joking but people routinely call my house and when I answer, ask me if my mommy is home. I know I shouldn't but I usually tell them to call her in Dallas and see. Click.)

I started thinking about this whole thing of regions and their identities because I don't really have a geographical identity, I don't think. I'm not Southern (my pie crusts suck) and I'm not Western (only went skeet shooting once and never hit anything. Plus I've never branded anything except a corporation). I'm not Eastern (although I'd like to live up that way about half the year --good knitting. But I don't walk near fast enough.) and I'm not Californian (no surfing, no manicures, no tan--ever. I do like California wine, though.)

I guess I don't know what I am.

I guess this doesn't surprise anyone.

But yesterday, I did something that many Southern women do every year. I have to admit that I have NEVER been so nervous. I don't mean to alarm you, but I, um, HOVERED. I called my father-in-law, who is an exceptional Southern cook.

Ladies and gentleman (my husband, I'm not sure any other males read my blog), I present to you the pictorial of my adventures into Southern Womanhood.

I made Tomato Relish.

Here is the scene being set. 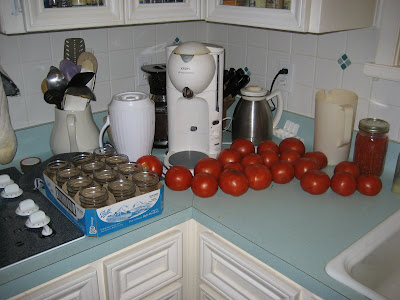 I used the recipe from the Bible of Southern Cooking (also a present from my FIL): 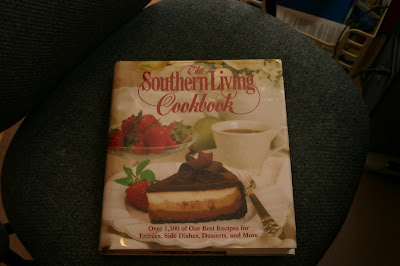 I won't detail the entire laborious process but I did want to note here that I had to PEEL the tomatoes before I cooked them. Nine pounds. If you blanch them in boiling water for a minute or so, you can take the peels off super-easily (another tip from my FIL.)

Anyway, here's what it looked like while it was cooking: 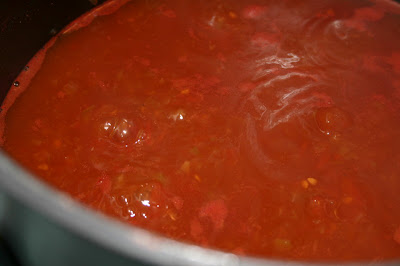 Here's the part where I got really nervous that maybe not enough liquid had evaporated and I took this picture to send to my FIL. 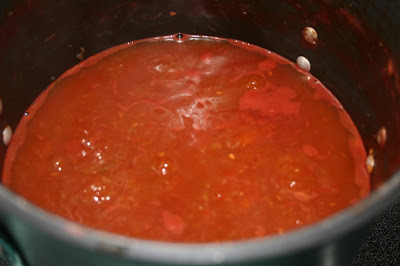 But he was playing golf and couldn't receive photos at that time. So I just bottled the stuff. And then I put it in the ten minute water bath--very important in the process. 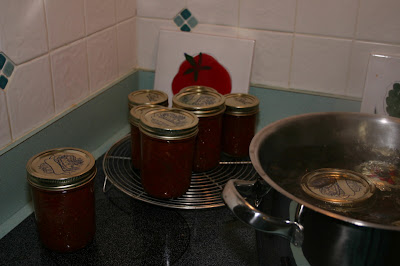 And then, after I got those incredibly satisfying PINGS that happen when your jars vacuum seal properly, I put them in our narrow and hilarious pantry. 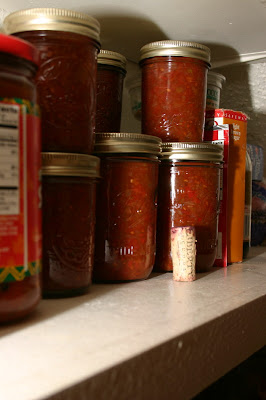 A good day's work--and it freaking takes about that long.

PS: My husband did a taste test and declared it perfect. I thought maybe I cooked it too long and that it needed more vinegar. We won't know until we eat it with black-eyed peas and cornbread.
Email Post
Labels: Homegrown Tomatoes humor summer Why I Totally Could Rule The World

Anonymous said…
I need to tell you that I just finished my first sock--inspired by the socks you posted pictures of in June. Yours are gorgeous! Anyway, I immediately cast on stitches for the second sock (per the yarn harlot's instructions in order to make it more likely that there will be a second sock) and am on my way to a PAIR of socks. Thanks for the inspiration-I've canned in the past-I think I'll stick with socks...
July 14, 2007 at 4:24 PM

Anonymous said…
Yes, I went through all that with my first try at making strawberry jam. I grew up with a canning maven and yes that ping of the seal is a wonderful sound!!!!!

DK said…
Oh, my god....I don't even know what tomato relish is, Barb! Dear heavens, I've been here in the south a month and already I'm a failure as a Southern woman...quick, someone say "Bless her heart," because that makes everything okay, right?

Barb Matijevich said…
You know, DK and Rockstories--y'all hail from the same part of the country, I think.

Anyway, the way we eat tomato relish is to crumble a slice of cornbread, ladle black-eyed peas over the top of it and put tomato relish on top. It's very delicious, in that Southern Comfort Food kind of way.
July 18, 2007 at 2:51 PM

Barb Matijevich said…
I wish I could have written to you, you anonymous posters, to tell you how much I loved both of these comments. I loved that someone who used to work with my sister still reads MY work!

and it means a great deal to me to have turned someone else on to the pleasures of sock knitting. Especially right now, when I've had something of a sock catastrophe and have been sulking. THANK YOU!
July 18, 2007 at 2:54 PM