What was that point again?

It's been quite a day. Not because anything unusual happened, really. I think it's just the pace of today was pretty relentless. I was going to list out everything that happened but it's nothing so compelling. Except that I am trying to be a better mom, while still getting Stuff done so not only did Jane have a little friend over for six-plus hours but we actually baked chocolate chip cookies and they got to lick the beaters and the bowl. (Every time I bake cookies, I think about the first time I offered then-five-year-old Ana the opportunity to lick the beaters and she looked at me like the simpleton I obviously am. "Uh, doesn't that have RAW EGG in it?" I remember thinking, "You're going to let the threat of salmonella poisoning interfere with eating something yummy? Whose child are you REALLY?")

One thing that happened today was that I got to meet my friend Donna for coffee. During the school-year Donna and I managed to get together at least once a month for coffee, at least right up until I had my foot surgery in March. But I haven't seen her since so we talked at breakneck speed for over an hour and then decided we had to see each other again next week. Oh, also, I offered to buy her incredibly cute shoes from her if she decides to get rid of them. They are uncomfortable but soooo cute. Of course, right now all I could do would be to sit and gaze at them adoringly but I think that the fact that I offered to buy them from her is a very good sign of my confidence that some day, as God is my witness, I will wear cute shoes again. (Everyone should go a little Scarlet O'Hara from time to time. Especially over cute shoes.)

Anyway, one thing we talked about was my blog --THIS blog. Donna has been reading since I started it back up again in April and she told me she really likes it. I said, "I have no idea what I'm doing with it --it's not like my other writings, which you know, usually have a point to them and stuff."

Donna said, "But your blog has a point to it!" She was all cute and defending me to me but then neither one of us could really THINK of a point. Maybe THAT'S the point. Maybe it's a Seinfeld kind of point--you know, about nothing.

Maybe it doesn't need a point?

So, I started thinking about the blogs I've discovered since April and what I like about them. (These links should open in new windows due to this cool html code that Damsel and I discovered.) Note that this list doesn't include my personal friends, with the exception of Tiffany, because I don't have clearance to expose promote them in my blog and plus, I'm more talking about sort of professional bloggers, if there is such a thing, which is the level to which I aspire. (I think.)

Probably my all-time favorite blog right now is Woulda, Coulda, Shoulda. Written by a woman named Mir, this blog details her life as a freelance writer, divorced and recently remarried and relocated, mother-of-two. Her sense of humor makes me laugh out loud almost every single day. Some drunk person once told me that I am the new Erma Bombeck (lightening didn't strike her but to this day I don't stand so close, if you know what I mean) but Mir is the new Dave Barry. (Well, Dave Barry is still the OLD Dave Barry but Mir writes in just exactly the same sort of rapid-fire, theater of the absurd, non-profane vein. I love her.

Y'all already know about my obsession with the Yarn Harlot, who writes in a similar style to my own only about knitting and her life (and funnier and well, you know, better.) Most of her readers (Like way more than 10,000 of them!) are knitters but she's so genuine and so unfailingly honest about her own foibles that even non-knitters love her.

Then I read a friend of Mir's named Chris, who blogs at Notes From the Trenches. What I enjoy about Chris is not only her sense of humor, but the fact that she is the mother of, get this, SEVEN children and she still sees the wonder and silliness and those small moments that make us all say, "Awwww!" and hug our kids.

I read Crazy Aunt Purl --who is rip-roaringly funny in that salty Southern kind of way (only she lives in California.) Having said how funny she is, if you click on her post from today, take a BOX of tissues and a bucket to cry in. I had tears rolling down my face.

I read all three personal blogs of my good friend, writing mentor, the Editor of my book and one of the smartest women I have ever known: Tiffany. (She'll probably correct my punctuation there since as we all know, punctuation to me is some sort of magical art form for which I possess no gift.) My favorite of her blogs is Rock Stories. She actually has a fourth blog called Dog Stories, but since I get to contribute to that one, I don't really think of it as a typical Tiffany blog.

Then I have several blogs I like but I categorize as The Profane Bloggers. People who use the F word with abandon but who make me laugh. I don't read them EVERY day, though, and I won't link to them here because I know that someone will get totally offended and because that's not the point.

I do HAVE a point. Really.

My point is that the thing the blogs I love the most have in common are as follows:
1. They are funny.
2. They are not profane, or edgy, or hip and trendy.
3. They are written by real women and are about small things that are huge--love, laughter, stitches of all sorts, parenting and pet-parenting, finding humor in the smallest moments and the largest losses.
3. They are not about any one thing and yet, they are about everything. They are about life.

So, while I'm still not sure what I'm doing with this blogging thing that I love so much, I sort of have a better insight into what kind of blogger I want to be when I grow up. I want to write about everything and nothing.

I want to write about life.

Toward that end, I just received a note written by my six-year-old. This is what it said: 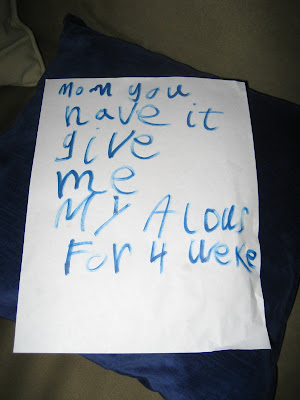 So, the thing is that I wasn't aware that Jane GOT an allowance, much less that I was in arrears. You know what this is, don't you? This is a trademark of the child we call the CEO --it's the Presumptive Close. Jane is the master of that.

And while I was getting ready to take a picture of that note, I noticed Edward, asleep on the couch, sprawled out like a drunk Frat boy after a party with his mouth open. His is a darn good life. (This one's for Roy. Rest in Peace, furry friend. Your mama is a good woman.) 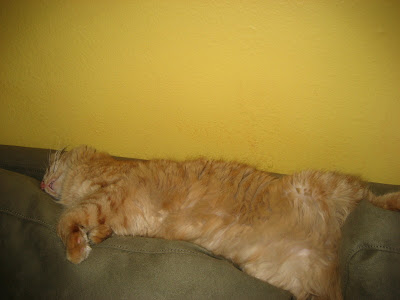 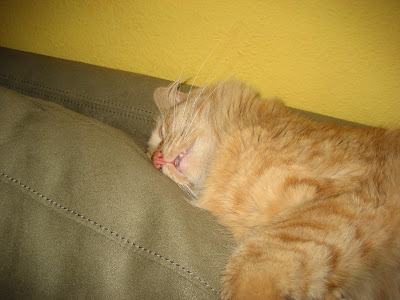 hokgardner said…
I've been having similar "Why am I blogging and what is my point" angst lately. I also learned that I shouldn't blog while hopped up on coffee and sudafed. Bleah.

Oh, and you sound just like my mom about shoes. She is a Shoe Person but is limited to Birks and Danskos because of massive foot problems.
July 11, 2007 at 10:00 PM

Stefanie said…
Barb, I told you that your blog had a point a while ago too. You always manage to get something across in your blog, whether that be (real) frustration or joy in something. I think that a blog is almost like a diary for everyone to see; someone's thoughts about something that they feel is important to them and believe is worth sharing with people.

Anonymous said…
Oh my. The story of Roy definitely warrants tissues. It's been a while since I've been over to that site. Thanks for the links!
July 11, 2007 at 10:57 PM

Damsel said…
You so discovered that little trick on your own!! You just shared it with me... and I was almost as proud of you for figuring it out as you were!!!

Those pics of the cat make me literally laugh out loud... "drunken frat boy"... ROFL!

Suna Kendall said…
One other reason some of us regular ole women blog is that we feel a NEED to write. And if you are a writer, the more you write the better you get. I do technical writing all day, and being able to tell stories on myself, share my thoughts (deep or shallow) with friends and read my friends' own thoughts, too, helps me feel connected with my fellow humans. And it reminds me there ARE other people like me out there (there are not many in the neighborhood where I live). So, I hope all your readers keep blogging, and you do, too!
July 12, 2007 at 9:47 AM

Annabanana said…
So have yo been to THIS???:

And here is one for you (you have permission to laugh out loud) - I will be running a booth at the Second Life virtual BlogHer conference which coincides with the real-life one this month. Or rather, my second life avatar will be there! That's another whole realm of mind-boggle.

Keep on doing what you do, it makes what I do (my life) more fun and maybe a teeny bit more meaningful.

Brendy Vaughn said…
Someone just told me about this blog: http://hoytabare.typepad.com/my_weblog/ It's a dad writting about parenting. I laughed so hard - I read every post he had.
July 12, 2007 at 7:42 PM