I had to go to the yarn store today. No, really, I HAD to! Because I ran out of yarn in the middle of my husband's second sock. I know, I know, you're thinking I made this up. You are so skeptical! Here: 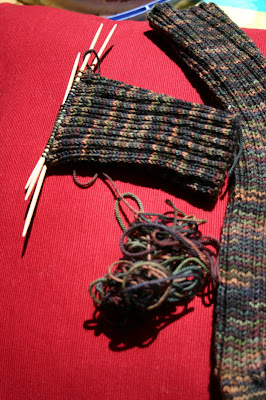 You can sort of see the finished sock and then you can see how far I got on the second sock before it became apparent that I was going to run out of yarn.

This did not please me, as the first skein of yarn had cost, ready? this much. 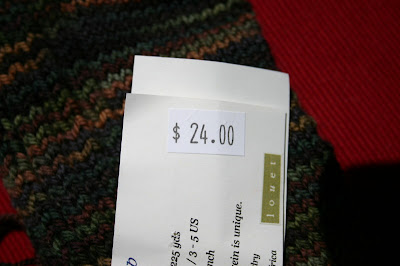 Now, I realize that my husband is reading this (he is out of town) and just did the math and figured out that he will soon have a $50 pair of socks. But honestly? It's cheaper than if I remodelled the upstairs bathroom, honey. Plus, look how gorgeous the first sock is: 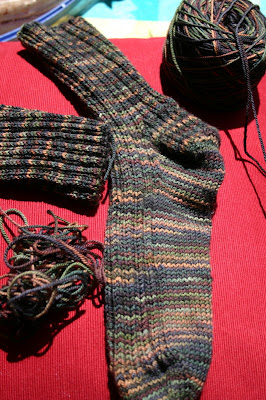 But ANYWAY, this post is not a sock post--I know that will come as a shock. But I had to go to the yarn store and TA DA, it wasn't raining for the first time this YEAR in Austin and people were really out and about. I saw a man walking down the street and something in his face really captivated me. I felt like I could see into his character--you know how sometimes you can feel like you know something about someone just by looking at his or her face? Because part of living a life is the character we develop in our physical appearance which conveys a bit of the internal character we develop over time.

I probably wouldn't have noticed this man but I had spent the weekend staring at the still characterless faces of my young (20) niece and my even younger cousin (17). My cousin was visiting from Germany (from where my parents had just returned after almost three months) and my niece was visiting from Midland. I know what you're thinking --worlds apart, you say? A girl from West Texas and a boy from Europe? Two ends of the spectrum, you say?

Apparently, the teeneage/young adult experience is pretty much the same all over.

At first I thought that maybe it's because both of them are only children that they have such egocentric world views, but honestly? I think it's really the age. And as much as I hate to say it, a lot of what builds character in our faces and our souls are painful experiences that we survive and that teach us about the workings of this ole world.

The thing is that I love these two young people and I don't WANT them to go through those "character-building" experiences yet. It's just that they are in THAT stage, you know? The world revolves around them and they know more than everyone about everything (I always respond so well to that. Because, as we all know, I really do know everything about everything.) I started thinking about it because I took them out to lunch and they talked on about themselves and as we were sitting there and I was trying not to swallow my tongue, two more sets of young people came in --all of them on their phones and sprawling all over the tables and booths (what is it about manners being a dying art these days? If you are young and beautiful, are you just exempt from changing out of the clothes you slept in before appearing in a public place?)and I heard one girl call her parental unit and say, "Can you, like, transfer $20 into my account? Because, like, I need gas. Well, like I KNOW, but I have to have GAS." (The "Duh!" was implied.) And then I read my beloved baby-sitter's blog and she had one of those "damn I'm good" posts --and she IS good, but well, that's not the kind of post that an older person would ever write.

It occurred to me that this really is a developmental stage that we go through and it's an important one. Young adults have to talk about themselves and get reassurance about their own greatness A) because it's the only topic of which they actually know anything and B) it builds a core of self-esteem that is necessary as we try to remain intact when the world starts beating us down.

Still, the future looms large as I contemplate the fact that both of my girls will be going through that phase at the same time.
Email Post
Labels: deep thoughts family growing up humor knitting real world yarn

Anonymous said…
Hi - I'm a cross over reader from Woulda Shoulda and I'm a know-it-all. I guess I never recovered -- maybe it is the only child syndrome. I usually work with know-it-alls too, sometimes that is good, because I learn something. At other times, they WON'T LISTEN TO ME! Don't they know how wrong that is?
May your niece and nephew recover from this horrible trait, and thank you for the fine encouragement for those of us with a LOT of character in our faces.
July 29, 2007 at 7:51 PM

Stefanie said…
It's very true. We young adults don't know anything else in the world. We don't have children to take care of, we don't have careers to worry about, and we aren't quite ready to let life sweep us away into adulthood. It's not a bad thing to need reassurance and it's nice to get it from older people who are a little more worldly, and who we think know more than us.
July 29, 2007 at 8:09 PM

Barb Matijevich said…
Oh, Holly, gosh, I didn't mean that all only children were self-absorbed know-it-alls. It's just one of those traits they shared despite so much else being different. I'm pretty confident the world will beat that trait out of them --I just don't know if that's a good or a bad thing.

Lots of character over here, too.

Lynn said…
And the great thing about not-strangling the kids when they're 15 and insufferable, is that eventually they get to be 20-something, and they give you grandchildren, and for some reason I have yet to fathom, grandchildren really *are* practically perfect. [At least for now.]

Lots of character here, too, from a younger sister sufficiently younger to have been, essentially, an only child. And yes, life does beat it out of you, if you're lucky.
July 29, 2007 at 10:23 PM

Anonymous said…
I like your sock and I like the story about young adults. As a teacher I sometimes wonder, but o.k... they are there for learning, so... I do think it doesn't make learning things easier if you think you can do already everything. :-)
July 30, 2007 at 5:03 AM

Anonymous said…
This makes my stomach hurt. Ben is just starting to go through this, probably a little late at age 16, but most days Mark and I basically want to squeeze his neck shut. I keep asking when is it going to be his mother's turn?
July 30, 2007 at 9:13 AM

Unknown said…
Oh my, I return to 7 classes of teenagers every day on the 27th. You have to love them, but the seniors in particular have all the answers to everything. Sometimes the only thing that saves me is my DSIL's comment that teenagers remind her of baby chickens--the ones just past that cute ball of fluff stage who still have some fluff and a few feathers and are beginning to get long necks and legs. I try to visualize that when I get really peeved.
August 1, 2007 at 3:46 AM

Barb Matijevich said…
I wrote a column one time about the Kitten Theory of Childrearing. I think the same principle applies to your seniors --once they get past the cute stage, you have so much else invested in them, you have to let them live.