The Journey Toward Texas 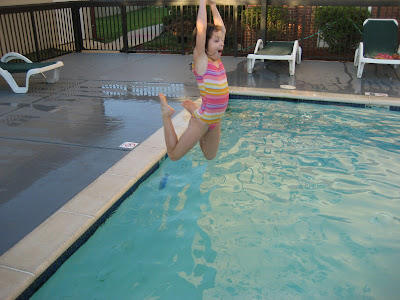 I just did something I haven't done since I had an infant to breastfeed on demand.

I got out of the shower after only shaving one of my legs. I mean, on purpose.

We're staying in Shreveport, LA tonight on our way back to Austin. There was a mix-up with the hotel at which we had our reservations and they didn't have any more connecting rooms. Oh, because letting our girls stay in their own hotel room without us is even an option before they are in their thirties.

So, we all got to see that muscle in my husband's face pop out in that really alarming way that he saves for when people have truly PISSED HIM OFF. He is not one who enjoys failure of execution when it results in him having to load his tired and crabby wife, not to mention his children, back into the car to find another place. He sat down in the Failed Hotel's lobby, did a search on hotels in the city, called a few of them and found one a few minutes away with connecting rooms and a pool and there we went.

Unfortunately, he neglected to ask about the water pressure and so when I got in the shower and discovered, after I'd put the soap in my hair that it would take me a year to rinse it clean, I was a bit surprised but I thought I could deal. Three months into the rinsing, I decided I might as well start shaving my legs.

Whoops, sorry, I lost my freaking mind before I got to leg two. Out. Of. Patience. "I'm sorry, this is your patience speaking: I suggest you switch to an alternative power supply because your patience level is freakishly, critically low. You were pretty good all through dinner in that hot restaurant when that woman told you it would take at least an extra ten minutes if they had to THAW the chicken breast out before cooking it. You were very patient while your husband was reading the instruction manual to his incredibly cool tiny camera, even though he kept taking pictures of you that looked like THIS: 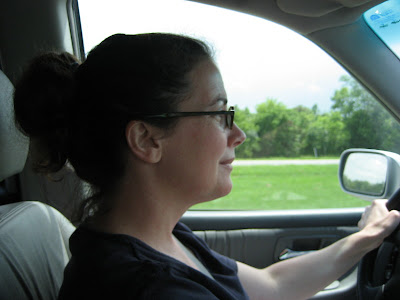 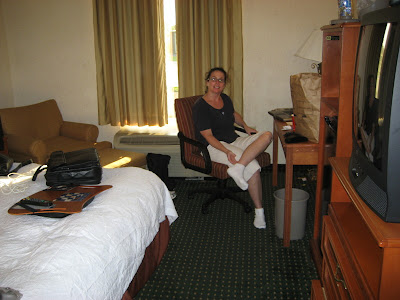 Although you did note the irony of finally appearing in a few of the seven million pictures that have been taken over the past week and even though you showered and wore make-up on a majority of those days, today was not one of them. Sigh.

But there in the shower, with the water doing something much like a Chinese Water Torture, you bottomed out of patience. This coincided with your first day of sobriety in ten days --so maybe that explains it. But at any rate, your new supply will be delivered tomorrow morning. Have a good night and try not to let the fact that your room has a distinct urine smell throw you for a loop."

Luckily, we have that second (and connecting!) room in which I can shower tomorrow and maybe throw caution to the wind and actually shave my legs AND my underarms. And luckily, our evil spawn redeemed themselves by being good travelers AND swimmers! 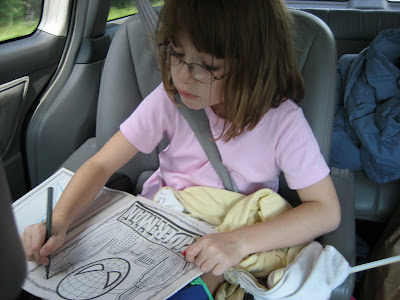 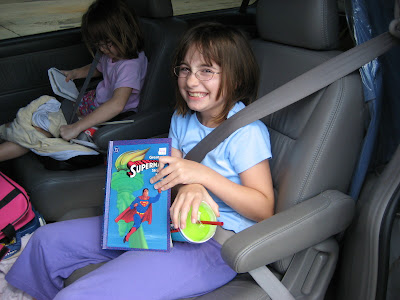 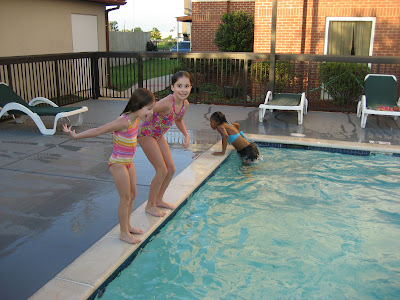 Lynn said…
Loved that first picture with your youngun caught mid-air. Is that not the essence of summer? So glad I found your blog the other day.
July 9, 2007 at 12:06 AM

Suna Kendall said…
Just checking your blog after reading your sock knitting post, and was amused to see that you also stopped in the same town we did on your way home. Thank goodness I only had one child with me (and he's 14, so he weaned at least 11 years ago) so we didn't have issues. But I am with you on the post-holiday let-down. Going back to instructionally designing was not a highlight of my life. Missing those SAHM days with the kids!
July 10, 2007 at 9:58 AM