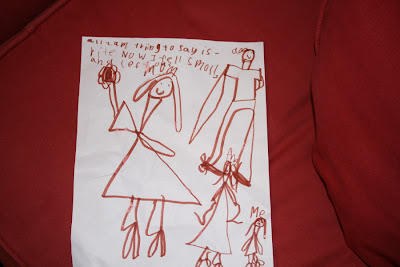 Here's the letter from Jane I was telling you about yesterday. It says, "All I am triing to say is-- rite now I fell smoll and left out"

Just because she frequently sends me notes saying that she never hears from me and wonders how the girls are doing.

Nope. Not bitter. Not me. 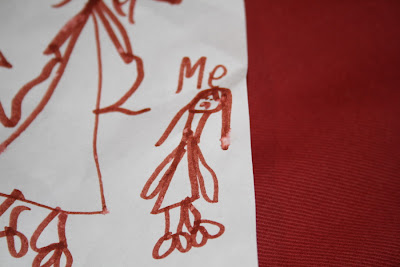 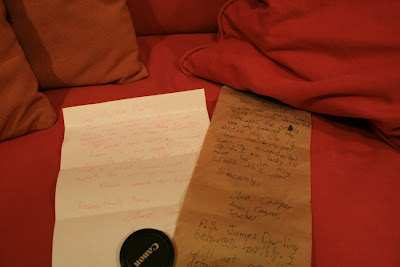 My kids played school a lot while we were at my mom's. One day, they told me that I was part of their game. My last name was Darling and my daughter's name was Lea (played by Jane) and I also had a son named James. I said, "Who is playing James?"

So then the teacher, who was named Ana Cooper for the purposes of this game, and who happened to be PLAYED by Ana Cooper, sent me several missives.

This is the first (verbatim):

Your daughters behavior has been exceptionally wonderful! She was the only one who behaved the entire day. She is now teacher's pet. Lea is a wonderful child. I am lucky to have her in my class this year.

PS: James Darling behaves horribly. I will not go into details.

A short while later, I received the following note:

James has been a terror all day! He threw rocks at Lea and myself. He is very rude. In class, when we say the Pledge of Aligence (I could never spell that!) He burped it!

Lea is an angel. She is very shy around other students and I think James might be a part. He scares her all day.

Please speak to both. 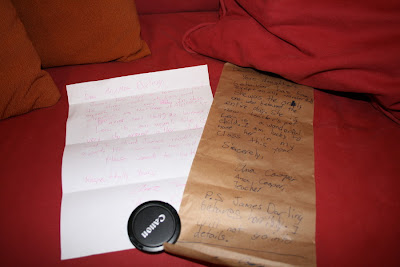 DK said…
That cracks me up. I will not going into details, he he!

We need to teach Ana the word "abhorantly". As in, he behaves positively abhorantly, I will not go into details. It would fit right into the persona. And make me chuckle even harder. Plus it'll be good for her SATs.
November 25, 2007 at 3:45 PM

Barb Matijevich said…
Isn't she funny? At one point, she was asking me for something and I said, "No." and she said, "Need I remind you that..."

Suburban Correspondent said…
I never told you what the Yarn Harlot said about her mom. She said she won a Canadian award for Best Humor Book the year her Meditations for Women Who Knit came out - Best Humor Book, not just among knitting books, among all the books published that year. So she brought the book and the award over to her mother, and explained what it was all about, and her mother's eyes welled up with tears and she said, "Oh, Stephanie - just like a real book!"
November 25, 2007 at 4:23 PM

MadMad said…
Oh, my god, too funny! I love that picture. Also, your mom not wanting to wade through the sock stuff. Welcome home! Can't wait to hear how the decluttering is going!
November 25, 2007 at 6:12 PM

Lynn said…
I'll be happy to sign a note to your mother that there's been precious little sock stuff going on here lately.

I could even get it notarized, once I get to work tomorrow.

Which gives us the third part of your new signature: "intermittent sock knitter".
November 25, 2007 at 7:47 PM

Barb Matijevich said…
Dude! I never sent out to have a KNITTING BLOG. It just happened because I'm a knitter. And a writer and I write about my life and well, that meant writing about knitting.

And I HAVE been knitting a sock. It's just been a freaking nightmare. It was supposed to be done for my dad's birthday. Today I frogged back the heel flap, just so you know. It's horrible. I hate it. I will finish it anyway because, although I am not a knitting blogger always, I seem to always be a KNITTER.

Me. Here. Right now. said…
My mom won't read my blog because of the lesbian thing. I tell her updates on the kids are there and photos and she just can't cope. I like to insert the word lesbian three or four times each time we speak on the phone.

I love the note from your daughter. So expressive and artistic to boot. Not many kids can hone down their feelings so well at such a young age. I should send my teenage sons to her for training.
November 26, 2007 at 1:25 PM