We got a lot done today, though.

The day began before dawn when I opened the front door to see my two cats hunkered down on my box of yarn. Is that hilarious or what? 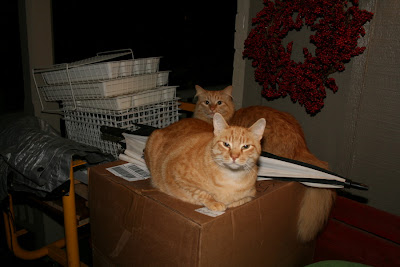 The movers came at around 9:00 --a four man crew to pack and load us. Naturally it was pouring rain. (As I post this, the movers have just left for the day and the sun JUST CAME OUT. I'd say that God has a sense of humor but honestly, this just smacks of the Devil messing with us.) 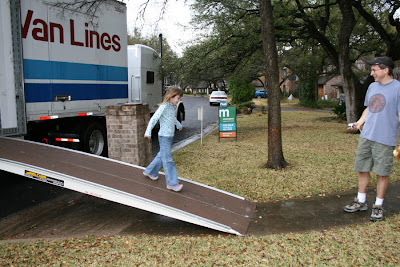 Ana had to go get her chickenpox booster shot at 9:15 so we left right away and then she came with me to get a shot in my foot at the podiatrist's office. (I'm having a series of shots that's going to obliterate the nerve in my foot that just will not stop hurting no matter what else we try. So, by golly, we'll show that sucker who's boss!) By the time we got home at 10:30, the movers had packed up her room so she didn't get to pick out a special stuffed animal for the trip to her grandparents. She, who has been such a trooper about all of this and who has expressed excitement and the desire to be in New York, finally melted down and said, "I don't want to move!"

And then my folks packed up the kids and they left for Dallas. I won't see my girls for an entire week. I think it was the right decision to get them out of all of this mayhem --the poor things were really starting to come off the rails as the house was being dismantled around them. But, gosh, I was unprepared for how much I am missing them. I think my instinct in times of stress is to gather my little ducks around me, you know? Plus, tomorrow is Ana's birthday and even though we've had two parties and I'm fairly certain that my parents are going to spoil the heck out of her using just that excuse, it seems wrong not to be with her.

I keep reminding myself that if there had been a different way to do this, we would have chosen that. Oh, that's not exactly right--there were other ways of doing this but this seemed like the best option for us.

So then, we just worked our rear-ends off all day long. At one point my craft room looked like this: 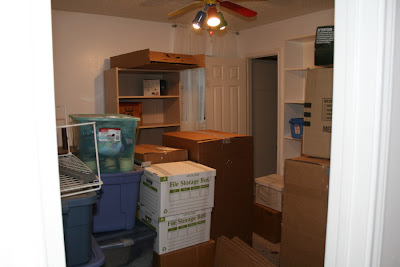 By the end of the day, it looked like THIS: 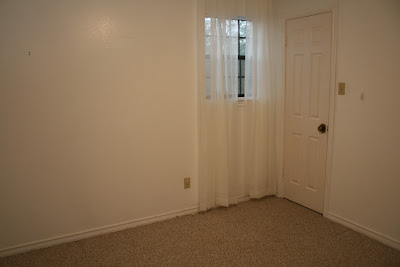 Among the funnier things that happened today is that the movers packed all of my clothes. I mean, they packed them before I could pack the clothes I would need from now until the time when the moving van gets to our house in New York and I greet them at the door in an over-sized pair of men's swim trunks and an old bra. Is that a problem? Because that's what I wore into the hot tub tonight to try to soak some of the kinks out of this old back.

I'll post tomorrow if I can before the movers pack this computer and the WIFI and all of that. If I can't, I'll post as soon as we're in our new house in New York on Thursday. Because after spending the day traveling with four pets, my camera, some coffee filters and the diamond I got for Christmas, I'm pretty sure I'll have something to say.

PS: The movie quote in my last post was from She's Having A Baby. Because all of my pop-cultural references are from movies from the 80's. It's not like I've seen any movies SINCE then. ("Grouper. It's grouper.")
Email Post
Labels: foot heartbreak humor? kids parenting the Glamah of it All The Great Cooper Move

Anonymous said…
GOOD LUCK!!!!!!!!!!! I hope you and all your stuff gets to New York without anything broken or bruised or lost. I've moved house a few times in the last decade or so but always within the same town. I can't imagine what it would be like to move to, say, Perth! You're a braver woman that I am. That said, I'm still pushing for PJ to get a job in Europe one day.

I thought about you all day yesterday. I'm fairly certain I will think about you all day today as well and possibly all day tomorrow and Thursday....and all day Thursday I'll be worrying about Sydney....so, you don't need to, because I've got it covered!

Good luck. I'll be praying for you guys (which you know is something I rarely ever say). I'm sure it'll go just fine. Oh, and don't worry about Ana - I had a similar meltdown when the movers came to the house I grew up in and we were only moving about a mile away....
March 11, 2008 at 6:49 AM

Lynn said…
I wish my living room looked as good as your craft room did in the "before" picture. One more move, and then I'm done until I buy a house of my own. I hope.

Suburban Correspondent said…
Oh, there is definitely a better way. Get rid of absolutely everything and buy all new in New York (there's an IKEA there and everything).

Anonymous said…
Oh sweetie. I love how you make jokes when your feeling stressed or sad or.....whatever. So much like this Canadian girl. If I was there, I wouldn't say anything - I'd just give you a huge hug and start hauling out boxes.

You know that we, as moms, always over-think stuff, right. Ana probably won't even realize that you're not together on her actual day...she'll be spoiled and she'll still be thinking about her wonderful puppy party...and you can make it up to her next year by coming to Toronto! LOL!

Anonymous said…
Oh my goodness! I just found your blog a few days ago and now I'm so surprised at your HUGE move! We have done the same things a few times and so I can completely relate. I wish you all the best in your move, from the sound of your writing, you're handling everything very well. :-D
March 11, 2008 at 1:00 PM

Sarah, Grand-Dutchess of Serendipity said…
Warm fuzzies from one mother to another. And As my Mother has said to me many times, "this too shall pass."

Lynn said…
Hey the cats aren't dumb! They figure if they stick with the yarn, they'll be sure to stick with you!!
I SO feel for you, I've done the move from NY to FL with 4 cats in a Honda civic while the DH drove his pickup towing a UHaul behind him. NOT fun.
Breathe deeply, it will all be over soon......
and you'll have your girls back again who wont be any worse for the wear because they can play in snow!!!
March 11, 2008 at 2:18 PM

TheOneTrueSue said…
I can't look. The packing, the moving - I'm having early flashbacks. Or flash forwards rather.