Welcome to New York, Day One

So far, it's been amazingly great.

Last Thursday, Coop and I got up at 3:30 in the morning and loaded the pets, in their respective crate/carriers into our rented mini-van and headed to the airport. First we had to drop off the dogs at this cargo check-in, and honestly, the anxiety we were feeling about our old dog Sydney (15) flying for the first time was just almost immobilizing. As in, I almost called the whole thing off. Whoops, made ya look, changed my mind, do-over!

We had honestly done everything we possibly could have done to make sure she survived. We had the vet out (how I will miss our good Dr. Wyatt!) to check out all the pets and she made us feel better about the whole thing. Syd is in just incredible shape for a dog who had a stroke last year. She's almost made a full come-back from that. I said to Dr. Wyatt, "We know that every day with Sydney now is a gift. I was sure she wouldn't see the end of the year last year and here we are in MARCH and she's still going strong. But I don't want her to die in transit, alone and terrified, so tell me if you think we ought to find some other way. I am willing to drive her."

Dr. Wyatt was her usual reassuring self and said in her professional opinion, although Syd has a definite heart-murmur, she didn't think it was anything more sinister than old, old age and that she thought she'd make it just fine.

So, we left her in the hands of the animal handlers and honestly, they seemed like most animal people seem: there for the love of their four-legged friends. Coop tried to slip the guy a substantial tip and the guy just laughed and said kindly, "Everyone tries that but we're going to treat her well no matter what and your money won't get her better treatment or worse treatment." I don't know --for some reason I felt better after that. Especially after the guy said, "Y'all try to calm down a little."

So then we checked in with our funny luggage (more about that when I tell you about our final day in Austin. I'm kind of out of order here but I'm writing a column about saying goodbye to Austin and I'll post a link here when it's done.) and the two cats. Coop had upgraded us to first class because he was worried that we'd have two cats in a row with some stranger and in First Class, there are only two seats across. I was all excited because I have only flown First Class once and DUDES, I embrace the concept.

But then, right before take off, some overly-officious and more than a little bombastic woman came to us and told us of some arcane FAA rule regarding pets and 737s and how it was impossible to have two pets in First Class. She kept saying, "It's right here in black and white!" like that made the rule make sense to us. The muscle in Coop's jaw started jumping around, at which point, had I been that woman, I would have turned around and run right away. But he stayed very calm and said things like, "We have had this planned for months so you can imagine my frustration." Later, he told me that what kept going through his head was that if he got belligerent (like the Continental woman--seriously, she needs some sort of anger-management training or something), she would put him off the plane and then her problems would all be solved. So my husband, the Ruler of Move Pre-Planning, got bumped to Coach with Thomas and I got a new seat-mate who was plenty happy to have been upgraded, you betcha. Less happy to get up to accommodate my trips to the bathroom but whatEVER. (After the second time I got up, I said, "Well, there now, you have twenty whole minutes before you have to do that again." He didn't even crack a smile.)

I was so tired and just plain old cranky at the whole turn of events and that woman--gosh, it's just amazing how a little power in the wrong hands can make someone simply unbearable--that I didn't do any sort of sentimental good-bye to Austin as we took off. Well, it was also still dark so I couldn't see anything but you would have thought I would have raised a glass of juice to the city I'd lived in for 25 years, wouldn't you? Nope.

Maybe it's for the best.

We landed some three-and-a-half hours and a new planet later.

We flew to Newark, New Jersey, because that was the only non-stop flight we could find that would carry animals and get us anywhere close.

***A small bit of background: Once, when our young cow-dog Scout was a puppy, my husband came home in the evening and decided to play with Scout. He came stomping down the hall, arms raised over his head and the universal, "I'm gonna get you!" stance to where Scout was lying.

Scout saw my beloved spouse and was so scared that...

...feces shot out of his bottom and hit the wall.

You can just imagine my delight.***

When we went to pick up the animals after their inaugural airplane adventure, it was no big surprise that Scout was outside of the cargo area, having, um, "soiled himself" as the attendant euphemistically put it.

Much eye-rolling on my part but I didn't have time to focus on that right then because my Sydney, my lovely, wonderful, OLD Sydney, was just fine. Happy, even. Greeted me with wagging bustle and small yips and all. I was so relieved that all of my blood drained out of my body and pooled in my ankles and then shot back up and all around and I got a new lease on life.

It wasn't until we loaded Scout into the rental van that we realized that there was no freaking way we could drive across Manhattan and onto Long Island with that stench. I was already getting a cold but DUDES, this was worse than any poopy diaper I ever saw.

So we pulled over into a gas station in what looked like a truly lovely part of town, bought some paper towels and then my husband, who apparently will never stop paying for having brought Scout home, cleaned out Scout's crate while I held Scout's leash and kept watch on the van. (I don't know what I would have done if anyone had tried to rob us... dropped the leash and pointed Scout's hind end in their general direction?)

But it worked because we were able to set off and an hour and a half later, we pulled up to our new house and our life in New York officially began. 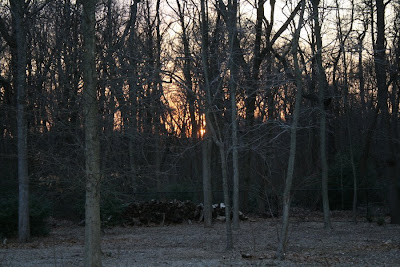 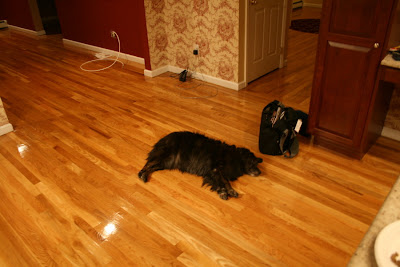 First fire in the fireplace: 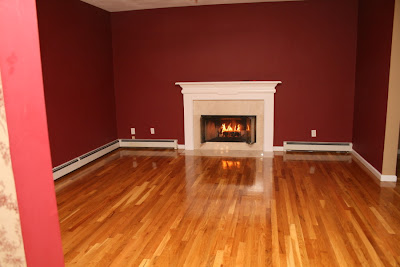 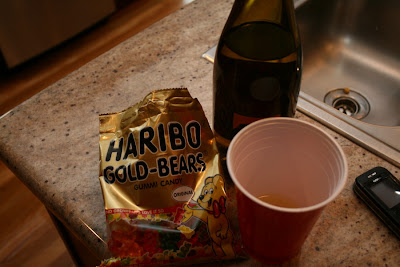 Suburban Correspondent said…
Isn't it fun camping out in a new house? Especially with a fireplace!
March 16, 2008 at 9:15 AM

Hug and distribute belly rubs (as appropriate) to all those involved, for me, would you? So glad you guys made it safely, and I'm SO glad Syd is okay. The place looks so nice. I'm so excited for you guys! AND you're East Coasters now! Gotta love that!!
March 16, 2008 at 10:13 AM

Ei said…
I'm sorry I still can't breathe. The whole image of Scout being an automtic poop weapon defending you against muggers...tears...no air...

Anonymous said…
Yaaayyy!!! You made it! Well done, all of you.

TheOneTrueSue said…
Oh my gosh, the feces. I spit upon myself. With laughter, I mean. I didn't just - spit on myself, because that would be gross. Oh - never mind.

LaDonna said…
Darnit! I have GOT to remember not to drink coffee when I'm reading your blog! One of these days, I'm truly going to short out my laptop! The image of poor Coop and your canine poop weapon...AHHHHH, you're killing me!

Congrats on making it to the new house! That fireplace looks heavenly and I HEART those hard wood floors!
March 18, 2008 at 1:13 PM

MadMad said…
Awww... that was such a great post! Like being there (though thankfully I wasn't, what with all the poop and frankly, the need to strangle the stewardess... 'cuz I woulda. You guys are way too nice.)Happy new home! It looks awesome.
March 18, 2008 at 6:54 PM