You Guys Getting All This?

I've been writing to you all in my head all day. Maybe that's the next frontier: Mental Blogging! No, wait, that doesn't sound so different from what I do...ahem, hush. What about "Thoughtful Blogging." Um, no. Blogging ESP?

Anyway, there's so much to do and so little time before the movers get here on Sunday to unload so I haven't taken time to write all about our big adventure yet. Hang in there, it's coming. No, I promise.

I also have a terrible cold but it seems like the wrong time to be taking a sick day. I spent today making a two-hour trip to Walmart--(MadMad, I thought of you) and painting the garage of our new house as a present for my husband. I know, I know... some people just give flowers. But Coop never asks for much and he mentioned twice that he thought we should paint the garage before the movers fill it to the gills with boxes. So I did it. It looks really nice--I probably never would have noticed one way or the other but it really does look better.

(As an aside, these types of presents are not exactly unheard of in our relationship. Once, when we were dating, I installed a pallet of grass at his house while he was out of town. It seemed the right thing to do.)

The problem with being sick in the midst of all of this madness is that I'm so tired. Last night, after the Noah's Ark odyssey where Coop and I flew the four pets out of Austin and into our new home on Long Island, I fell asleep at about 7:00 EST. Which is SIX o'clock Austin time. No, I really did. Look, Coop took a picture: 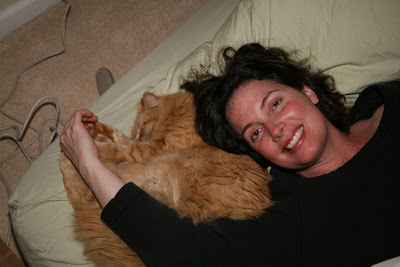 (Pretty cute pillow, huh? Although, Edward the Kitty is having a rougher time than one would have thought, considering his normal unflappable demeanor. He's been following me around like a puppy. But don't say anything because I think he'd be embarrassed.)

And the hard thing about falling asleep so early is that I woke up and was doing my normal middle of the night Insomnia Ramble and I came downstairs for water and it was 9:36 on the clock.

Anyway, I'll be back with pictures and stories of the move --probably later this evening when I wake up at 8:38...
Email Post
Labels: Coop Enough With The Whining Already humor? insomnia painters The Great Cooper Move

Anonymous said…
Each couple has their own gift-giving ... um... uniqueness. My very favorite gift from Knight is when he FOLDS LAUNDRY. I'm telling you, it makes my heart drop into my stomach to walk in and see him doing it. *fans face* He's just SO HOT. :P
March 14, 2008 at 10:25 PM

Anonymous said…
I hope you feel better. And the kitty pillow is SO CUTE!!

Suburban Correspondent said…
I believe the phrase you are searching for is "telekinetic blogging."

Unknown said…
I'm so glad you are taking the time to wave and let us know you are ok. I've been worrying about you.

So sorry Edward is feeling flapped. And you too. And dangit you are not in my time zone anymore so I'll probably never get to talk to you now, because it looks like you made it well past 8:38
March 15, 2008 at 12:08 AM

CelloBella said…
I like watching my man vacuum... and he makes the bed so much better than I do (now that I've taught him hospital corners)...

You look pretty good for someone so exhausted!