So, my beloved little Edward has been back with the family since April 29th.

It's hard to imagine it's been that long, actually. Three and a half weeks now. People have been asking how he's doing and how he's settling back in and I've been a little hesitant to answer because he's a different kitty than the kitty who left. I haven't been able to define it really...

It's not just that he's so skinny --he has put on some weight but he's still not back to being boneless. You can feel every single bone in his body. 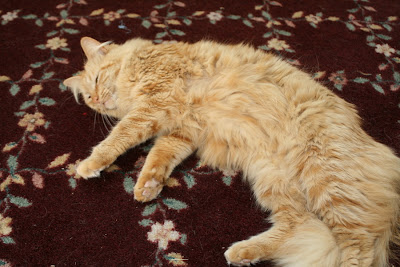 It's also not just that the pads of his feet seem to be scarred for good: 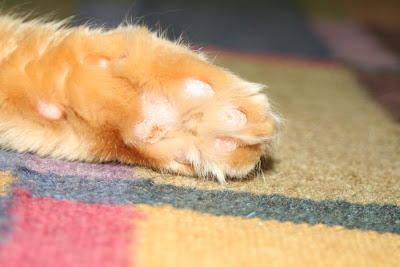 Which, you know, causes me some grief because oh, how I love those feet.

It's not just that he and Thomas, our other orange cat, are only just now getting along after their six weeks apart. Thomas has been a VERY UPSET cat over this new interloper-- honestly, he acts like he's never seen Edward before. (We've taken to calling Thomas and our cow dog Scout the "Brain Trust"of the Cooper family. But just today, Ana (still home sick) caught them grooming each other. 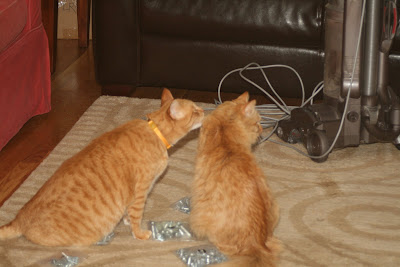 (I may have accidentally uploaded the big version of this photo so when you click on it, it might be HUGE.)

But what I think it is is that he's just lost his arrogance. Dudes, he was the funniest, most arrogant cat before. His entire motto seemed to be, "Hey, I MEANT to do that. Now, you there, stop gawking and admire the tail."

The tail is intact. 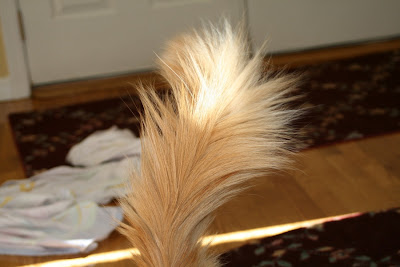 But Edward? He's just sort of a paler version of himself. A little more tentative and clingy than he was before the Great Adventure. Do you think little orange cats can suffer from Post Traumatic Stress Disorder?

And we haven't let him go back outside yet. (I thought I'd try something new and actually take my husband's advice for once.) He's ready, though. He paws at the screen to go out and he sits there, yearning to be free. I know the day is coming when I'll need to let him go and trust that he'll come home again. I made a deal with my cats when I brought them home that I wouldn't keep them confined. They've always been indoor/outdoor cats and I promised them they always would be.

It's just not so easy, after everything that's happened, to let him go with grace and to trust that he'll come back to me. Maybe I have a little bit of PTSD, too? So, I'm giving him until the Edward Socks are finished to be kept inside. I'll finish them on June 1 --that seems fair.

Meanwhile, though, and I'm SURE this is no coincidence at ALL, I cast on the first of my Contest Socks. I'm still working on the Edward pair--they are my traveling socks that I take with me to work on whenever I have to wait somewhere. And today I sent off the books to the first five winners --but if you won a book from me, you have to send me your address if you really want me to send you one. Send it to my e-mail address which is barb AT sothethingis.com. I promise to promptly lose it but hopefully, I'll mail the book before I do. I'm not really some lecherous carpet salesman from Amarillo masquerading as a neurotic mother/knitter/writer from New York. I mean, Dudes, you can trust me because who could make this stuff up?
Email Post
Labels: Edward family Happily Ever After what makes a life

Unknown said…
She really is trustworthy she's sent stuff to me. And if you think I'm her posting under another name, check my blog. My writing sucks, hers doesn't.

I'm sorry that Edward is still showing the distress of his journey. But you know that is what life does. It marks us, it makes us richer and deeper, and a little sadder. Obviously it works that way for cats too.
May 23, 2008 at 7:10 PM

Mrs.Q said…
I do think that the orange beasties can have some form of feline PTSD. We used to have a big ol' black cat who was Bagheera's soul mate. Since Puck died, over a year and a half ago, Bagheera's become cuddly and needy. He's not his old, aloof, totally neurotic self. But we've got to know his new (neurotic in other ways!) self - and he's absolutely a love. He's not so much a different cat as showing a different side of his personality. I'll quit blathering, as ei said it much more succinctly and accurately.

Miri said…
Oh, orange cats are the best. We have a grey three-legged tabby and a grey long-haired weirdo and neither one of them is as awesome as the oh-so-orange Iggy we still mourn. We could do a small study on why orange is better. But it's awesome that your cat is home and healing.
May 23, 2008 at 11:29 PM

The Amazing Trips said…
Thank goodness for the technology to bring your cat back home to you!!

Several years ago, one of our (high strung) tabbies was lost and I was DEVASTATED. When he found his way home - a week later - he was a totally different cat. Much more easy going than he ever had been before. I think one or two of his nine lives flashed before his eyes during that week away and he knew what a good deal he had camped out on our couch in the sunlight...
May 24, 2008 at 12:18 AM

I wonder if perhaps as he gains weight his paleness will get better too. He had a pretty traumatic six weeks' time of it; kitty PTSD is not suprising, really. When people have PTSD, it takes a long time to even begin to feel safe again.

We have four cats; all are indoor ones. Once, when one of our most beloved cats got run over, I swore from then on all our cats would only be indoor cats. So it's really all they've ever known. You're braver than I am. I would be too scared to let Edward out, but I totally understand your point.

Anonymous said…
Barb, we've had both our cats inside now since the autumn and they are just so much nicer. The older one, Heidi, was a totally outdoor, mouse killin', bird killin', flea infested (but still beautiful) hunter. The other one, Patchy, was a bit more timid and would roam on the deck but has never killed anything in her life (except for that one time we had a mouse in our HOUSE - I am forever in her debt for that one). Anyways, if you want, you can certainly re-train him to stay in. I thought it would be a horrible experience to get Heidi to stay in but it hasn't been bad at all. Now, every night at about 10:30, she starts looking at me in that "is it time for bed yet" way. She hops up on the bed with me and snuggles all night. Patchy prefers her own bed which I bought when I decided to keep them inside. Anyways, they are much healthier and cleaner and I believe, no less happy at being indoor cats.
May 24, 2008 at 11:40 AM

LaDonna said…
Well, I feel like I'm repeating what everyone else is saying to some extent but...

We are an accumulation of our experiences. Edward just had a big adventure/ordeal that has inevitably altered who he is. It doesn't mean he loves you or the rest of his family any less, he's just a bit of an altered version of himself.

I admire that you're working your way into letting go again. It will take all of your courage to open that door and let him into the world again. But when you're both ready, you'll be able to do it!
May 24, 2008 at 12:05 PM

Barbara said…
I so understand what you are going through with Edward. If it's any comfort two of our previous cats who had been lost in similar circumstances did stay closer to home once they returned.
I'm having such a hard time just now with letting our ginger kitty go but I know it's for the best. He so loves being outside and exploring. I wish I could actually talk myself into keeping him in but I can't.
May 24, 2008 at 3:18 PM

Bullwinkle said…
I can't help but think that my mom always used to say it takes a month for their internal radar to aclimate to the new location.

April 29th to June 1st is about right, according to my mom. I think she knows things about the animals. I'd go with that.

On the flip side, when I moved, my cat, Dudley, had to become an indoor cat - he was 10 at the time and adjusted just fine. Of course, he had never been a true outdoor cat - he only went outside with his dog buddies. (I had two samoyed who had raised the little guy.)

I'm sure Edward can have some form of PTSD. I'm also sure that with love and snuggles and good food, he'll overcome it.

Hang in there, Mom also used to say that it took at least 3 weeks for the little guys to settle in and show their personality.
May 24, 2008 at 4:34 PM

knittergran said…
You are really brave-letting Edward out would make me so nervous! Perhaps you could let him out the first time when some or all of you are outside? Can you tell I'm timid???
Also, animals must be able to have PTSD. I've heard of pets, even birds, being on Prozac...Seems extreme, though.
May 25, 2008 at 10:42 AM

Georgi said…
I do think cats can suffer from PTSD, especially when they are lost for so long. I had an orange cat who we found in a dump and he was the best cat, but he did get lost for a couple of weeks during one of our many moves and when we finally got him back he was different for a long time. After a while though, either we adapted to the new Tigger or he changed back to his most lovable self.
May 27, 2008 at 9:03 AM