The Face in the Window Revealed! 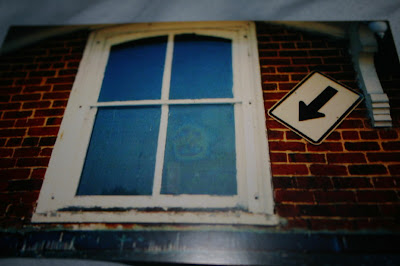 Okay, so, I am about to show you something that my husband has spent his whole life wanting to see. Something his FATHER, who has lived in Reform for most of his 65 years, had never seen until today. 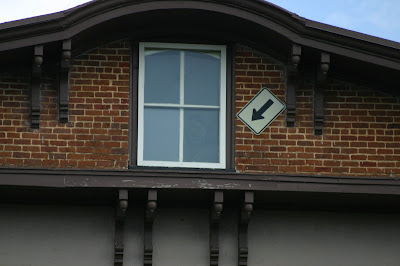 THAT, my friends, is a picture of the Face in the Window.

THIS, my friends, is a So The Thing Is Blog Exclusive, if you will. (Perhaps my first exclusive ever --how 'bout all the money my parents spent on my expensive Journalism Degree?)

I'm hoping it will allow me to slip this right past everyone without having to explain that I had a little accident in Columbus, Mississippi today, too. 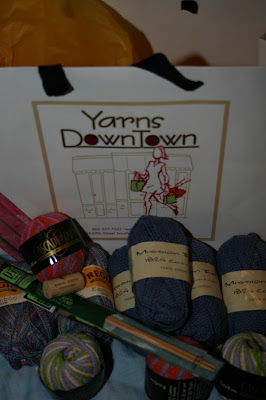 Pay no attention to that because you don't want to miss the POINT of this blog post. Which is... um...oops, sorry, I got lost in the Regia Bamboo there for a minute.

The POINT of this blog is that we got to go up into the attic of the Pickens County Courthouse. You know, the story, right? Here it is on the official plaque outside of the courthouse: 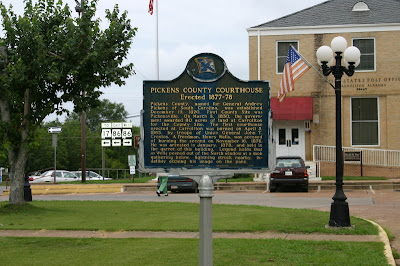 You can read the story by clicking here. And that should take your mind off of how I got lost with my child on the back roads of Alabama WITHOUT MY PHONE and not knowing my FIL's phone number (since it's programmed in my phone) and somehow, through Divine Intervention, managed NOT to turn around and back track (which I hate--seriously, it's like a sickness. I refuse to go backwards the same way some men refuse to ask directions.) and ended up exactly back at the Pickens County Courthouse. Coincidence?? Or was it really the ghost of Henry Wells pulling us to the infamous site? (Note that Henry Wells was lynched weeks before the windows were installed in the courthouse. Details, details. Suddenly his face APPEARED in the window--the fact that he was clearly guilty shouldn't affect the spookiness of that. Of course, my daughter Jane said scornfully, "It looks like it was DRAWN on the window." Dude, work with me.)

Anyway, because my FIL knows people in high places, we were allowed into the Courthouse and then, we were allowed to go up into the attic. Unfortunately, I didn't make the trip up the very large ladder, some fifteen feet off the ground, 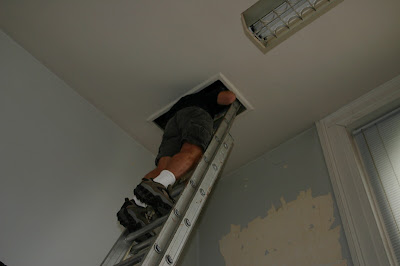 and into the attic. I am back in my walking cast and honestly, that's really the entire reason I didn't go up the incredibly long, large and unstable ladder. Only my husband and Jane were brave enough to do so, although my FIL got up to the top of the ladder and put his head and shoulders through that tiny hole.

Jane, of course,managed to go up like the little monkey she is, complete with her Queen for a Day Crown. Because everyone should do their ghostbusting wearing a tiara, doncha know. 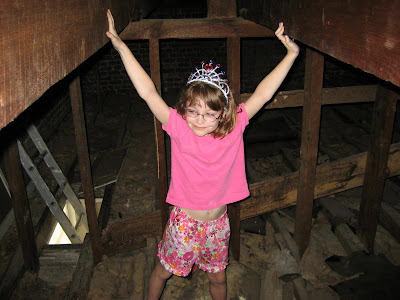 There are several really odd things about see in the attic behind the image of the face in the glass. Like the fact that from the inside, you can't see the image. 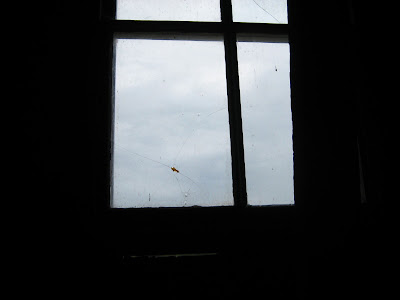 Well, that's not entirely true: you can see this perfectly clear glass that has a bunch of holes in it due to some pranksters trying to shoot it with B-Bs over the years. (And if you look carefully, you can see several holes made in the glass by people with really bad aim.)

So now I know that my trip to Alabama has not been in vain.

We hit the road to head back to Texas tomorrow. I guess I'm leaving Sam behind. 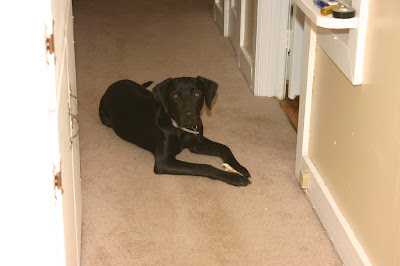 And, ps, love the tiara. An absolute must for ghostbusting, housecleaning, and state dinners.
July 7, 2007 at 8:25 PM

I picked up your blog from knitting, but I have truly enjoyed the story of your vacation and this sideline story of the ghost in the courthouse. Local folklore is a real interest of mine although I don't do anything with it anymore.
July 8, 2007 at 6:20 AM