I Got Yo Character Flaws, Sister.

So, MadMad, from the comments, (whose blog is hilarious) asked me yesterday --after my whole bagel debacle --why I couldn't just go BUY some bagels. Well, she said it more politely but that was the gist.

And I started thinking about it and came face to face with a big ole Character Flaw. Another one.

You guys know me. I'm not really the kind of personality that screams Confidence In All Things. (Like yesterday, I took one of my books to Ana's teacher. "I brought you a copy of my book, " I said. "Don't feel you have to read it or anything.") I think I might have started out as a confident soul --just given the way my little Jane is wired and the fact that she's so much like me in so many ways. But somewhere along the way, I sort of lost that. Granted, I had an odd childhood and a very different sort of mother than Jane has but I definitely became more tentative about things as I grew older.

Except in one thing: it never occurs to me that I can't do something.

I've had this trait my whole life.

It's stood me in good stead sometimes. I self-published my book, The Mermaid's Purse because it didn't occur to me that I really shouldn't do that. I started laying tile because I just couldn't believe that someone making $6 an hour could do something I couldn't (ah yes, but that person could probably do it without a nervous breakdown) and now I own my own wet saw. I didn't know anything about the music business and I managed a musician for a time. I started knitting socks just out of the blue and now I'm totally addicted to them. (Oddly enough, my confidence doesn't translate to sweaters. I am really afraid to try to knit a sweater.) I decided to try my hand at painting a Thomas the Tank Engine on Ana's wall when she was four, even though I had no artistic training, nor, um, ability. Now I am working on a painting of my girls. Here's its latest incarnation, which I am only posting because I do not accept that it totally stinks. 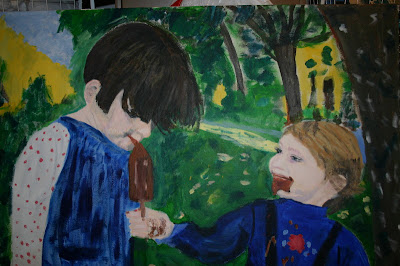 NOTE: It's NOT finished yet. I can make it better. I know I can. No, really, I've already set to work making Jane's head less flat and making Ana look less like Michael Jackson. Really.

I think there's something wrong with me.

Once I went on an entire odyssey to uncover the secret behind Great Harvest's Honey Whole Wheat. I baked about, oh, fifty loaves of bread, tweaking the recipe each time. I even went and bought flour that I had ground myself in the bulk department of Whole Foods. It still really irks me that I couldn't figure out that recipe.

I think maybe I have a problem accepting that I have some limitations. I think maybe that's why my failure with the Weed Eater grates on my very last nerve. It's not that I WANT to do all the Weed Eating... it's that I refuse to accept that I CAN'T DO IT.

There's this great scene in this documentary of Lance Armstrong's training for the 2001 Tour de France called the Road to Paris. I posted it to the blog --in a separate post, of course, because GOD FORBID I SHOULD BE ABLE TO DO THIS THE WAY I WANT TO --where his coach is trying to get him to stop riding up ahead because there are three meters of snow on the road. Lance looks over. "On the side?" he wants to know. The coach continues to tell him, "The guide says there is no way you can ride. No way." "Who says that?" demands Lance.

Anyway, MadMad, I COULD go buy bagels but only after I've proven that I can MAKE them. I hope you understand.

Because, um, I think that would make you the only one who does.
Email Post
Labels: blogs column cooking non-blog deep thoughts dysfunction gifts growing up love Love Thursday Maybe I Should Just Shut Up real world what makes a life Why I Totally Could Rule The World

I never figured out if that saying admonishes fools or admires them. I say admiration is the way to go. Mistakes are cool! It's the process, not the product! Keep having fun!

Oh, and your mother sounds fantastic! Look at all she dealt with, with your father's injury and all. That must have been heartbreaking for her. For 19 years - heartbreaking every day, thinking of what could have been....

And good luck with teenage girls - they can bring up all those old issues at a times 10 magnitude. Quite frankly, I could have done without reliving all the adolescent emotions my Anna has reintroduced me too. I need my sanity.
September 26, 2007 at 11:29 AM

Tiffany said…
Maybe you could turn that confidence to your benefit by just sort of ASSUMING that you'd be able to make bagels (or whatever) if you tried, and thus liberate yourself from the obligation to prove it. That way, you could save time and money by buying your bagels AND be able to say with confidence, "Well, I CAN make bagels, but I bought them this time because I have so much else going on."
September 26, 2007 at 11:41 AM

Kerry said…
I can totally relate. I also tiled the bathroom, although I never let myself buy the coveted wet saw.

I have been meaning to suggest that you stop buying those dreaded little packages of yeast; for less than one strip you can buy a whole big bag that will last a year, but perhaps I should keep my bright ideas to myself!

Barb Matijevich said…
I guess I didn't explain myself very well because I don't actually feel the need to prove anything. I jsut want to be able to do it. And when i CAN'T do soemthing, it makes me crazy and results in large amounts of baked goods for my family.
September 26, 2007 at 12:18 PM

Barb Matijevich said…
Wait, I mean, I don't feel the need to prove anything TO ANYONE ELSE. Just to myself. Does taht make more sense? No? Then no bagel for YOU!
September 26, 2007 at 12:21 PM

Anonymous said…
The secret behind any of Great Harvest breads is that they over-proof them so that wild yeasts get in and the texture is bad and IT ISN'T GOOD BREAD!

Barb Matijevich said…
So you don't think it tastes really good? Because my kids and I have been known to eat half a loaf in one sitting...

Ei said…
Is it entirely possible that one person's character flaw is another's personality gem? Because I admire you for this. You are taking what you want out of life. This is a good thing.

Unknown said…
I understand how you feel. But be aware that when you master The Bagel, there will be a mighty clamor for repeat performances. (Where I live, one can't just go out and buy a fresh bagel.)

Anonymous said…
Dude...you should post the photo that you are painting from. Then everyone would be able to see how awesome the painting is.

On a different note - I very often think about how I can teach my kids that they can do whatever they want. If they can imagine it, they can do it. I've always been the "somebody else will do it and do it better so why should I bother" type. Instead of being the type of person who thinks "man, it would be so cool to backpack across Europe" I want them to be the kind of people who think "I'm gonna backpack across Europe and I'm gonna leave next week!" KWIM?
September 26, 2007 at 5:02 PM

MadMad said…
Oh, I wrote in - did you delete me or did I enter the security thing wrong? See, I just can't do anything right... ah well. Where were we? Ah, yes, bagels. I think I was saying that, like you, I don't let the idea that I don't know what I'm doing stop me (when in my case, at least, I probably should!), it's just that I didn't realize people liked bagels enough to go to all that work. (I said it funnier the first time, I promise!)
September 26, 2007 at 5:06 PM

Bullwinkle said…
Oh I so totally get this. (FTR, I can change the oil in the car, I just don't want to.) (Now, true croissants was a challenge ... And I can totally still do a cartwheel.) Just because I can, doesn't mean I want to. Life is about doing what you love. I love trying new stuff: I just may not love being a car mechanic full time.
September 26, 2007 at 5:15 PM

Mrs.Q said…
Oh blarg - Blogger's eating the comments! Anyway (I hope this doesn't post twice) - I've nominated you for a Rockin' Girl Blogger award. Coz you RAWK! But please stop recommending new blogs to read, because I'll never leave the computer! I even missed my bus today because of it.
September 26, 2007 at 8:51 PM

Barb Matijevich said…
I so cannot have Blogger eating my comments. I will go to wherever Blogger headquarters is a bash someone in the ear with a FOREIGN OBJECT.

Barb Matijevich said…
Oh, Mrs. Q? I am really sorry about the bus. I won't mention anymore blogs. Well, there's just one other one but I'll just quietly link to it.

Anonymous said…
I feel like if I ran into you in the grocery store I would know you.
I understand about the bagel thing I did it once may have to try again since now I want some!
We really loved great harvest bread - but I haven't had any in years are they still around?
Oh yeah - I wanted a tile backspash on the stove, went to HD to get all the bits and bobs. When we got home my husband said I'll help you later - when he came back I was done. I was always told "that there are a great many things a person can do if they put their mind to it" good advice I say
Keep on!
September 27, 2007 at 12:50 AM

Amanda said…
You could aleays sign up for NaNoSweMo http://www.knitgrrl.com/?p=378 , aka National Sweater Knitting Month. It's the same idea as NaNoWriMo, but 50,000 stitches in November, instead of words. I've signed up for it, got the yarn and the pattern from ages ago, and this is a good incentive.
September 27, 2007 at 6:23 PM