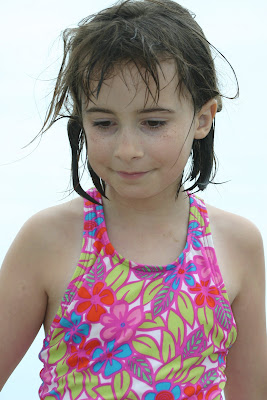 I get these daily quotes e-mailed to me from Real Simple Magazine. I'm not sure how I signed up for them --it was probably the product of some late night insomniac surfing when all my good sense seems to desert me. (That would also explain my rather disastrous membership in that DVD club.) But anyway, I get them every day.

Mostly they make me want to say, "Oh, shut the hell up!"

Because they're so saccharin and all soft-focus romance and smooshy, and I'm usually just sitting down to check my mail after cleaning up dog vomit or something. But every once in a while, one comes that stays with me. Like this one:

To myself I am only a child playing on the beach, while vast oceans of truth lie undiscovered before me.
— Isaac Newton

My friend Sarah was over the other day and she made an off-hand remark that stayed with me, too, and I've been wondering if there is an ocean of truth in it or not. The thing about Sarah is she doesn't usually speak unless she's got something to say and her offhand comments are rarely, um, offhand. She said, "It's funny how you two have favorites. I mean, Jane is all over your blog but Ana, not so much."

Well, that's true, in a way. For one thing, Jane is FUNNY and she's such a little pistol that she continually gets into these hilarious scrapes. She's such a natural comedienne and she is frequently silly just to make me laugh.

But Ana is... she's an entire ocean waiting to be discovered. I find that I am super careful when I write about Ana because I've gotten flamed in the past for talking about her intellectual gifts (and I'm not linking to that on purpose, Tiffany) and because her nature is so sweet and tender that I end up sounding like Real Simple quotes on the bad days. I've always said that the difference in my two kids can be described by their relationships to our old mean cat. At about 18 months, Ana emerged from her room after a run-in with Winnie, her eyes full of tears, saying, "Kitty mean! Kitty mean!" At about the same age, Jane said breezily, "Kitty hiding."

Take for example yesterday's drama with Sydney and the wasps. I told the girls about it as we walked home from the bus stop. I told them we needed to be super gentle with Syd. Jane went rushing into the house, flung herself on Sydney, gave her a big hug and went on about her business. Ana came slowly into the house, put her backpack up and sat on the floor with Sydney, stroking her gently. Today, when I went up to the school to give Jane her glasses that she'd forgotten, I saw Ana going to lunch. "How is Sydney?" she asked me, first thing.

There's always so much going on inside of Ana. She's such a thinker, you know. Right now there are all kinds of changes going on--both inside and out. She's in this phase of her life where her body is beginning to change and she's gotten sort of self conscious. Like she very carefully brushes her hair in the mornings now, even though I still can't get her to brush her teeth. Like she's very into her clothes right now but half the time I can't get her to put a shirt on. Like she asked me yesterday if I thought she should smile in her school pictures with her mouth closed so her nostrils don't flare? It's hard for me to answer her seriously, even though I know she's asking me in all seriousness, because, um, (this is such a goofy mom thing, I'm all embarrassed) I think she's so beautiful. Sometimes I just sit and watch the light play across her face.

This past weekend was her bridging ceremony where she flew up from being a Brownie to being a Junior Girl Scout. It was at least a gazillion degrees outside and we were all sweating profusely. All except Ana, whose Cuban roots keep her cool and calm always. 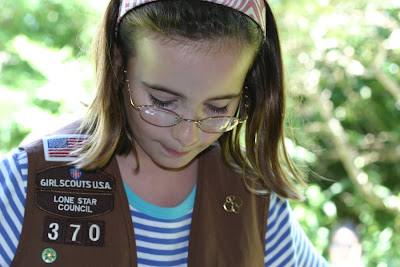 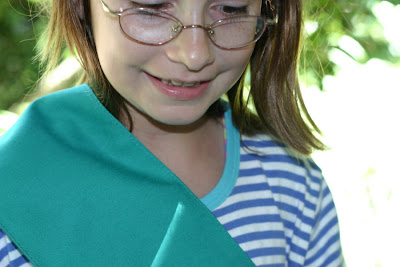 And really, you know, that's Ana. She is infinitely calm and thoughtful, like the ocean. The occasional squall, sure, and she can be an exacting little mistress to her little sister. But for the most part, she's calm and deep and beautiful.

So, if I don't write about her as much as I do Jane, don't be fooled. She is never far away from my thoughts. Or my heart. (Ack, was that just way too Real Simple or what?)

I'm taunting our squirrel and the weather gods today. Living a little dangerously, as it were. After Syd's recent misadventures, our area rug in the living room was in desperate need of cleaning. I waited until I was pretty sure it wasn't going to rain (everyone knock wood right now!) and I waited until I could hoist the thing outside (my aged back, you know) and then I shampooed it and sprayed it down with the hose. 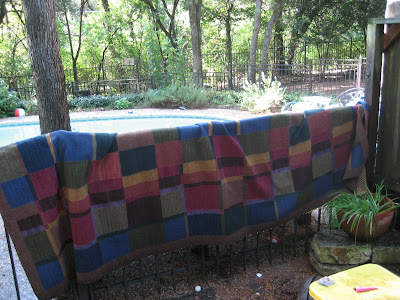 Ei said…
Do you go through phases? I think I go through phases where I talk constantly about one boy or the other. But honestly, my oldest is so sensitive and serious, I feel like I'm invading his space by talking about him even when he's not there. My youngest is gregarious and bouncy and joyously affectionate...I think I understand this all too well.
September 14, 2007 at 8:35 PM

Anonymous said…
Well, you know, I certainly would not flame you over a discussion of intellectual giftedness. When my dd was in 2nd grade, her teacher described her as "having a quiet strength that I admire very much." I get a sense of that same strength in Ana. Not to mention that she is beautiful. (We love Hanna A. at our house too!)
September 14, 2007 at 9:17 PM

piscesgrrl said…
I have sort of an odd but deep relationship with this woman who told me I think more than the average person (which was a cool thing to hear) and then she pointed out one day how much she liked my blog but found it curious that I hadn't even *mentioned* my husband, let alone blogged anything about him. Aye! She thought it rather telling. I'm still not sure what to make of it. :)