Today I made bagels.

This required me to spend $200 at the grocery store first, because I was out of yeast. So I made my trip to the grocery store and finding myself standing like a lost child in the produce department, I ordered a tall, quad latte --yes, four shots of espresso and teeny bit of room. So, naturally, when I ran into my friend Kathryn by the cucumbers, I talked non-stop for five minutes at breakneck speed. She was almost running to get away from me-- which was a smart choice since I can't run after her.

Off to a good start, eh?

Then I did my grocery shopping and when I got home, I couldn't find the yeast. Such is my abhorrence of the local grocery store that I had worked myself up into a RAGE over it, complete with looking up the telephone number so that I could make the manager drive the damn yeast to my house when, oops, I found it.

But I wore off all of my espresso. I am still so tired from the Girl Scout trip that I'm just not functioning very well. And frankly, the idea that I am tired after going CAMPING makes me want to cry. It's not like *I* was doing all of those activities--although I did walk a bit further than I have walked since January. But I slept pretty well, once I fell asleep. I'm just tired.

And that's what happens to old people.

Anyway, the thing about these bagels is that they are sort of an authentic shortcut because they use the rapid rise yeast, shown here: 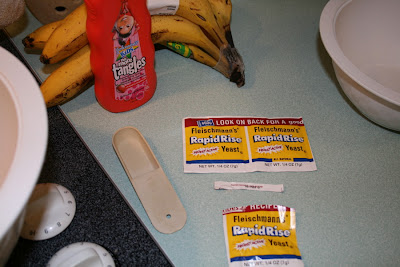 You add the yeast and a bit of sugar to some warm water, which looks like this: 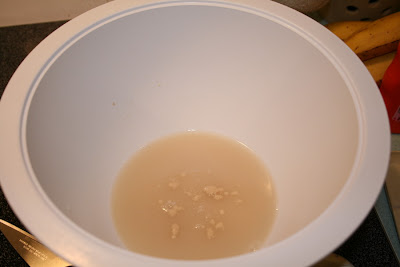 Then you add the flour and it looks like this: 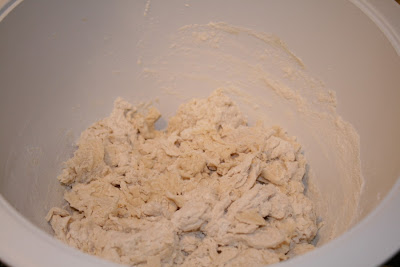 Then you turn it out onto a lightly floured counter and you KNEAD IT FOR TEN MINUTES.

Dudes, I had to turn the air-conditioning on. And I kept obsessively checking the time(I had pictures but they didn't turn out) until finally, FINALLY, I reached this: 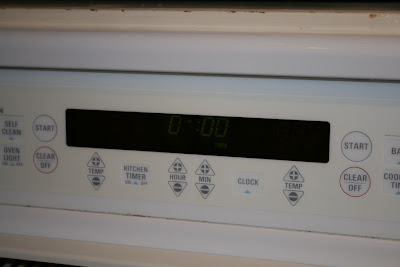 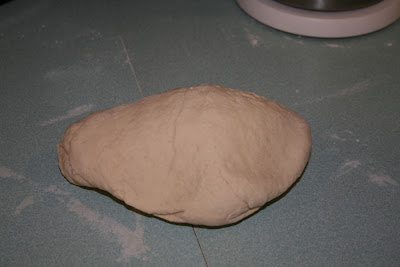 Then I put it in an oiled bowl: Covered it with plastic wrap: 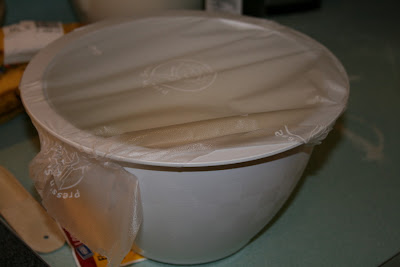 Set the timer for 40 minutes, during which the dough was supposed to double. 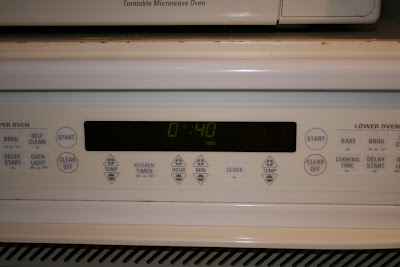 Which is good because, in addition to needing to REST (not that I'm bitter), it took a good bit of time to clean this off the counter: So, after the dough had doubled, I punched it down with what feeble strength I had left and then I formed it into a brick and cut it into eight pieces. 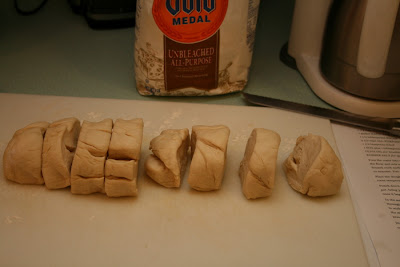 Only I misjudged so I had to knead half of it back into a loaf and cut it into four pieces. This had a bad effect on the bagels and the ones I had to reform didn't turn out in the lovely bagel shape for which I was hoping. 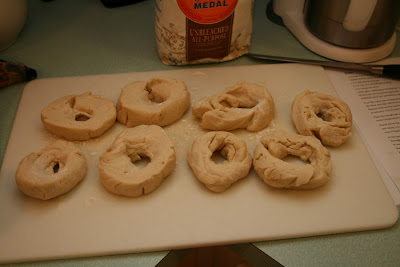 Then you push a well-floured thumb through the center of each piece and make the bagel's hole. Then you do the water bath thing, where you cook the bagels in boiling water for up to two minutes per side. 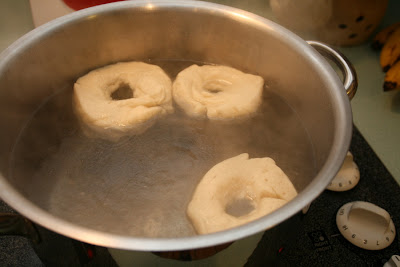 Don't skimp on the time, is all I can say, because THOSE bagels (the ones I shortchanged on the bath) 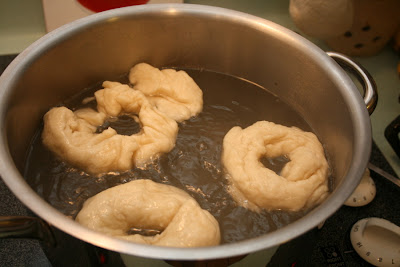 stuck to my baking sheet when next I baked them at 475 for ten minutes. (Before baking, I glazed them with a little egg white wash and sprinkled salt on them.) Mine were done baking in exactly ten minutes. 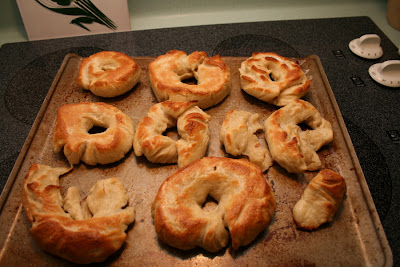 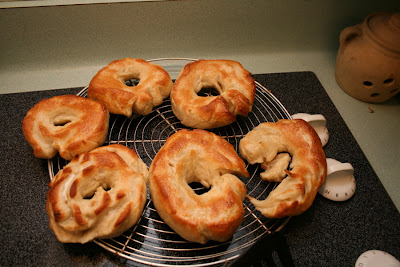 They're pretty good. They taste like plain bagels, more or less. They could use a little salt. But I'm old now and I probably should start watching my salt intake for my blood pressure anyway.

I probably shouldn't confess to you that at some point I dropped some bagel that had been in the water bath onto the floor and stepped on it. 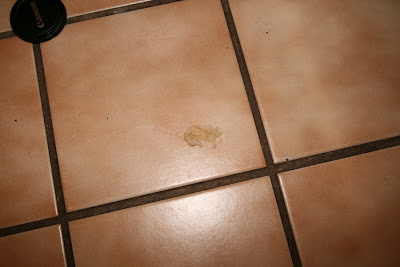 And I REALLY probably should tell you that after I took a picture of it, I forgot to wipe it up so I stepped on it AGAIN and then ended up having to clean both my shoes and also my entire kitchen floor. I think this is what they mean when they say making bagels is hard work.

Okay, I was going to post the recipe here but after eating an entire bagel (granted it was one of the under-bathed ones), I think they're pretty terrible. So, here's the link in case YOU want to try them. And if they really turn out to be terrible, feel free to write me all about it! Kidding--this chef's version look really good. It's probably just me.

Edited later in the afternoon: It may be just me but I've eaten two of them now and they are terrible. Really terrible. Don't waste your energy.

On the bright side, I just got a call from the Girl Scout Leader and one of the girls who went on our trip has head LICE.

The wine embargo is so totally over.
Email Post
Labels: blogs coffee cooking non-blog Grocery Store Hell humor Maybe I Should Just Shut Up My LIfe as a B Movie

hokgardner said…
I know what went wrong, you forgot to coat them with detangling spray.
September 24, 2007 at 2:47 PM

Barb Matijevich said…
Dang it. I was trying to move it to the bathroom after She Who Is So Tender-Headed That She Cries When I Brush Her Hair was done with it. And then it sort of snuck into that photo but I was thinking, "Well, none of the OTHER pictures have it in there. Woohoo for me."

Suburban Correspondent said…
Don't you hate it when you put that much effort into a cooking project and you're left with...well, with nothing much? I am never, ever making homemade pretzels ever again, I can assure you. Not only do I have to deal with my disappointment, but the kids are crying. And there is the entire kitchen to clean up, because everyone "helped" cook.
September 24, 2007 at 3:15 PM

Suna Kendall said…
Yeah, what ei said. Those were pretty pitiful bagels for all the effort they took. I think bagels need to be made by people with giant vats for boiling and such.

And I just about lost it with the lice. They were the icing on the cake. Or, the egg wash on the bagel. Or the te-tangling creme on your lice comb. Hmm, that didn't work out right.
September 24, 2007 at 5:08 PM

Anonymous said…
Oh no! I'm the author of the recipe you used, and it's always been foolproof for me. Feel free to drop me a line (email is at the bottom of my about page) if you want to give them another try and you'd like some guidance.

Barb Matijevich said…
Well, the hilarious thing is that my daughter, Ana, who is a VERY PICKY EATER --absolutely LOVES them. She's asked me to make them again and she's scarfing them all down as we speak.

I hope you weren't offended that I screwed up your recipe! I will definitely be trying them again.
September 24, 2007 at 6:02 PM

Barb Matijevich said…
Oh, MadMad, you just opened up a whole can of...um...blog post. Tune in tomorrow for what is possibly my biggest hubris. I hadn't even thought about it until now but it makes a lot of sense.