Off to Camp! Woohoo. No, really!

I am getting ready for my first Girl Scout camp out as an adult.

Do you want to know how I am doing that?

Well, by embracing denial and doing all other sorts of jobs that I have been neglecting.

So far, I've done four loads of laundry, loaded the dishwasher, taken out two giant sacks of crap out of Ana's room and my craft room, swept the porch, written instructions for the housekeeper and left a check, and written a reminder for my husband to give Sydney her medicine on Saturday. I still haven't made the bagels but I have the recipe sitting on my counter, does that count? I went to the store yesterday and bought some bagels so Jane did finally get her bagel with peanut butter on it for breakfast but I forgot to buy yeast and I just looked at the yeast in my refrigerator and it expired on November 3, 2006. Whoopsie. I didn't throw it away though, because I figure that about the time I start hunting for a flashlight, cleaning the refrigerator is going to sound like a mighty appealing job.

It's more that I really just don't want to go.

Right now, I mean. Any other time would be grand. Of course, this is also what I thought when I first agreed to go and be the co-chaperone. We planned this way back in... I don't know, March or something and I didn't anticipate that:

A) I would still not be fully mobile.

B) I would have walking pneumonia

C) It would still be this freaking hot. (Honestly, it's like I fall for the same trick every damn year. I never think it's still going to be in the high 90's in September. It's like I have some sort of heat amnesia or something. I forget how awful it's going to be. It's like childbirth, only I have it every single year.)

D) My husband would have been out of town all week.

I'll get excited about it as I go about my packing. I already dug out Ana's sleeping bag and asked a friend if I could borrow one for me. (The only other Girl Scout sleep-over thing that Ana and I have attended was when we spent the night in the Children's Museum. It was great (air-conditioned) fun right up until the moment we unrolled our sleeping bags and I discovered that the one I had borrowed from Jane was a child-sized version and came up about to my waist. And it was all there was between me and the gross Children's Museum carpet.)

Speaking of catching up on household chores(and we were, way back there a bit), I am trying to clean off my desk a but. One thing I still have sitting on my desk is THIS 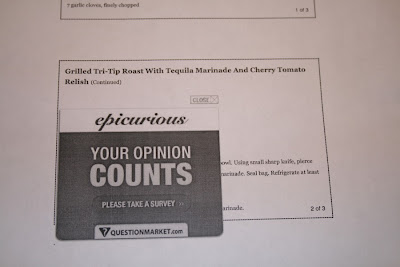 from that post the other day where I gave y'all the recipe for the crock pot roast thing? Take a good look at that. I'll wait here if you want to click on it to make it bigger so you can see what it is. (Thank you to AMANDA for teaching me how to make photos open in a new window! She totally rules. I feel all techy and stuff.)

Anyway, I was printing out the recipe because I make it so often that it's a pain to have to keep trotting into the back to look at my computer to get the amounts of the ingredients and I don't want to print it out every time because of the environmental impact of printing. (Quick, hug a tree!) so I thought I'd print it out and put it in my recipe box. When the little screen popped up inviting me to share my opinion, it never even occurred to me that it would PRINT along with the recipe! I mean, who has a pop-up appear on a print-ready page??

So, YO Epicurious! My opinion is that you need some WAY better programmers! Thanks for letting me share!

All right, all right, I'm going to go pack my stuff. The good news is that I should have lots of time to knit because it's not like I'll be going on the hikes with the girls. The only thing is that, it's hard to knit when you're sweating. Still, maybe there's a camp lodge! That's air-conditioned! And has a Starbucks!

Anonymous said…
So I shouldn't tell you about what I'll be doing tonight.....with my BRAND NEW MAGAZINES and my BRAND NEW, CRISP WHITE PILLOWS and my CLEAN UNDERWEAR SCENTED CANDLE....that I wrote all about today on my blog...

have fun in the woods BooBoo!

Suna Kendall said…
Good luck with that "lodge" and that "Starbucks in the Woods."

Of course, I am wishing school buses had REAL air conditioning and football stadiums served something you could actually eat.

Suburban Correspondent said…
You are a far better mother than I. I would withdraw my daughter from Girl Scouts before I would go on one of those camping trips. Actually, my daughter isn't in Girl Scouts. That's probably the reason.
September 21, 2007 at 4:21 PM

Anonymous said…
Ohhh, Barb. I feel for you. Especially as I have just returned from a 3-night camping trip with dd's 7th grade class. My advice? Bring your own coffee, and your own means of making it. It will save your sanity. Also, packing a spare roll of toilet paper and a container of hand sanitizer ain't a bad idea (as well as industrial strength ear plugs!) Best of luck to you!
September 21, 2007 at 9:21 PM

Tiffany said…
The first time my daughter experienced camping, she was three. She didn't sleep and our tent was near a lake, so that meant her father or I had to stay awake at all times, also. I'm allergic to cottonwood, and it was everywhere; I threw up at least five times during the night (walking roughly two blocks each time to use the dirty, dark restrooms with wet, slimy floors...) I overcame my lifelong fear of spiders in time to pluck one off of her shirt with my bare hand as it headed for her neck.

When she asked the next day when we could go camping again, I told her "When you're five." That sounded safe at the time--it was nearly two years in the future. But I lied. She's 11 now and we haven't been back.
September 22, 2007 at 9:36 PM