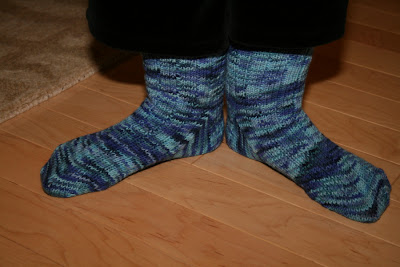 So, lots of news today.

I finished my mom's socks today. That's the giftee pictured above. (Doesn't she have nice turn-out?) And hey, I'm getting better on the timing thing. Her birthday was Tuesday and today is only Thursday. (Oh yeah, oh, yeah, I rule, I rue-ule.)

(These socks are knitted out of a new yarn for me called Hacho (color 306) --it's a hand-dyed wool spun in Peru. (As an aside, I find that I like yarns that NAME their colors better than these ones that just number them.) It's not my favorite yarn ever (there was a color pooling issue on the second sock that I'd rather not talk about) but it was nice to work with and more reasonably priced than the Claudia hand paint that calls my name... And guess what? Another first: I made the stitch pattern up. It's a knit three, purl one stitch. I think it's pretty.)

Our house sale fell through today. I knew I shouldn't have talked about it before the deal was inked. I'm bummed but mostly because, well, would it be so very wrong for me to have been right JUST ONCE? Coop has been saying all along that he didn't think the house would sell until we were moved out and the place looks empty and huge. Nevertheless, I did all that staging work and here we are, about to move out and with the house yet unsold and he's right, he's right, he's right.

I am also bummed about having to make two mortgage payments, with no sign of lottery winnings in sight.

But even in this week of lasts, I had two firsts. I was in the shower and I went to put the soap up on the soap dish thingy and it slipped off, hit the side of the tub and shot out into the bathroom. I was not appropriately caffeinated so I had to peek out from behind the curtain to ascertain that, indeed, the soap had made a break for it and was in the middle of the bathroom floor.

The other first I had today was that I knitted my first swatch. I know, I know, people are always talking swatches and gauge and all that but frankly, to knit a swatch would fly RIGHT in the face of my whole "if this doesn't work, THEN I'll read the instructions" mentality. But I am attempting something completely new, which is to make house shoes/clogs for my girls and to do that you have to do something called "felting."

Basically, you know how if you accidentally wash a wool sweater on warm/hot in the washing machine, it comes out looking like a doll's sweater? That's felting. I am VERY excited about this because I knew there would come a time when I got to put my vast experience with Shrinky Dinks to good use. (Same principle.) And get this: I got gauge! Wahoo! I took pictures but they are being held prisoner by my other computer and I can't get to it at this moment.

Today I did my last stint of volunteer duty up at the girls' school and they had their last Thursday. Thursday is "extra" day, which means they get ice cream after they eat lunch. I hope they have something similar to that at Jane's new school in New York or let me tell you, heads are going to ROLL.

And in another first, the boy Ana had such a wicked bad crush on announced his own crush on a pretty blond girl in Ana's class. Ana came home with her first heartbreak and there was nothing I could say or do that could make anything better. Not for the first or the last time, either.
Email Post
Labels: Ana humor? Jane Maybe I Should Just Shut Up parenting socks what makes a life

Mrs.Q said…
Mr.Q calls felting "dreadlocking" and was so taken with it the first time he saw it, that he wanted to "dreadlock" everything. Including the socks I had just finished for his Very Large Feet. Stinker.

Hope the next few days go well for you...I remember how bittersweet it was leaving the old hometown to move out here...so sending you lots of good vibes!
March 7, 2008 at 12:01 AM

Suburban Correspondent said…
You tell Ana to tell that boy that that's it, she's leaving!

Impressed with the socks, and the gauge swatch. I do swatches sometimes; but I don't really know why, because they do not seem to bear any real relationship to the garment I am attempting to knit.
March 7, 2008 at 8:14 AM

Anonymous said…
Great socks! I am a terrible knitter, I do things way to tightly. If I tried to knit socks, they'd be lucky to fit Barbie!

Unknown said…
See I KNOW it is because he is heartbroken about Ana moving away and he is emotionally distancing himself from her so it doesn't hurt so bad.

I've been reading too many women's magazines again, haven't I? DK has it right. Poor Ana, I'm pretty sure your mother has found one of the very few really wonderful ones, and in the process set the bar wonderfully high for you.

Hugs Barb. I'm going to have my last First Date After the Divorce this weekend. :) The world is going crazy. (I need some ice cream too Jane. I'll be headed to the WW frozen foods section after work)
March 7, 2008 at 9:44 AM

hokgardner said…
I have felted, and it is magic!

MadMad said…
Oh my gosh - our socks match! Yours are great! I'm so sorry about the house thing! What a big fat bummer. Also the crush thing. Poor Ana. Boys stink, tell her.

lae said…
I made slippers for my boys for Christmas and it was really easy. I used a pattern by Fiber Trends for felted clogs. It was my first attempt and felting. My only advice is when they are in the washing machine, check early and often. Felting is QUICK.

Anonymous said…
Haha that's the first thing I noticed was that whoever was wearing the socks has nice turn-out.
March 8, 2008 at 9:31 AM

TheOneTrueSue said…
I'm sorry about the house. So stressful... And poor, sweet Ana. I'm so not looking forward to seeing my kids suffer the kinds of hurts that I can't fix with a bandaid.
March 8, 2008 at 11:24 PM