You'll never believe it. Just now, we had a visitation from the bulldog. I know it's silly, but it did cross my mind that some disaster was about to befall us.

So far, though, the only bad thing was that I spoke with my mother and she managed to insult me in this very subtle, polite way. We were chatting and I mentioned that I was still blogging and had even put up some pictures of Sydney's new haircut on the blog and she said, "Well, good. That way if anyone CARES what Sydney's haircut looks like, now they'll be able to see." I said, "That's what a blog IS--it's a peek into our everyday lives. I presume the people who read my blog are interested and if they aren't, they won't read it."

Which got me thinking about blogs in general and why they are so fun to write but also to read. I visit just a few blogs regularly. The Yarn Harlot --about which I've written quite a bit. But WHY do I go there--what's so interesting about a Canadian vegetarian mother of three who is a maniacal knitter? Well, she's FUNNY, for one thing. And she's a really good writer, for another. And a fantastic knitter. I'm new to knitting but I think I would read her even if I didn't knit. Her style is somewhat like my own... well, except she can spell better and obviously, she doesn't write near as often as I do about having to rip out large amounts of errant knitting... I don't know-- why do we ever get interested in the things we are interested in? And if you're reading my blog and you find Sydney's reaction to her haircut funny and/or interesting, does that make me banal and boring for writing about it and you banal and boring for reading about it?

I mean, sure, it's not freakin' War and Peace. But how much of War and Peace can you take on a daily basis? How many people have actually ever READ War and Peace? (Besides my mother, I mean.) I like Hemingway as much as the next person --well, okay that's a big lie. I can appreciate Hemingway but I find him tedious. I once tried to write a short story in his style and I ended up with a manuscript that contained no adjectives. I LIVE for adjectives.

Anyway, maybe it's narcissistic and maybe it's banal but maybe, just maybe, anything that shows us how similar we are to one another and breaks down barriers between people is a worthy endeavor. And I feel pretty safe saying this because I know she's not reading this unworthy drivel, but Mom? Bite me.

For the rest of you, if you are interested, here's a photo of the Bamboo Walking Sock I'm currently knitting. 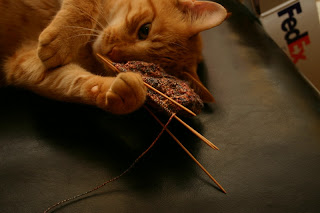 This is my first effort with patterns and it's knit on these itty bitty needles and so far, I've had to start over four times. But that's why handmade socks are such a deep expression of love. Because you kill yourself making them and then you give them to your loved one and that person promptly wears them outside with no shoes to get the mail and puts a hole in one of them. And so you start again.

Anonymous said…
Oh I so wanted to create a new blogger nickname to post a scathing come-back comment. I would have used "Your Mother" as my new name. LOL!!

When I first started blogging after our NYC trip, I wrote about the reason people blogged. It was a pretty good post (or at least I thought it was at the time). Damn, I wish I could find it.
April 29, 2007 at 2:09 PM