It Hit My Brain

My mother-in law is visiting and tonight when we sat down to dinner she told the girls (who were apparently starving since they were eating as if they'd been raised by wolves) that it takes twenty minutes for one's body to tell one's brain that the body is full. The girls paused for a moment and then continued shoveling food in. We had a small amount of mashed potatoes and the girls were competing to see who could eat the most and stiff the other one.

So, you know that I'm working on my second pair of socks, these for Ana, my nine-year-old daughter. Obviously, I am very new to sock knitting. The first pair, I knit for myself using sportwash and size 4.5 needles. The third sock I knit was just a trial thing--I didn't measure and I didn't know what I was doing and the sock ended up not fitting my oldest daughter but fit my youngest. She, of course, didn't LIKE it. I am going to frog it (rip it, rip it) at some point-- it's just sitting there reproaching me.

Right now, I am working on my first pair of socks with an actual pattern, using size 0 needles and this Regia Bamboo 1064 yarn, which is slippery and difficult to work with, and I've been doing a lot of cursing.

Except, right before dinner, I tried the socks on Ana.

It was one of those Knitter Defining Moments. I'm not sure I can describe it. It wasn't just that they looked so beautiful on her foot. It wasn't just that she liked them. It was more that something I KNIT WITH MY OWN TWO HANDS for someone I love, to warm and protect her feet, is turning out so well. I enjoyed putting that sock on her foot more than I enjoy wearing my own hand-knitted sock. If I had known what it was going to feel like to put socks that I have knit myself on the feet of my loved ones, I would have started many years ago (and their feet would have been so much smaller!)

Motherhood is a very strange gig but being a sock knitter may be even more unexpected. Who knew?

I was waxing lyrical, trying to explain the feeling I had when I tried those socks on Ana and we were discussing how many more stitches it takes on size 0 needles than it does with thicker yarn on larger needles when suddenly Jane said, "It hit my brain!"

That was that and dinner was over. 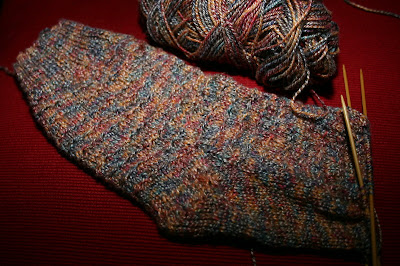