I got a little sad yesterday, what with having to come back to reality and stay on crutches for two more weeks. Not to mention that I got my stitches out and a much smaller bandage and so now can see the disgusting peeling skin that's been under the bigger bandage all this time. If I go missing and anyone wants to try to find me, you all can come sweep my house because I am flaking off big ole pieces of DNA everywhere I go. Plus, did I mention the itching?

(As an aside to the above aside, may I just have a moment of awe for the fact that I had 80 to 100 stitches in my foot? I didn't have that many with both of my c-sections combined! I'm so impressed with myself, too, because I did NOT cry while my doctor was taking them out. Okay, it didn't actually hurt because that's how good my doctor is but still.)

Anyway, I was bummed. My husband, in a move totally uncharacteristic of him, gave me my Mother's Day present early. He NEVER gives me my presents early! I can remember only one other time and that's when I went back to work and he gave me a 22 inch flat screen monitor so I could start my editing job with the right tools. Nothing says 'I love you' like a 22 inch flat screen.

Well, until now. Now there is something else that says 'I love you' in a mind-bogglingly HUGE freaking way. 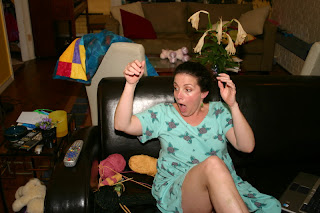 As evidenced by this photo and several others, none of which shows my mouth closed. 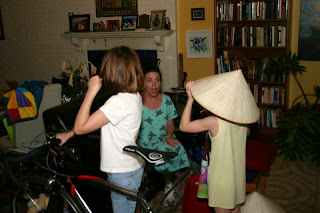 In case you can't tell, it's a new bike. I tried to find a picture where you could actually SEE the bike but I'll just have to take a picture later --mostly this one just shows the mess in our living room. It has PINK clipless pedals!

It's a Fuji Roubaix Pro and it is tricked out like only a real gear head who loves his wife could trick a bike out. He worked with Missy Ruthven from Austin Tri-Cyclist, whose daughter is in Jane's class. (If I looked like Missy, I'd just walk around naked all day.)

This present means so much to me, because one of the casualties of my Foot Fiasco is that I can't be a runner anymore. Actually I haven't been a serious runner since I started having serious trouble with my foot, which has led to some weight gain and some loss of self esteem on my part. (Isn't it amazing how we women can totally kick hiney in any number of areas but as soon as we gain a little weight, nothing seems to matter but that? I wish I wasn't so shallow, but in truth, well, I am. I want to kick butt and be thin at the same time.)

Anyway, my husband is a serious hobby cyclist--he loves it. I'm so hopeful that after we figure out the shoe thing (because my foot will be shorter after all the healing is finished, and the motion will be different so I have to move my cleats up to the ball of my foot--isn't that just such a lovely coda to this whole experience?) that I can become as impassioned as he is about cycling and that it will be something we can do together. Or, if not actually together, because sometimes those kinds of things bring out the worst in us (me), maybe we can at least TALK about it together.

Thanks, Coop, for breaking your own rule about giving presents early, and for making my day, and for believing in our future as a fit and active couple. I like you SO MUCH that I might even let you take my new bike for a spin.

PS: About Jane's outfit: well, her class had a pajama day yesterday and then a friend's dad brought her a hat from China... Just wanted you to know that.
Email Post
Labels: Coop family foot joy mothers parenthood races what makes a life work