It occurred to me this week that I've been branded a humor writer. I mean, I've known that and frankly, I've been a bit shocked by that because if you knew me, you wouldn't think I was all that funny. But regardless, that's what everyone says and I'm just grateful that people are laughing instead of crying. This week, I was actually feeling lucky because, as a humor writer, I'm not expected to write about the very serious and horrible things that happen in the news — like the Virginia Tech mass murder of this week. I planned to just ignore it and move on, you know, because I'm a HUMOR writer and there isn't anything remotely funny about it.

But the thing is that aside from being a humor writer, I'm also a sensitive human being who is raising kids who will one day go fearlessly off to college. And I'm a human being who occasionally feels too much grief for this world --I get depressed when I think too long and too hard about the sheer waste all those senseless deaths. Above all, I am a mother and I've already had many doubts about bringing even more sensitive human beings into a world that makes less and less sense to me.

Also, I'm a woman who tends to live too much in my head, which makes me obsess over details like the fact that this was only a week before school was out and you just know so many of those kids had spent their last hours on this earth cramming for final exams. And why, if there were all those bomb threats, couldn't one have happened just before the shooter got to campus with his loaded Glock? And speaking of his gun, how come it never works like it does with hand vacuums and shoes –you know, where you have the machine but can't buy the filters for it or you have the shoes but can't find matching shoelaces – why did the store where he bought the gun just happen to have cartons and cartons of live ammunition for that gun? And did anyone think to question what a 23-year-old college student needed that much ammunition for? It's not like a Glock is a weapon used in HUNTING --it's sole purpose is the kill people, right?

And then the shooter himself. Clearly he was mentally ill. Wouldn't you think that I would have more compassion for him somehow? I don't though --I have no compassion for him AT ALL. I have not one kind impulse in his direction. I wish he'd never been born. This makes me a bit ashamed of myself, because am I so perfect that I can sit in judgment? I don't know --it seems like this kind of reactive response brings me closer to his level than I am comfortable with.

It reminds me of a story my Deep Friend Heather told me –which I will now tell badly and leaving out many details but you'll get the general point. A reporter (or the Dalai Lama –I honestly cannot remember and with My Deep Friend Heather, both sources show up frequently in conversation) was interviewing some Tibetan monks. These monks had been beaten and tortured under a corrupt government and many had served decades in prison. One of them said, "Yes, I was in great danger." The reporter or the Dalai Lama--oh hell-- the PERSON nodded in agreement. "Well, YES, I mean, you almost were killed."

"No," said the monk. "I was in danger of losing my compassion for my oppressors."

And so, in losing my compassion, and in the horror and shock I feel that something like this could happen at an Institute of Higher Learning (remember that I am the daughter of two college professors and I’ve always thought that the worst thing that could happen on a college campus was that the dean could turn out to be a political asshole whose agenda was in direct conflict with that of my parents') and in the very deep despair I feel on behalf of those parents and students, I could feel my glass leaking into the red “almost empty” zone.

So, I did this: I cast on some socks. 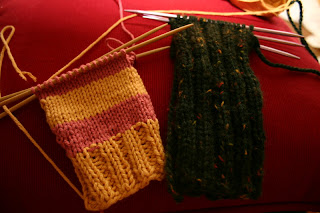 The striped ones are for Ana and the others are for my husband. I spent a lot of time researching toe-up socks and circular needles and how to make stripes… There’s something very comforting about clothing the people you love in something you’ve made by hand with all the love and protection and care you can muster.

I wish I could make them suits of armor.
Email Post
Labels: real world