The Cooper Women, as I like to refer to us, have colds. I'm trying not to say anything about how much I LOVE it when the kids go back to school and start carrying infectious diseases home because I complained so much this summer when they were home every day, pristinely healthy and driving me crazy. Seems a little inconsistent. Anyway, Ana missed school on Monday and Jane is home today, having run an infinitesimal fever yesterday evening.

She probably could have gone to school today.

Okay, she really could have gone to school today.

I admit it. I let her talk me into a free day, but not because I don't think school is very important. No, really! Honestly, it gave me stress to learn that Jane missed fifteen days of school last year! (We took the girls out of school for an entire week to go to Mexico for my brother-in-law's wedding and then both girls ended up with the flu. Ana missed fewer days because, she, poor unlucky thing, mostly gets sick over weekends.)

But you know, my girls are still so little and it breaks my heart to think of them sniffling listlessly through class, just miserable. I mean, as long as I have the luxury of being able to keep them home, it just doesn't seem like a day filled with pampering and Speed Racer cartoons is the worst thing in the world. Not to mention I feel guilty about sending her and getting the other kids sick, although I seem to be the only parent who keeps her kids home for colds.

And do you know what this makes me? Do you?

A big SUCKER, that's what.

I believe Jane summed it up after she went with me to the grocery store just now and did her usual chocolate donut (she only eats the icing) followed by a red bell pepper chaser. I know you don't believe me, so look here: 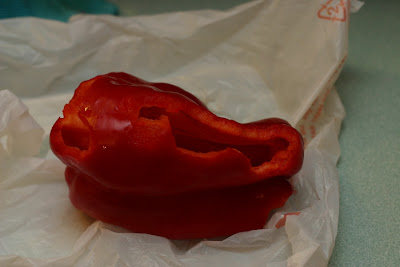 Then she went to the magazine rack and picked out some horrible Polly Pocket/ Barbie/Bratz advertisement in the form of a magazine that cost $4.50 and on the way home, said artlessly, "Being sick is fun!"

And then to herself, "Well, until you throw up."

hokgardner said…
Lily woke up saying her throat hurt when she swallowed. I took her temperature, which was fine, and briefly considered keeping her home. Then I looked up to see her climbing the door frame (a trick she learned from her big sister) and decided maybe she wasn't sick. Then she had a complete meltdown in the car over a sweater that wasn't buttoned correctly and was listless when I dropped her off at preschool. I beat myself up all morning wondering whether the meldown and listlessness were signs that she was coming down with something. But when I picked her up at lunch time, she was just fine. She was having so much fun that she didn't want to leave.

Suna Kendall said…
They kept telling me the kids should stay home until 24 hours after the fever breaks, so you were justified.

One year my kids missed a lot because we mis-read when spring break was and booked ten days in Ireland to see the grandparents DURING school. One teacher was so nice, and said, "Well, international travel is VERY educational."
September 12, 2007 at 3:55 PM

DK said…
It's all fun until you throw up.