I had a migraine today so I didn't get to go with my family to the beach. They headed off and I stayed home and did stuff like praying to die. (Seriously --I know you think this is an exaggeration but I've had, what? 25? migraines this year so far and every single time, I've reached that moment when I would simply rather be dead than endure one more moment of that kind of pain. It doesn't matter that I have two kids and a husband who depend on me. All of the blessings in the WORLD don't matter one bit because, gosh, when you get to that level of pain, you would just freaking rather be dead. I only tell you this because if you know someone who has migraines and she says, "Dude, it's so bad I would rather be dead." you'll know she's not exaggerating. I am serious. I also know that it will pass --but I'm one of the lucky ones that way.)

I did some knitting when I started feeling better. Then I went to Big Lots, where some 70,000 crying children were converging, to buy some bribe presents to try to compensate for being so incredibly lame and missing one of two days at the beach. Honestly, I really worry that my children are going to think of me as this gimpy woman who never goes along on the real adventures and has migraines that interfere with having real fun.

Do you ever wonder how your children will remember you? Because I worry that mine will remember me like I remember MY mother--I can't remember her ever playing with me but our house sure was clean.

My husband meanwhile, was learning to "skim board" which is where you run and get on a board thing and try to ride along, on water just above the ground, sort of like a skipped stone without the skipping part. No, it's sort of like running and sliding on a wood floor. Only you're on water and on a board. See? 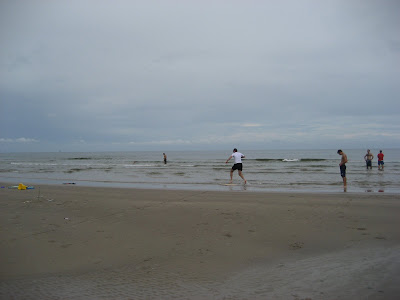 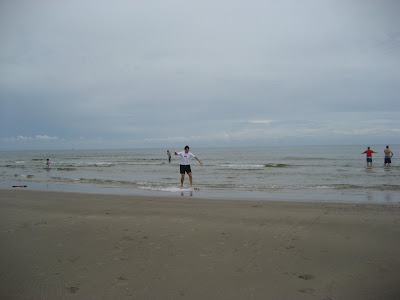 The other thing *I* did while my family was off having fun was to make friends with the little kitty who has adopted my MIL. In addition to her dog (Brandi) and the cat (Gary. Gary Cooper. He was an old college cat of my brother-in-law's and he's hilarious. Orange tabby. Of course.), she has this cat who officially lives next door but spends all of his time on her back porch. 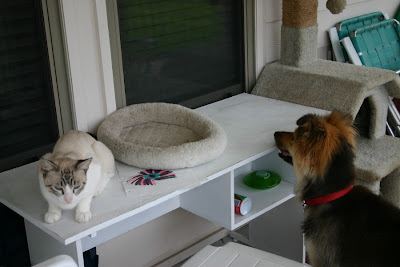 This cat loves my MIL's dog. Seriously, the two have a THING. It's so cute.
I wanted to name this kitty Rufus. My husband turns out to have a big aversion to this name. 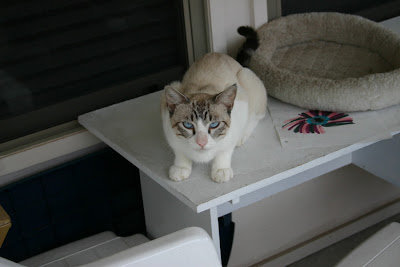 They play together in this very violent way that results in no bloodshed but is still really entertaining for those of us watching.

Anyway, such was the day. I have to go sleep in a tent now to prove to my older daughter that I'm not completely a washout... 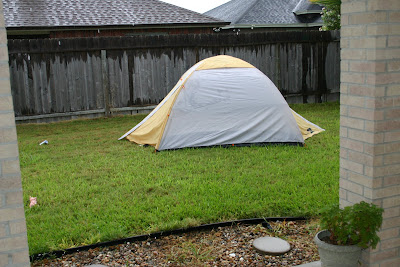 This is the funny wine label on my MIL's wine --isn't that hilarious? I will refrain from comment, (y'all know how I feel about potty humor.) (But, just so you know, it's killing me.) 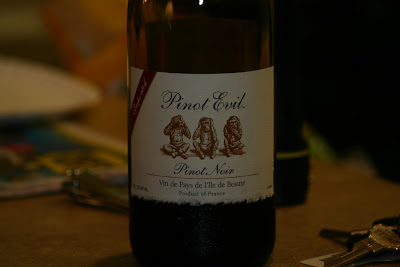 hokgardner said…
I laughed out loud at the wine bottle.

I'm sorry you had a migraine at the beach. It's awful to get them at home, but on a trip it's even worse. All I want to do is curl up in my own bed with my own crisp, cool sheets and contemplate putting an ice pick through my eye.
September 2, 2007 at 11:18 PM

Anonymous said…
Ouch. My MIL gets migraines, terrible ones. I know not to complain about a bad headache around her. She looks at me, like "honey, you don't know pain." I mean, I've popped out a couple of kids and that hurt but that was YEARS ago and I'm 100% certain I'll never go through that again. I'm sorry your migraine is messing with your holiday.

Did you not use the zoom lens because the thought of us all gawking at your husband was a bit too wierd? Keeping things at a nice safe distance? Yeah, good idea. I think I was starting to develop a little crush...

Barb Matijevich said…
No, you can believe *I* would have used the Zoom. But since I wasn't there, my MIL took the pictures. Her pictures are distinguished from the pictures my own mother takes because people have heads in my MIL's pictures. You just can't see them.
September 3, 2007 at 9:40 AM

DK said…
Ugh, migraines on vacation suck even more than regular migraines, which suck plenty. I get all sorts of weird auras and nausea and crap with mine, too. Hate that.

Suburban Correspondent said…
Do you try drugs (legal ones, that is) at all? I get cyclical migraines, and if I take ibuprofen early enough, it keeps the pain from getting to the suicide-contemplation level. My doctor friend keeps telling me to get some prescription drugs for it, but I never get around to making an appointment (because I never think of it until a headache hits, and then it's too late).

I hate thinking that my kids will remember me as always having headaches. But at least I'm sort of nice to them when I don't. Maybe it will balance out.
September 3, 2007 at 4:34 PM

Barb Matijevich said…
I take Imitrex, which is probably ruining my liver or some other evil side effect so I try not to take it very often. That's actually kind of a problem becasue if I wait too long, it doesn't work. And then I've ruined my liver AND still have headache. Like DK, I get the "throwing up for 12 hours, weird visual disturbance" kind. Mine are tied to hormonal fluctuations and, get this, sharp drops in the barometric pressure. (My husband always asks if the fish are biting. If I wasn't puking, that might be funny. Maybe.)

Today I woke up with a headache but took Aleve and Sudafed because I took my last Imitrex yesterday. NOw I'm ruining my liver the old-fashioned way.

Anonymous said…
Ugh. I've only had migraines twice -- triggered by watermelon -- stopped eating THAT! I have learned that I would be willing to commit suicide to stop the pain.
September 3, 2007 at 6:43 PM

hokgardner said…
I'm now getting even stranger visual disturbances before migraines. They're a new development in the past month. I literally couldn't see at Amy's Ice Cream this afternoon. Fortunately, two neighbors were there to help corral the crawling baby.
September 4, 2007 at 5:34 PM

Anonymous said…
Love the wine! I've had that one, actually. I do have problems speaking no evil when I've been drinking, though. ;D

You're lucky to have a MIL who drinks. Mine would call the school board or something if she ever saw me partaking... Some people have all the luck. Well, except for the migraines, of course. Those suck. Except for the first time I had an "aura" and I thought I had seen angels. Until the pain hit, that is.
September 4, 2007 at 8:28 PM