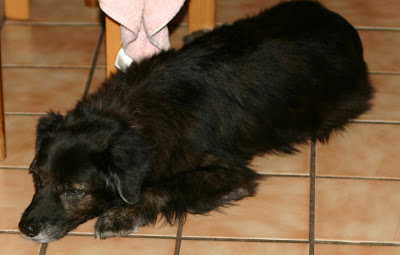 Thank you all for loving my old dog. Sydney is back home and decidedly dizzy/disoriented. She keeps bumping into things like she's got a snoot full ...but this is not as funny as it sounds. (In fact, it's not funny at all. Go figure. Also on the Not Funny list, she is having some intestinal distress due to the disorientation --I guess it's a lot like vertigo. Anyway, send some positive vibes for my living room carpet. Ick.) The vet thinks we'll see this resolve within two weeks. If not, there's something else wrong. If so... well, every day is a blessing with my old friend.

I'm feeling very hopeful, though, so I decided to finally proclaim my faith in extreme silliness. Behold, the image of the Noodly Master as it appears on my van. 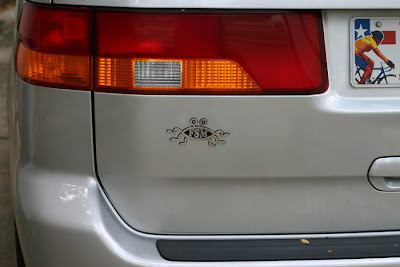 It doesn't look quite straight to me but it's just hard to GET spaghetti straight.

And now, more than you ever wanted to know about our lawn.

Today, I mowed the lawn like a normal person.

Well, I know that not many normal people like to mow the lawn as much as I do but that's not what I mean, I meant that I mowed it in running shoes. It's only the second time I've mowed it since my surgery in March and the first time I wore the dreaded walking boot thing and was crippled for a week. But today I got to use my shoes and things went fine, except I forgot to use sunscreen and I'm a little sunburned.

So, I love to mow the lawn but I hate to use the Weed Eater thingy. No, that's not exactly true. The thing is that I can't seem to use the weed eater thing. Look what happens when I try to use it --and I mean, try HARD. 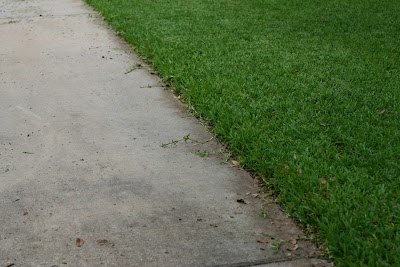 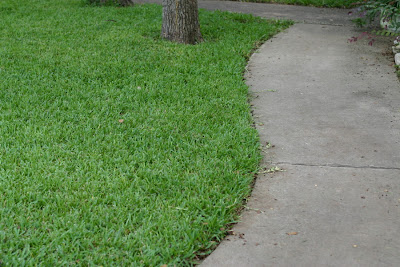 It's really frustrating. I seem to be missing some Weed Whacking gene and I really hate that *I* can't do it but my husband can do it perfectly. Only he doesn't LIKE to do it. Which is why our curbs all look like this: 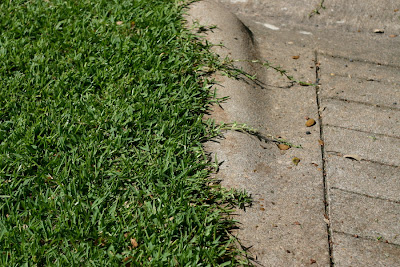 I think the Weed Eater might be sexist. It's just like when we used to have this lawn mower that only Coop could start. That just made me crazy! We have an cordless electric mower now. Actually, in the spirit of conservation, we share it with our neighbors. I think this is very cool because honestly, does it ever strike you as excessive that we all live in these houses side by side and we all have the same tools and lawn mowers, etc.? I guess I'm odd in that way, too. (Next I'll be wanting to start a commune.)

You know how the Yarn Harlot has that squirrel that steals her fleece when she puts it outside to dry? (Well, she DID have--read this for how she got revenge.) Well, I have a Squirrel Thief, too. Only, since I don't spin, there is no fleece to steal. 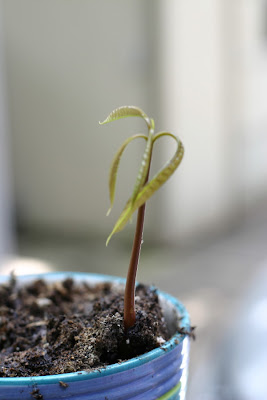 This is a tiny Mango Tree, grown from the seed of a mango by yours truly. I have managed to grow three of these little things. The first one, I did the research and took the hard husk off of the seed and grew it tenderly in a pot of growing material in a Ziploc bag. When it sprouted, I put it in a tiny pot and when it was a little bigger than the one in that picture, I transplanted it into a bigger pot. The next morning, my husband was leaving for work and I brought it out onto the porch. I told him how I'd grown it from a mango seed which is sort of like a big Lima bean once you take the husk off and how proud I was of it. He realized that he'd forgotten something inside and I followed him back in and left the plant on the deck railing. I went back out to move it back into the safety of the screened-in porch not five minutes later.

Seriously. The pot and dirt were still there but some thieving little squirrel had apparently been eavesdropping on our conversation and come down and taken the tender seedling and the Lima bean seed for his breakfast.

I did not respond well.

In fact, I plotted and plotted and I grew another one and I wouldn't even show it to the world until it became THIS. 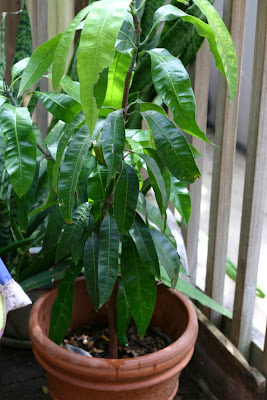 My husband has been known to whisper warnings to the squirrel when I tell this story and today, when I showed him that we had another little mango sapling, he whispered, "SHHHH! Better not let the squirrel know!"

Maybe I need one of those food dome contraptions.

Oh, and here's one last magical thing that happened today: 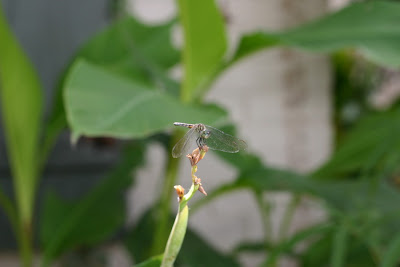 You might have to click on it to see it. Isn't it really beautiful and delicate in a, um, buggy kind of way?
Email Post
Labels: A picture is Worth at Least Ten Words foot joy pets poop squirrels what makes a life Yarn Harlot

hokgardner said…
I think you and I may be twins in separate bodies. I love to mow - the nice neat grass, such wonderful instant gratification. But I not only do I hate weed-eating, I'm incapable of doing it. And believe me, I've tried. I think it's because I'm left-handed and the wead eater is right handed. B says it's because I'm inept.

Anonymous said…
I hope Sydney is better soon. Picturing her bumping into things just about breaks my heart. Oh...I have a blogging trick for you. When you go to the Yarn Harlot's blog, click on her recent entries "this is how we wash our fleece" or whatever it is and the full url will come up. Then you can just use that full address for the link. Does that make sense? Maybe I should just come over. LOL!
September 9, 2007 at 9:17 AM

Lynn said…
I just went back to read what happened to Sydney and I'm SO sorry this happened to him!! But I'm glad that he is recouping and is home. Poor thing.

And I hear you on the lawn. I dont do ours, but I understand the feeling of something being DONE. When you are a mom, no wait, when you are a WOMAN, it seems you can never catch up. There is ALWAYS laundry, dishes, housework, outside office work, etc. But like you said, once the lawn is done, it'd DONE!!
September 9, 2007 at 9:25 AM

Carrie Penny said…
I just saw your comment on Sarah's blog, I think I could convert that pattern into a knitting pattern, but I only have two questions for anyone that designs something like that.... Are you trying to terrify every child that comes over to your house?! And were are you getting your LSD?
September 9, 2007 at 10:15 AM

Barb Matijevich said…
Okay I fixed the link --I didn't even see those Recent Entries listed. Hmmm. Too much wine? Too little sleep? Too much pet stress? I'm almost at the end of Harry Potter?

Carrie, you should see the UTERUS Kate knitted. Talk about scaring children...

Syd's not eating today which is a very bad sign, in my book. She's normally such a chow hound (Hah! Pun!). And I just had to roll up the area rug in the living room and take outside to wash it with the hose and some shampoo. Unfortunately, after my yardwork festival yesterday, my back is killing me so I have to wait for my husband to get home from his ride to tote that thing outside. More sexism? Is it too late to just go back to bed??
September 9, 2007 at 10:42 AM

Annabanana said…
ahhh - we are sending healing vibes to Syd from here in FL. And some for you, too, because it really sucks when your friends hearts have to deal with things like their best dog friends no doing so well. LOVE to you all!!! (ann can't do the weed whacker either, I can't start it, and I can't use it, I admire those lawn guys that can make a perfect edge at a jog while smoking a cig.)
September 9, 2007 at 2:21 PM

Brendy Vaughn said…
I went to the Church of the Flying Spaghetti Monster site - hillarious! Thanks for the link.
September 10, 2007 at 7:02 PM