Over Easter, we went to the beach with my parents and my sister and her two-year-old grandson. The weather was terrible but we’ve had a good time playing inside and it's not like I could actually go to the beach since I was on crutches from my foot surgery anyway. Of course, I checked the weather before we headed down there and nowhere did it say that we would have near-freezing weather. Because if it had, I might have packed some warm clothes for the girls and then maybe we wouldn't all have colds now. But I digress.

There were several hilarious moments because of the name situation. My girls have always called my mother, "Mutti." In fact, ALL of my mom's grandchildren have called her, "Mutti." But when my SISTER became a grandmother (rather unexpectedly,) SHE wanted HER grandchildren to call her, "Mutti."

This is very confusing for everyone, especially when the two are in the same room together. But then add in the fact that my sister and I are calling my mother, "mom" and each other by our given names AND that my husband, who is "Dad" was there, too, and sometimes, when he's talking about me to the children, he calls me, "Mom," you can exactly see why this had all the makings of a Gilbert and Sullivan farce.

My sister got crabby, though. She wanted to be called "Mutti," ostensibly in homage to my mother and she thinks we should all stop laughing at her right about now. But I'm sorry, it’s funny. She should think about joining in the laughter because it takes a lot more energy to stay defensive all the time. (Just ask my therapist who has worked on this particular issue with ME for...well, forever.)

I think a lot of unhappiness could be mitigated if we all didn't take ourselves so seriously. It's like a disease in my family.

Which makes it even funnier that I am a humor writer. 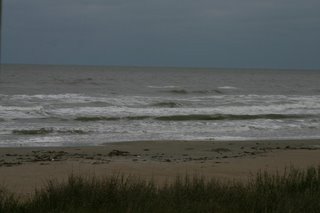 Here are some pictures from the beach. 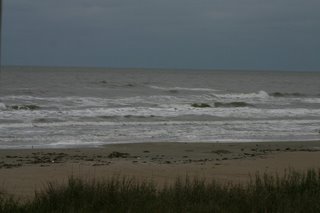 Oh, and look, here's another picture of the gray and cold beach. 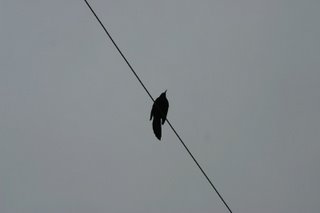 Only the grackles could bear it. (As an aside, if we can kill rats, why can't we kill grackles? They are twice as disgusting.)
Email Post

Anonymous said…
I have GOT to find pictures of the beach that we go to every summer. It looks identical to these shots, except ours is a lake.

Anonymous said…
Did you know Mutti is 'Mom' in english? I called my grandmother Omi which is less formal than Oma. My mother is Mutti.
Interesting. :)
Your pictures of the beach are very nice to look at.
Thank you for sharing!
April 11, 2007 at 1:34 PM

Anonymous said…
There was the Father's Day years back when my kids gave their father a mug that said "Dad" on it. They were all kinds of upset when they caught their grandfather using it later. He was confused. why shouldn't he use the mug that said "Dad". Because there was one for him that said "Grandpa" but they hadn't given it to him yet.

When I became a grandmother, and started being called Nana - my kids started calling my mother Great-Nana. This transmuted into Nana the Great in short order. Mom seems to be ok with this.
April 11, 2007 at 11:21 PM