So, I've been following this new blog called Confessions of a Pioneer Woman and it is the coolest thing. It's about this woman who was a hard-core city girl from LA who married a guy (she calls him "Marlboro Man") and moved to a big honking ranch somewhere in the middle of nowhere. She has four kids, a fabulous camera and HER OWN TRACTOR. I think I have the equivalent of a man crush. (What exactly IS the equivalent of a man crush? In fact, what IS a man crush? Oh, Google to the rescue: man crush.)

Anyway, in addition to her really amazing blog, she also has, are you ready for this? A COOKING blog. Well, I'm a pretty good cook (um, at least once a month or so), so I decided to take a page from her blog and try to document my effortless cooking style --my EASE in the kitchen, as it were.

I had intended to document all this ease on Saturday night when I grilled chicken but unfortunately, I had already had about two glasses of wine BEFORE I PUT IT ON THE grill so it turned out like, um, well, THIS: 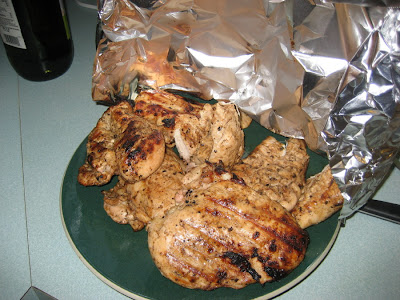 Those black parts certainly document my style and grace with poultry, don't you think?

The accompanying dish was roasted asparagus. I had bought a huge bunch of it when my parents were in town. This was now looking a tad tired, so I chopped the ends off and submerged it in water --hoping that maybe it would respond like wilted flowers. 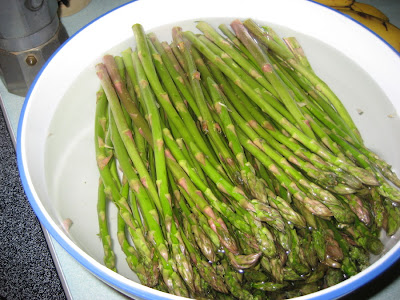 It didn't show noticeable signs of perking up.

I put it in a pan with olive oil and kosher salt and put it in the oven at 450 for about 20 minutes. Maybe a little longer --depending on how fast I drank that last glass of wine. 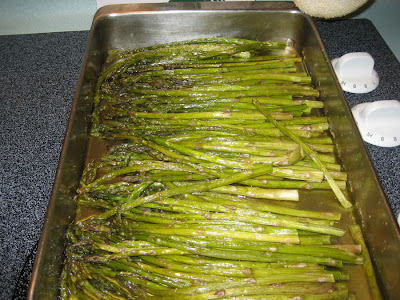 (Have you ever noticed how people who cook take great pains to detail the type of salt they use? I took the obligatory picture of mine --here: 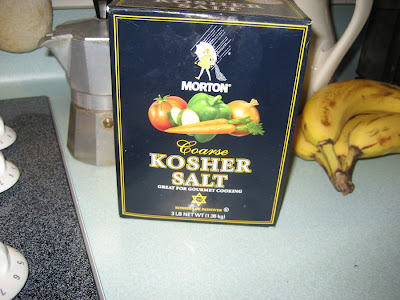 but honestly, I'm just as likely to use the cylinder with the girl and the umbrella on the label. I'm only using this Kosher salt because I bought a huge number of boxes of it once when I was baking a whole salmon in salt and I had forgotten about them until my mom came down and cleaned out my pantry while I was confined to bed after my foot surgery. (She's sneaky like that.) I will say that it feels good to pinch some coarse salt and throw it around like Emeril.)

(Wow! THAT, my friends is what I call a DIGRESSION. I may not be a great cook but DUDE, I can digress like no one else. I even use PICTURES!)

So, anyway, here's a picture of the chicken on the grill when I first noticed that it was looking a bit well done. 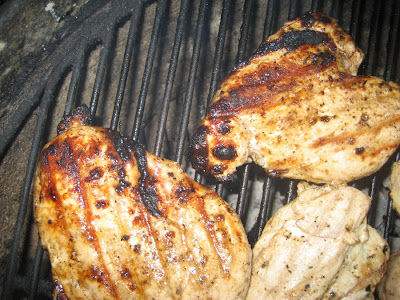 In the ensuing panic, I managed to somehow get the chicken marinade all over the window to the door that leads out to the deck where the grill is. I thought this was so funny that I took a picture of it. 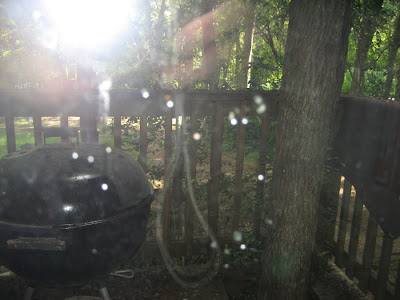 Is it just me or does it look like there's a noose in that picture? It would figure that we wouldn't have a FACE in OUR window. Just some veiled threat if I don't get the freaking chicken off the grill and the marinade off the window...

Did I mention that I'd had wine?

Did I mention that in the middle of all of this, my husband called us all outside to take a look at General Frog--who is this huge frog who lives beneath our hot tub heater? 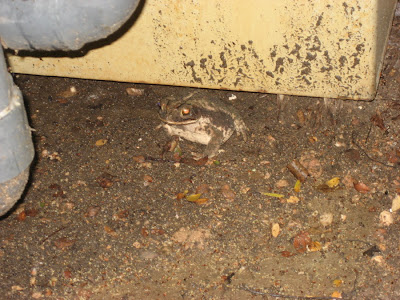 Did I mention that I honestly did manage to document a soberly cooked, successful meal? It's just that it wasn't until our regular Sunday steak dinner, and, well, it wasn't cooked by me.

More about that tomorrow.
Email Post
Labels: dinner humor Maybe I Should Just Shut Up wine

Anonymous said…
Okay, so you are saying that grilled chicken does not always look like that?
August 6, 2007 at 5:37 PM

Barb Matijevich said…
Well, I guess it depends on who cooks it. If it looks like this AND it tastes like rubber, um, well, chicken, I guess that person would be me.

I have never been that great with the grill. Or with wine, for that matter. I mean, I'm darn good at drinking it it. Less good and doing anything else at the same time.

hokgardner said…
I'm impressed that you took pictures while drinking and cooking. I can only do one of those at a time, not all three. : )
August 6, 2007 at 6:13 PM

Barb Matijevich said…
Well, the cooking one is debatable. And the drinking one sort of made the images of nooses (neece? Noosi?) appear in my photography. So, really, I'm pretty darn good at DRINKING wine and less good at anything else.

Lynn said…
Yep, I see that noose, too. You've just reminded me of a family story that involves frogs. I'll try to get it posted sometime this weekend.
August 9, 2007 at 8:46 PM