Jane has been very patiently waiting for me to take her shopping for some flip-flops. I've been stalling, hoping she would forget because my husband HATES the girls to wear flip-flops and the only thing he hates worse than the girls wearing flip-flops, is fighting with the girls over what constitutes proper footwear.

(Note: he himself HAS flip-flops and he wears them. It's not that he hates ALL flip-flops. He just hates the idea that the girls will wear flip-flops and lose out on a chance to run around and expend a lot of energy so that they have to put themselves to bed early. But I digress.)

But anyway, I caved and told her I would take her. She came down dressed to go shopping like THIS:

She said, "I want everyone to think I'm RICH."

I was a bit shocked. I mean, since when is THAT a core family value?

"Why would you want people to think you're rich?" I asked, trying not to put anything at all in my tone of voice.

"Because then everyone would be my..."

My mind races, thinking she's going to say "friend" and then we'll have to have a long talk about how you can't BUY your friends and how money won't give you good character and people who would only like you for your money are not good friends anyway...

But true to The World According to Jane, she doesn't say, "friend." 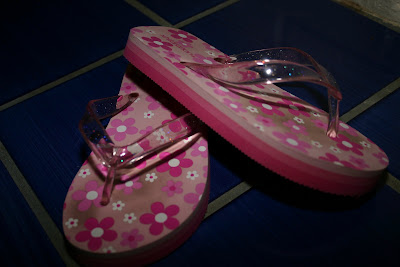 Barb Matijevich said…
Well, in case you want to send your *butler,* those sandals were a gift form our housekeeper who brought them back from Mexico with her. Jane has actually outgrown those but she won't stop wearing them. In my head, it's reasonable that I bought her hideous flip-flops today and can "disappear" the others tomorrow.
August 4, 2007 at 8:02 PM

Barb Matijevich said…
I guess I should have changed everyone's names for blogging purposes but honestly, it was just too much to keep up with and since I have published a book talking all about them, I guess I felt it was too late. Plus, you know, hope springs eternal that someone will come to my house and steal Scout.

(I guess you know that Jane means "Gift From God? I did 20 weeks of bed rest with my pregnancy with Jane, scared out of my mind that we were going to lose her so that's what she felt like!)
August 6, 2007 at 4:02 PM