I Was Kinda Hoping for a Tapeworm

Tomorrow is the first day of school for my girls. Jane is going into first grade and Ana into fourth. They are both excited about the new school year and Ana's already packed her backpack and picked out her clothes for tomorrow.

Neither girl is looking forward to the return to our No Television on School Nights policy but there is no way that I am signing up to fight over television every single freaking day. Sorry. It just works better to have an absolute rule, because I get really tired of negotiating and then hearing my husband complain that I am too lenient with "screen time." But at any rate, I decided if they had to give up something, *I* have to give up something.

I'm giving up my hips.

Well, I'm not giving them up entirely, just like the kids will get to watch television on the weekends. I'm giving up the excessive hip habit I've acquired since the first of the year, but particularly over the summer. It's just time for me to enter the real world and stop messing around and pretending I'm all cute and between films when really, the truth is that if I get any fatter, I'm going to have to hang a red flag off my butt. So, today, I climbed on my bike on the trainer and sat there for 25 minutes, pedaling and listening to my Ipod. It's not a huge workout but it's a start.

Of course, I had to let the kids watch TV while I did it but I guess we're all starting slow. 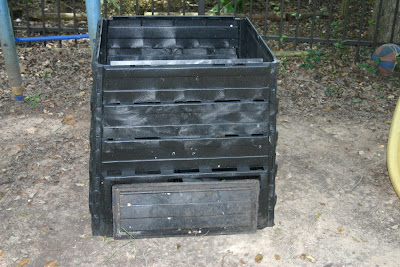 The girls decided they wanted to start a composting program in the spirit of our neighbor who was killed so tragically in a car accident this past week. He was very concerned about the environment and was a vegan, etc., and as we were talking about how we could possibly do anything to honor his memory (you know: reduce, reuse, recycle) we decided to start a compost pile. Because, frankly, the amount of garbage we generate in an average week is appalling.

My neighbor on the other side had a composting hutch he wasn't using and he gave it to us. The hilarious thing is that they never use their backyard and they don't have a dog or really any reason to get out back very often. So in the course of getting the hutch for me, my neighbor found and pitched this many tennis balls back over the fence. (There may have actually been more since I found another three just walking back up to the house.) 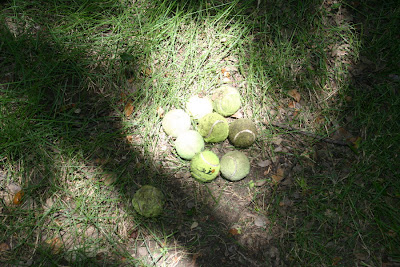 I've written before about our dog Scout who lives to play fetch. He's a better fetcher than I am a thrower so the balls frequently go over the fence. My neighbors are the best sports about all this kind of stuff. I don't know how we got so lucky to move exactly here right between the best neighbors in the world but there ya go. I don't know how Scout got lucky enough to be adopted by us, either, but he did. It's just dumb luck.

Of course, Scout is not really that SMART. Here he is frantically trying to find a ball to play with and totally missing the one at his feet. 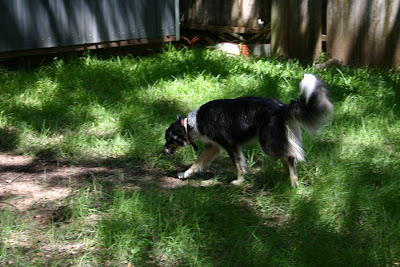 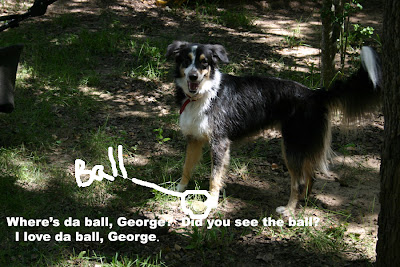 (This is my first time editing a photo in Photoshop! It only took me about three hours!)

And yes, that's really what our back yard looks like. It's horrible. I tried to mow it yesterday but I got started too late because I'd only mowed a little when I heard, "BACK AWAY FROM THE MOWER!" It was my husband. I was so busted.

(Have I mentioned how ready I am to have my foot back to normal and that it seems like it will never be normal again?)


(Just so you know, the formatting of my text keeps changing on me and the spacing I've created keeps disappearing. I've fixed it at least seven times and it still won't just STAY the way I've formatted it. I'm trying not to eat an entire bag of Salt and Vinegar chips out of frustration so I'm just going to leave it now.)

Candy said…
Yup, we are back to school tomorrow too (well, for Jamie anyway)...

Lynn said…
I used to have the same spacing issues with Blogspot. Are you comfortable going over to the dark side (the edit HTML tab)? If you go there, you may find a lot of this: less-than sign + div + greater-than sign or maybe p with a slash or backslash at the beginning and end of some of your paragraphs. If you delete them and any excess returns you find, your text will probably do what *you* want, rather than what *it* wants.

Barb Matijevich said…
See, I always used the html editing function until recently when I discovered the "Compose" tab. But it's been nothing but trouble and if I switch back to html after using the Compose feature, it deletes all of my pictures that I've uploaded.

I'm just going back to using the html function and I'm just not going to care that I have to keep switching back and forth between the preview and the code in order to "see" the entry. I just don't care. The other way is much too frustrating. It causes me to make grammatical errors and punctuation mistakes because I have to keep deleting and retyping stuff.

You know how crazy THAT makes me.

Oh, Lynn, I loved your latest blog post about LittleBit's new job and your conversation with her. You are such a good writer.
August 26, 2007 at 9:48 PM

It's funny about the TV. I was pretty lax this summer but I'm not going to let them watch it during the week either. I feel like I'm killing my kids' brain cells and what kind of a mom does that make me? What potential are we squandering when they could be pretending to be princesses instead?

Suna Kendall said…
Yeah, I have that same issue with Blogger. It's one reason I started blogging from Flickr. Most people read the blog for content. If people want nice typesetting, I guess they can read a book, or pay someone to design you a lovely custom blog with your personal cascading style sheet and precise measurements. Heck, I spent 15 years of my life as a professional web designer, and I still just use Blogger tools. Would rather write than format, I think.
August 27, 2007 at 9:31 AM