I had to go grocery shopping.


No, I mean, I really HAD to go because I hadn't actually done a Big Shop, as I like to call it, since my foot surgery in March.


I have done some Lessor Shops and my poor beleaguered husband has been to the grocery store about five times a week on his way home from work. In fact, this is really the reason why I felt like I HAD to go today, because when I told him that I hadn't gone to the grocery store yesterday because we had all these kids at our house on various play dates, he said, "I think you're just going to have to take those girls and lower the hammer if they are awful." And then he said something about how if I could go, it would make it much easier on HIM and since I've been feeling all guilty about how much he does around the house and with the girls in addition to working a full-time job and funding this little frat party we've got going, I made up my mind to go.


Jane went to a friend's house and I called the mom and told her that I had to go grocery shopping, otherwise the girls could play at our house. Could they come play over here when I got back? I guess I wasn't specific enough about how long I'd be gone, though--but I'm getting ahead of myself.


Yes, we were gone for more than two hours.

And I didn't even buy WINE!


Well, I can't show you because I couldn't take the time to take a picture because I had frozen foods and all that had to be put away as soon as possible.


But I did take a picture of the register tape. 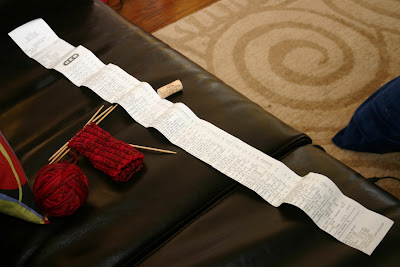 (That's the sock I'm knitting for my neighbor who lost her son in a car accident last week. Because, why, yes, I am the type of person who would have shown up to the Chicago Fire saying, "I have this thimble full of water --will that help? Oops. Spilled it.")

(Seriously, I want to do something and there is nothing to be done. Nothing that will make her feel better. Nothing that will bring her boy back. Not food or flowers or anything at all that hasn't already been provided. So I am knitting and praying for her with every stitch.)

So, get this, we get back from the grocery store and my husband's car is in the driveway. "Thank you, Lord," I murmured. "Ohthankyou! Someone to help me unload all this stuff!"

But no, it turns out that he had forgotten something and come by the house to get it when JANE showed up at the door. My friend had to go somewhere and was waiting for me to get home, not suspecting that I would be gone for more than two hours. And my husband, who had a meeting in about five minutes and needed to leave, couldn't reach me because I didn't have my phone.

So, he was highly stressed and had to leave quickly and he was late. He was really, really nice about it and all, except when he said, "And you didn't have your PHONE" when I think I might have heard a low growl. (It's sort of an on-going source of friction that I am cell-phone-challenged. I never have it when I need it and I can't hear it ring half the time and I refuse to talk on it when I'm driving ever since I read that your chances of having an accident go up by 400% (FOUR HUNDRED FREAKING PERCENT!) if you are talking on the phone.)

So, anyway, he left and I finished unloading the groceries and then I put them away, all of which took me another WHOLE hour, during which I discovered that Jane had dropped the one bag I asked her to carry in, and it just happened to be the bag that had the eggs in it.

Anonymous said…
You know I love.....but,....um,... well, I've gotta side with Coop on this one. It is one of the largest sources of aggravation for me when Ben goes out and doesn't bring his cell phone. I tell him daily "These days, grown ups don't leave the house with their wallets on their cell phones!"
August 23, 2007 at 5:02 PM

Barb Matijevich said…
Are you really upset because you are siding with Coop or because of the amount of money I spent on grocery shopping? (Because actually, it might be one and the same!)

Candy said…
Tom always forgets his FREAKING CELL PHONE too. It drives me completely freaking crazy. TAKE THE DAMN THING WITH YOU.

Okay. And yeah, we've done the $400 shop before. It's scary when you are looking at the fridge and all you see are condiments and something in a tupperware that is a weird shade of grey.
August 23, 2007 at 5:14 PM

Anonymous said…
Oh, Barb, honey!! You need to discover the most wonderful thing in the world!!! ONLINE GROCERY SHOPPING! You spend an hour or so online making out your order while you do "other things", they shop for it, they bag it, they DELIVER it. All you do is put it away. I've been doing this for a couple of months now and I love it! Usually costs a $5 shopping fee and they wave the $6 delivery charge if the order is over $50 (do people really buy less than $50 worth of groceries at a time?). It is SOOOOOO worth it!
August 23, 2007 at 5:28 PM

Anonymous said…
First of all - you are so funny! You are quickly becoming my favorite knitting blog - even more than YH but let's just keep that between us! ;-)

Second - I'm a mom who lost a son...and I KNOW that your neighbor will be blessed. The BEST things that people did for me were (1) Pray (2) Hug (3) cry with me and a dear older couple showed up with toilet paper, napkins and paper plates. I didn't get it at the time. Now I realize how MANY people were in our house - and I didn't have to think if there was TP (not that I was capable of that type of worry then anyway!) I try to always be practical now. So knit those socks with your tears and prayers and GIVE what you can - love, support and knitting. You WILL be a blessing!!
August 23, 2007 at 5:37 PM

Barb Matijevich said…
LC-- We no longer have on-line grocery shopping here in Austin. We DID have it--which was an enormous blessing when I was on bed rest with the pregnancy that resulted in Jane. I think maybe they went out of business right after I was able to do my own grocery shopping again. Coincidence? You be the judge. But totally agree with you: for ANY fee, it is worth it. And still cheaper than a nice long stay in the mental hospital.

I don't know what to say. I am so sorry for your loss and I thank you for your reassurances that while I might not do the RIGHT thing, I probably won't do the WRONG thing --if that makes sense. I can't imagine the pain of losing a child --it is every mother's worst nightmare.

If the YH drops by, I am totally outing you, though. But I think you're safe!

(I was just kidding about outing you. I am so flattered that I almost spit coke all over my screen when I read that. Thank you! Wow! I'm all beaming and stuff.)

Tiffany said…
Good thing you caught that "cluster" thing. I hate to think what that might have done to your rating.
August 23, 2007 at 7:30 PM

hokgardner said…
I did the online grocery too, and I was devastated when they went out of business. I went grocery shopping yesterday here on S. Padre, and if you think groceries are expensive in Austin, you should try the IGA (the only store on the island) sometime.

And I can now successfully navigate HEB with three, count em, three kids in tow. I so totally rock!

And my husband yells at me all the time for not having my cell phone with me. He's just cranky because his is surgically implanted in his ear.
August 23, 2007 at 9:34 PM

Unknown said…
You have girls! Keep taking them to the grocery store with you. It's great training because sooner than you think, you will have a few precious years when they will be drivers and you can send them to the store. Then, of course, they go off to college and get married, but by that time DH thinks it's fun to go to the grocery store with you. (I'm not sure exactly when we became one of "those" couples that used to mystify me when I had a toddler and baby in tow.) I think there's a "larger-than-the-immediate-issue" point to this, but it's too early on a Saturday think about verbalizing it in a coherent fashion.

Just know that someday you will remember fondly the time when you got out of the car at home to discover that the 2-year-old in the carseat in back had unzipped and and eaten an entire bunch
of bananas. And then you get to see him with his own kids.