Those of you who have read my columns for years (So, the thing is...) know that I have a tendency to get REALLY, REALLY creative when it comes to coming up with motivation for diet and exercise programs. There was the Prom Dress Plan, the Toddler Wrestling Fitness Plan, --oh, gosh, as I was going through the archives, I found an embarrassing number of columns devoted to my obsession with fitness and diet. An embarrassingly large amount of time spent examining my ever-expanding navel in print. Yikes!

But okay, I confess that the metamorphosis of my body over the last ten plus years from tiny young thing to largish, middle-aged thing has been the source of sadness and anxiety to me. It doesn't help that my husband is the Incredible Shrinking Man and frequently loses an inch off his waist measurement if he skips lunch. I've been feeling kind of bad about how he married this tiny woman and she turned into not only a much larger version, but also a fairly bad tempered about the whole thing. So, I've been trying to come up with some new motivation. I think I have a new plan that's really going to work.

If you've followed this blog, you'll know that I started blogging as an indirect by-product of having had to stop all exercise and have surgery on my genetically malformed foot. I haven't had any exercise since January, unless you count the six weeks of using crutches, which provided a pretty good arm workout. But basically, it's now seven months of no exercise.

This week, FINALLY, I got clearance to begin riding my new bike on the exercise trainer. I was so excited, I actually CRIED on the way home. (Okay, it's only half a mile from my house, but still.) Yesterday, my husband set up my bike for me and I climbed on and rode, in the lowest gear, for 15 - 20 minutes. It was blissful. Then I did some crunches and a few push-ups. I would have done more push-ups but I guess I have to work up to it.

I will tell you that it's a good thing it wasn't raining when I climbed into my cycling shorts and sports bra because I would have ended it all right there. But thankfully, the sun was shining and instead of seeing myself in the mirror and immediately scarfing down a pint of Ben and Jerry's (Okay, am I the only one who bursts out laughing every time I read the nutrition information on Cherry Garcia? SURE, Oh, SUUURRRREE it has FOUR servings! I mean, if you're a Polly POCKET...), I decided to apply an entirely new tactic. Rather than getting all depressed, I'm going to pretend that I had to put on a lot of weight for a film role and now I'm going to take it back off. Kind of a Renee Zellweger in Bridget Jones' Diary kind of thing. (Well, okay, more like Robert DeNiro in Raging Bull.)

Isn't that FABULOUS?? I'm not really fat--I'm just between films. Doesn't that sound so much better??

Because we movie stars have to exert a lot of discipline and self control, I have no problem posting this picture of me as I embark on recovering from the arduous film role of a lifetime. Plus, I'm hoping that it will embarrass me enough that I stick with it...in case my legendary actor work-ethic fails me. After all, the Oscars are right around the corner! 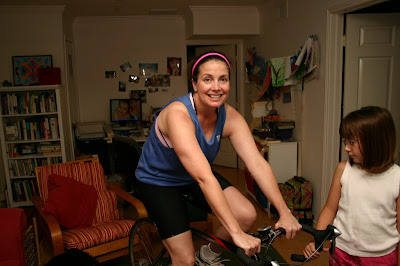 hokgardner said…
I went back and read the Toddler Wrestling plan and laughed out loud at the finger painting, wet dog episode.
August 1, 2007 at 9:46 PM

Annabanana said…
Not to mention that your triceps look BUFF and you have that nice muscly line on our downstroke leg's quad in this picture! I'm setting up my trainer today to ride with you virtually! (it's been rainy here too)
August 2, 2007 at 6:30 AM

Unknown said…
Hmmm, I have been going about this all wrong. Up to now I have been using the excuse that my weight has been due to having a baby. (but he is fifteen now and I only have one more year to use that excuse)
I too am more in the Raging Bull catagory than the Bridget Jones!
Thanks for the inspiration.
August 2, 2007 at 7:41 AM

LaDonna said…
The Prom Dress was my absolute favorite! I still find myself walking "Top Model" style toward the printer or to the coffee cart at work from time to time! ;)

So, count me in as another who's between films. I've been between films since my 11 year old daughter was born. I finally found a strategy that worked for me too....the Blog of Shame. When I started losing weight, I posted my ACTUAL weight on my blog. And I tracked my weight loss journey by posting actual weights after each weigh in. I was so ashamed of the original weight, I'm now down 32 pounds since January and still losing!

ckh said…
You need to see "10 Items or Less" with Morgan Freeman. It will simply reinforce your perspective.
~Between films myself, Carol
August 3, 2007 at 1:28 PM

Lynn said…
OK, I'm looking for the "plump chick" in the photo and not finding one. I see big happy eyes and a beautiful smile. Your legs look like mine did before I had five kids, so *I'm* not seeing a problem anywhere ;)

Congratulations on getting permission to get back into shape. It's a lovely feeling to be comfortable in your own skin, regardless of its size.

DK said…
Knock it off, you're gorgeous. And "fat" isn't a word I'd use anywhere even near a description of you. As opposed to say, gorgeous. Striking. Extraordinary. Lovely. Brilliant. Remarkable. And the tried and true classic, fabulous.
August 3, 2007 at 7:52 PM