I've been reading some other cooking blogs lately and I just really, really wanted to feel like I could hang with the writers. I mean, I can walk through my kitchen without injuring myself at least 50% of the time and SOMETIMES, I can cook a decent meal. Obviously, I am well-fed. So I thought, "Well, heck, this will be easy!" Naturally, my first attempt at writing a cooking blog was a disaster. (Click here to see how I burn chicken.)

I thought I'd try again, though. Because we have this little tradition in the Cooper Family called Steak Night. It developed as a means of getting some protein into my older daughter, who would really like to exist on foods that don't contain any nutritional value whatsoever. So, we started having Sunday Night Steak Night and, since it requires a great deal of expense both monetarily and in effort on the part of the parents, naturally, the girls love it. (Actually, my husband says that if we continue to feed them rib-eye steaks, he's pretty sure they will never leave home. This is working for me, at least until they reach their teens. I still kind of like them.)

After I burned the chicken the other day, I was determined to document Steak Night so that you all could see that, really, I'm not so awful in the kitchen! No, really!

Well, actually, I'm probably lying, as these pictures will undoubtedly prove. But in the words of the immortal Lyle Lovett. "What would we be if we didn't try? We HAVE to try."

First I have to tell you that my husband went shopping at Lowe's over the weekend and before he left, he asked me if I could think of anything we needed. I said, "We need a new charcoal starter and they are pretty cheap there."

So, he brought one home. But he didn't buy the cheap one because on the same same aisle as the cheap ones was the Grandpappy of All Charcoal Starters and he HAD TO HAVE IT. (This is what happens to me in the yarn store, too, so I couldn't say much.) Here is a picture of the new charcoal starter next to the old one. 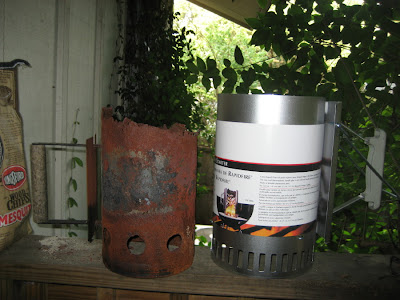 I wish now that I'd taken a picture of the new charcoal starter when my husband first lit the coals because he didn't take the paper label off of the thing and it was a pretty darn spectacular fire we had going. In fact, it was so spectacular that rather than take a picture, I went and got the fire extinguisher just in case. So this is as close to a really spectacular picture of that as you'll get. Here's the charred paper on the grill. 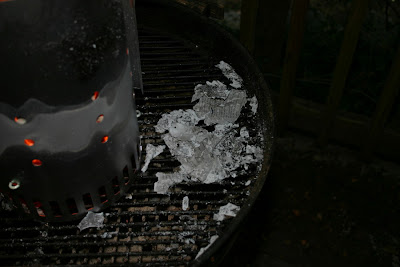 Here's a picture of the coals merrily burning in the new charcoal starter. I had to take a picture because my husband dashed to the store to get all the things I forgot to buy (We've only done this tradition since Ana started school some four years ago. I can't be expected to remember everything.) and while he was gone, I checked on the coals obsessively. 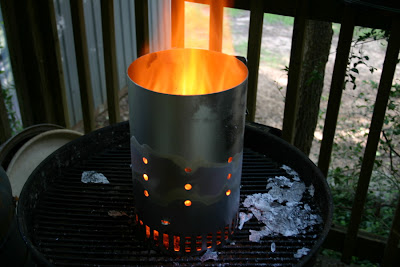 I also prepared the steaks by rubbing them with olive oil and then salt and pepper. 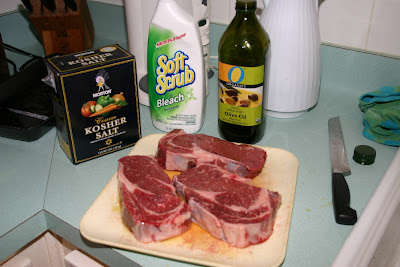 (I hate to admit that I didn't even notice it.)

Also while he was gone, I took many pictures of the making of our new favorite salad, Insalata Caprese

First, you cut the tomatoes up: 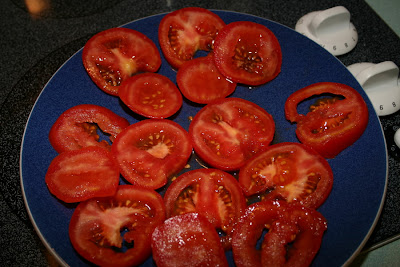 Then you skip lightly into your Tuscan garden and using your little clippers, you delicately snip sprigs of basil to sprinkle artfully over the tomatoes. (Except, if you live in Texas, then you go out on your porch and using your kitchen shears, you viciously denude a branch of the basil plant you are growing in a container... 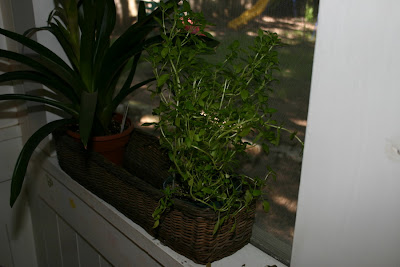 You sprinkle the basil over the tomatoes right about the time you notice that you forgot to put the mozzarella on the tomatoes FIRST.

So, you mutter an expletive and pour yourself a glass of wine. 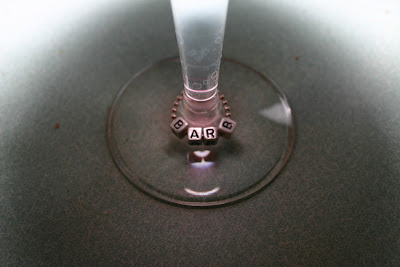 Then you poke the mozzarella under the basil, douse the dish in olive oil and balsamic vinegar and dust with pepper. 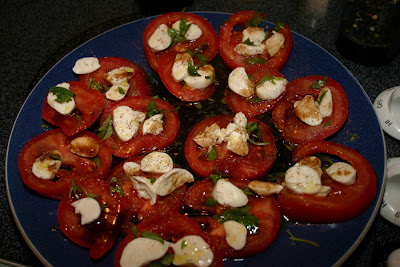 In the time you've been playing Cooking Show Host, your husband has finished cooking the steaks 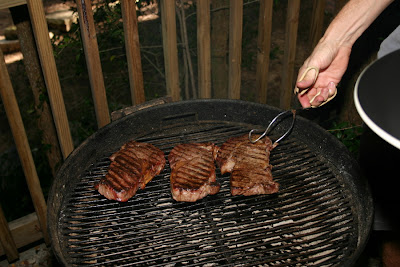 and so you have to sprint to get the rest of the dinner ready.

This includes the "salads" for the girls (careful to remember that one of them likes big pieces of red bell peeper and the other only likes them julienne. 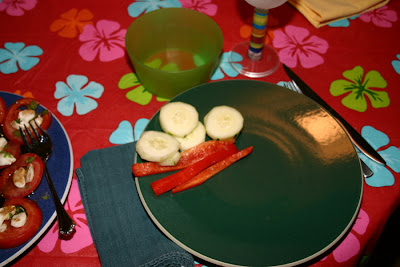 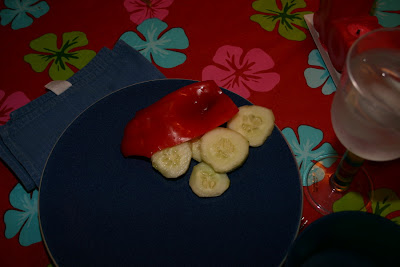 You pull the potatoes from the oven, dust all but one with cheese and taking care not to let cheese even TOUCH the one that must be plain, you set them on the table. 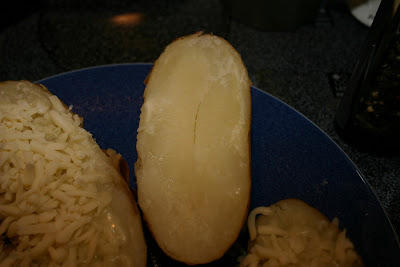 You light the LOVE candle that Jane accidentally stole from her Kindergarten teacher (it fell into the prize box right before Jane reached inside to pull a prize. She was so incredibly excited to bring it home--to add something to Steak Night --that her teacher didn't correct her. Isn't that nice? And Jane got off the bus shouting, "MOM! I GOT A CANDLE FOR STEAK NIGHT!!") and the family sits down to dinner. 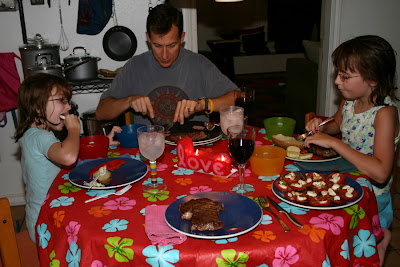 Right about then, you smell something burning and realize you've forgotten to take the bread out of the oven.

You think about giving away your camera.
Email Post
Labels: blogs Coop dinner humor writer kids My LIfe as a B Movie parenting summer The World According to Jane wine

My mom makes that tomato salad-y thing. We have it almost every night at dinner. I may have to ask her to skip lightly to the fridge (our own version of your window ledge/tuscan garden) from now on.
August 7, 2007 at 2:30 PM

Lynda said…
Barb, I think that you can do anything that you put your mind to. Want a cooking blog, go for it. Your humor will carry you and we will all be the better for it.
Also, thanks for turning me on to yet another wonderfully written, absolutely hilarious blog, Confessions of a Pioneer Woman. I started reading it last night after your mention of it and must have finished 2/3 of the archives and my husband even enjoyed the parts that I read to him. He does that with your blog too. I followed you to Mir's blog and now Ree's and am glad that you like to share the "good" ones.
August 7, 2007 at 2:57 PM

hokgardner said…
My darling husband B is an excellent cook, and he always forgets the bread in the over. Always.
August 7, 2007 at 2:58 PM

Damsel said…
The trigger for me to remember the bread is my behind touching the chair as we all sit down to eat.

Anonymous said…
I'm a decent cook, but you will *never* see photos on my blog of any cooking in progress. My kitchen, lovely as it is, will not stand the examination.
August 7, 2007 at 5:05 PM

Marion Gropen said…
I SO get the comment about being able to cross the kitchen without injury. Most of the time. Maybe.

It's a very good thing that my husband is a much better cook than I am. And therefore, that I am our house's queen of clean. Cooking? Over-rated. Getting 3 normal dishwasher-loads in all at once, so that they all get clean? Now THAT's a skill.

DK said…
I love that your version of cooking is so much like mine...the really key ingredient, is the swearing.