Love or Something Thursday 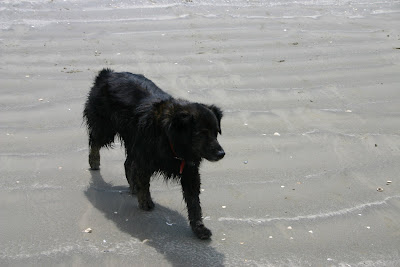 Last week, on a very cool and (surprise!) rainy day in Austin, I had the back door to our screened in porch open. I sat out there in the (surprise! no sunshine!) gloom, knitting and enjoying the moments of silence before the girls got up. At some point, my old dog Sydney came out and gave me That Look and I gave her a bowl of food and we sat out there in companionable silence until I noticed that she wasn't eating.

This is a dog who is VERY interested in food. VERY.

I got Sydney from one of those rescue places which found her after she'd been tied to a cart in a parking lot and abandoned. I've had her since 1994, and she was about a year old when I got her. In those 13 plus years, she's missed exactly, um, ZERO meals. Unless you count the few times I forgot to feed her. But she's pretty, um, communicative on the food issue so I'm thinking those weren't so many.

This summer, she's been fighting a staph infection. She's allergic to flea bites and since it's been so incredibly WET, we've had a big battle with fleas. (Have I mentioned the rainfall that we've had here in Austin? Have I mentioned that I can't even REMEMBER the last time we had rain in July before this year? I have? Because I can expound on this topic if you'd like. Sure? It's no trouble.) We've had the vet out several times. (Using a mobile vet is not near as expensive as you'd think and it's not near as expensive as the cost of psychiatric care for me after having to schlep four animals to the vet. Plus, it's less stressful by far on the pets themselves AND we have the greatest vet on the planet. I can't believe she does what she does since I'm sure we'd all load up our animals and travel to wherever she is if we had to.)

So, Syd has done a round of steroids and on the last trip out, Dr. Wyatt collected a urine sample (that was fun) and did a urinalysis. She called me and told me that the initial urinalysis showed that there were some issues and that Syd's renal activity wasn't normal. We were scheduled for a recheck when I discovered that Syd was once again covered with those staph infection sores. Dr. Wyatt came out again and we started Syd on more medicine, plus wiping her down with medicated wipes three times a day and bathing her with a medicated shampoo. We're ON IT. I know my old girl is in good hands.

You know, I'm pretty sappy. I've been walking around all summer, patting Syd on the head and doing that thing where I stare into her eyes and tell her I love her. Yes, I'm an overachiever, but even I think it's weird that I seem to be mourning in advance.

It's just that Syd has been with me a long time, you know? I had her before I met and dated and married my husband, much less had children and acquired Scout the Submissive Urinator. She was never my first "child"--she's always been my good friend, maybe because she was grown when I got her, I don't know. She has been the greatest dog.

I could sit here and go into all the funny things about her--like the way she chases the stream of water out of the hose and in following it, will do 360s in the air, or how she always came running and barking if one of the kids was crying (Alert! Alert! Clearly you people cannot be trusted not to make the baby cry!) or how she sneaks acorns into the house in her closed mouth. How she's afraid of storms and will find the nearest bed and snuggle down under the covers if it's thundering (and this is a dog who never sleeps in the bed because it's much too HOT.) How she refuses to come inside on the cool days in Fall. (I vaguely remember them.) Or the whole gender confusion thing... or the way her fur does this beautiful little stripe on her right front leg... or how she gets embarrassed when she gets her hair cut...how she runs so hard at the beach that she's SORE the next day...

Probably similar stories to the ones that anyone who has loved a pet for a long time can tell. It's just that I'm looking at her right now, with her beard that has grayed over the years and her eyes that have dimmed... and I'm realizing what a large place she has filled in my life --a place that is totally her own--as a first-rate dog and not as a second rate human.

We have cared for each other for a long time and I'm going to be here to help her ease over into the next world.

I'm just so not ready. I think my heart is breaking NOW, much less when she actually moves on. I guess that's how it's supposed to be.

I love you, Sydney. And when the time comes, I will let you go with grace. 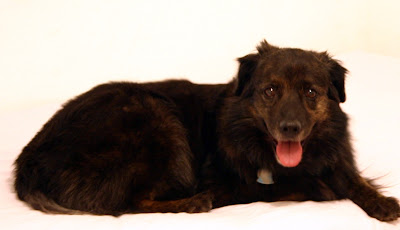 Anonymous said…
Barb, you're making me cry too. I've never met Sydney and I love her too.

Damsel said…
Oh, Barb... I'm so sorry you're having to go through this.

Anonymous said…
Yup, I'm with you. My still mostly healthy 22 year old cat has slowed waaaay down this year. But I love him dearly. I do know what you are going through.
August 3, 2007 at 12:24 AM

Anonymous said…
This post really hit home for me. Yesterday found me lying on the floor brushing and loving up on my gray-bearded, cloudy-eyed friend. Time passes so fast. Salsa's allergic to fleas too. Texas isn't the best place to be allergic to fleas, poor girls.

Anonymous said…
That photo of Sydney at the bottom just says it all, for me - you can see the love returned in her eyes, Barb. I'm cherishing each day I have with my 19 year old cat, as I've had her since she was 4 weeks old (too young to be taken away from mama cat, but I was too young and stupid to know that.)
August 3, 2007 at 12:04 PM