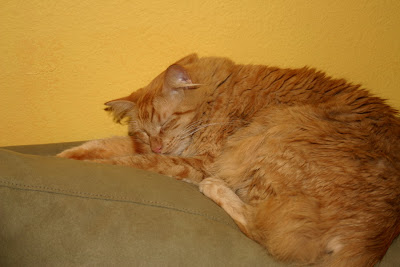 So, I have to write about our amazing vet now. I can't help it.

Did you ever read the book Travels with Charley, by John Steinbeck? It's one of my favorite books. In it, Steinbeck is traveling with his dog Charley, a standard poodle of advanced years who is experiencing some prostate trouble. The first time it happens, Steinbeck summons a vet who doesn't question and clearly doesn't care. The second time, he summons a young vet.

"Then the young vet's hands went down and moved over hips and distended abdomen --trained and knowing hands. Charley sighed a great sigh and his tail wagged slowly up from the floor and down again. Charley put himself in this man's care, completely confident. I've seen this kind of instant rapport before, and it is good to see."

I've wanted to use this passage for years to talk about a vet but I never met one who gave me this feeling before. Until now.

I first learned about Dr. Wyatt (She tells everyone to call her Kris but it seems oddly disrespectful in print, don't you think?) when she helped my good friends Ian and Kristine ease their geriatric cat into the next world. THAT'S a beautiful story but I can't write it because I only heard it once and you have to hear it in Kristine's Canadian accent and her amazing facility with language. It made ME cry and I didn't really even know their cat. Anyway, it was a great recommendation for Dr. Wyatt so I called her when our old dog Sydney started having all these problems. We've seen quite a lot of her over this summer.

When all this started with Edward last week, I had called Dr. Wyatt because he seemed so puny. (This was before I let him out without thinking and started the whole horrible Missing Cat Saga. I should be forgiving myself for that, oh... never.) So, over the next few days, she called several times just to see if we'd found him and not to mince words, but I was crying and incoherent in at least 2/3rds of those calls. Then Coop found Edward and I called Dr. Wyatt (crying) and she came down to our house at 8:00 on a Friday night and checked him out.

I wish I had video because she was so gentle and soothing to him. He was filthy and very, very sore --his whole back end looked like it was out of commission. She recommended that we take him to the emergency clinic--one we'd not used before but that is infinitely better than ours, according to my husband, who is now a veteran of taking Edward to the emergency room. She called the clinic in advance to make sure they were ready for us (and she casually said later that they would give us a discount for having had Edward seen by a vet before we brought him in.) She, herself loaded Edward into the carrier with her "trained and knowing hands." And then, after I tried to give her my van out of gratitude, and was walking her out to her car, she stopped with great deliberation, put all of her stuff down and gave me a genuine hug.

That hug meant the world to me. I don't think even my husband had given me a hug in comfort over Edward's disappearance. (I mean, it's not the first thing you think of doing to a quivering, tear-stained wreck of humanity. Plus, Coop's response was to GO OUT AND FIND THAT CAT --I am not complaining.) I'd been hugging the girls, because they (especially Jane) really were distraught over the thought of losing Edward. But I don't think anyone thought to comfort me until that moment.

And THEN, get this, she left my house, at 9:00 on a Friday night and instead of going straight home, she just swung by the clinic to check on Edward and to make sure he was in good hands.

I don't even know what to say about that. It just seems so far and above the call of duty.

I'm not telling you all what to do but if you live in Central Texas and you need a vet in whom you can trust your pets' care with complete confidence, I cannot recommend ANYONE more highly that Dr. Wyatt. She's Steinbeck worthy. (And I'm not affiliated with her in any way--I just love her. That's all.)

Rockstories, from the comments, wanted some sort of date/time stamp on the photos to prove that Eddy V REALLY was home and I wasn't just making it up. (Can you tell she's an attorney?) This presented some issues for me because, although I have a pretty sophisticated camera, it's a digital camera and the date and time stamp information is embedded in the picture itself. (And I have no idea how to turn the date/time stamp on so it appears in the photos. Which is probably a good thing since I once did this accidentally in my old camera and ended up a with a year's worth of date and time stamped photos --all stamped with the WRONG YEAR.) So, I took a picture of the print-out of the bill from the emergency clinic --but not the bill itself since I didn't want to give anyone a heart attack or anything. (My poor husband.) Anyway, it shows the date. 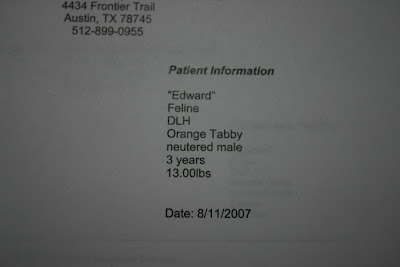 The clinic also gave us a copy of the x-ray showing the blockage in Edward's intestines. It's a funky file and I can't import it or you would have had MUCH more information than you were hoping for, again over breakfast.
Email Post
Labels: deep thoughts joy Maybe I Should Just Shut Up pets summer what makes a life

Like, what now, almost five years ago now I had to have my other dog (Wolf, who came before Maggie) put down. And the vet who did it was this woman I'd never met before, but she was so wonderful, and so gentle, and she knew exactly what to say to make it that much easier.

As life would have it, I've found myself in a number of situations since where I've reached back and used that experience in my own professional dealings. I sometimes would think about that, when I had to withdraw support on a patient or deliver a stillborn, and wonder what my patients would think if they knew I'd learned my bedside manner from a veternarian. Mostly I hoped they'd agree she was a remarkable practitioner. To the best of my knowledge, she did not thereafter go to Texas, but this lovely angel sounds like she's cut from the same cloth.

Anonymous said…
As someone owned by 5 cats (including two oranges, one of which is my tabby MaCallan or Mackie), I sympathized with you, cried with you, prayed for you and with you and just now got home from my weekend trip and rejoiced with you!

I am SO GLAD you have Edward back and that the angel vet validated your fear, mourning, "need to keep-it-together for the kids" while falling apart inside, and your joyful relief with mixed dread with that hug of hers.

Thanks for sharing everything - except the Xray and the bill total; I'd probably have a heart attack of my own (although it was REALLY quite thoughtful of Dr. Kris to call ahead and discount for "pre-check by a vet")- how many others would even THINK of doing that for you???

It's funny, but like everything else in that book, I often think about it when I run into medical professionals treating me or my kids. I actually sent this passage to my podiatrist and thanked him for being the right "vet" for me, but I'm sure he just thought it was a product of pain medication. In my experience, you can just tell, though, those doctors who have that certain "connection" with their patients. It's like having a sort of ESP or something. I am very, very, very convinced that you have it with your patients as well.

Give Maggie a treat for me and tell her that God listens to the prayers of the furry ones. Eddy V is home and seems to be doing pretty well.

Macy, thank you so much for following along and for noting that you were "owned BY" your cats. I feel a little silly over how attached I am to my dang pets but... well, another pet owner understands.

Tiffany said…
No, no, no...it's not that I didn't believe the cat was HOME...but well-being requires concrete confirmation. Kind of like when my mom got out of the hospital the other day, my daughter insisted that we go straight to her house...and five minutes later, she was out on the swingset. She just wanted to LOOK at her, back in her own environment, and get her own read before closing the crisis in her mind, I think.
August 12, 2007 at 7:41 PM

Barb Matijevich said…
Oh, so I should have posted a picture yesterday like the one today--of Edward asleep on the couch. Oh my gosh, he's there right now. I have to send you a picture.... hold on a second while I get my camera...
August 12, 2007 at 7:46 PM