I Tink, Therefore I AM

Okay, so that was a knitting pun. Tinking, in knitting, is when you unknit a single stitch down to the point where you made a mistake with it and then you take out a teeny, tiny crochet hook and knit it back up.(At least, that's MY understanding. If that's not what tinking is, please don't tell me.) I had to do this a bunch in finishing THESE: 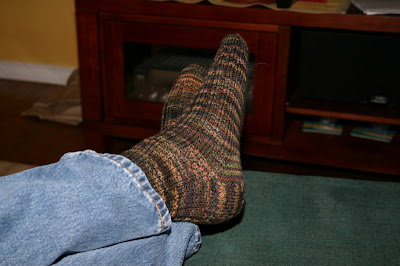 I am sorry about the picture. I tried very hard to get a BETTER picture but as soon as Coop stood up, the dogs, they came a'milling around. Coop was even good enough of a sport to try to stand in first position, because I asked him to, out of some sadistic urge that will no doubt be fodder for therapy at some point. I am worried that I decreased too quickly in the second sock and there's a weird ridge on it and also that the ankles are too baggy. He said he was never taking them off but, well, he might be more likely to FRAME them, considering what they cost. (So, sue me!)Anyway, look: 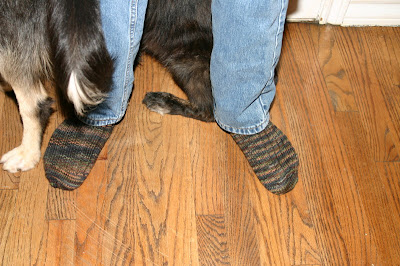 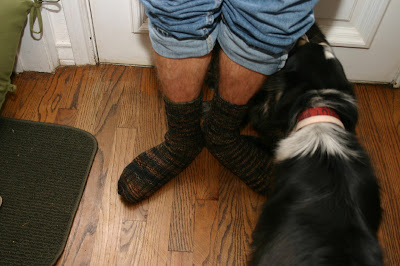 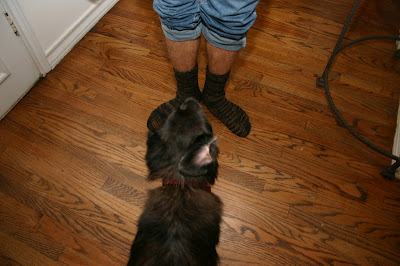 (That's Sydney, with her ear in what my husband calls "racing configuration.")

Oh, it was a big day for all of the Coopers. The girls had their church music camp recital. This musical was a bit out there for those of us trying to ease our husbands back into church who aren't quite so evangelicial, but it was very positive and the girls had a WONDERFUL time at this camp. I can't say enough about it. Ana, my shy nine-year-old, sang a SOLO! Look at this face! 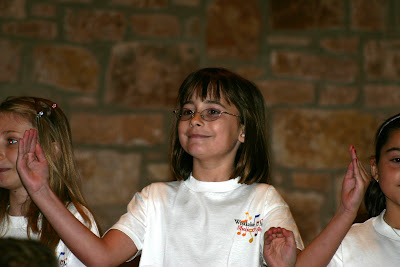 Unknown said…
The socks look excellent, the colour is right my street. What pattern, stitch did you use? Is that a rib all through?
August 4, 2007 at 1:53 AM

Annabanana said…
Awesome beautiful girl!!! Wow! I can so relate on the VBS thing, Mark leaned over and whispered in my ear when I dragged him into church for T's big performance "I can't believe all the brainwashing they do, with hand signs and everything!" - don't think he'll be joining us on Sundays for awhile, and honestly, even I thought of seeking out Hebrew camp or Sufi camp or something for balance! LOVE THE SOCKS, you ROCK on the knitting.