The thing about parenting is that much of it has to do with the management of bodily functions.

When kids are little, there is a lot of talking about spit-up and poop. (I noticed on my blog visitor statistics yesterday that someone found my blog by searching for blogs that have "poop" tags.)

(Come on over, honey! Might as well sit on down because you have got some READING to do!)

Then when one graduates to parenting a cow dog named Scout, there is a lot, I mean a LOT, of talk about urine.

Mostly, now that my kids are older, I feel need to talk a LOT about managing blood sugar levels these days.

Toward that end, I was going to attempt another cooking blog entry. 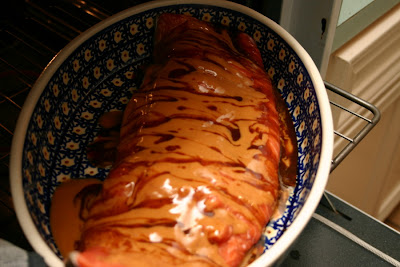 The sauce was made of my very secret, labor intensive recipe wherein one takes these two things 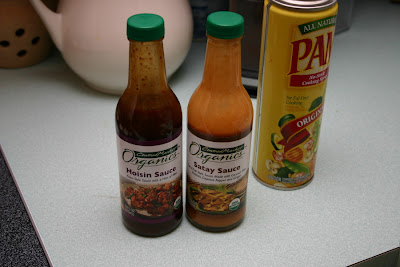 and drizzles them artfully over the top of a salmon fillet and bakes it on 350 for a time. (The Pam is in that picture because I used it to spray the dish before I put the salmon in it. This might be a good idea, unless you plan on using Soft Scrub on it later.)

Note that no child will actually eat this fish but it was a darn good way to keep my blood sugar levels steady while I was making their completely separate dinners.

Today, I think we have crossed the boundaries of what bodily functions I am willing to talk about in parenting my kids, though. (Stop reading right here if you get queasy easily.)

When my kids were little, I told them the stuff in their noses was called "germs." Because there really is no socially acceptable word for the stuff in our noses, you know what I mean? I don't want to hear a three-year-old talking about "snot." And I, myself refuse to use the word, "booger" because I hate it as much as that four-letter F-word for flatulence. (I know, I know, I am such a prude.)

Jane, having watched some Harry Potter, calls that stuff in our noses, "Bogeys" and that seems fairly innocuous. (Why is it that no matter what is said with an English accent, it sounds so much more civilized and couth? Here is a blogger doing a fake British accent while taking us on a tour of her house. Be warned, she uses some language that would get me an NC-17 rating or worse, but it's funny.))

On Tuesday when Ana was so upset about how messy my van is, she climbed into the back seat and then she shrieked, "Mom! SOMEONE WIPED A BOOGER ON THE SEAT!"

I was a little out of patience with Her Highness of the Princess and the Pea, so I told her that no one would do that (ick! gross!) and to just sit down, Missy!

Well, yesterday, I cleaned my car.

And it was definitely a booger. Someone had wiped a booger her GERMS on the seat.

Deborah Gelaude said…
We had a similar issue about what to call nose gunk with our 4 year old girls. We settled on 'webs' for better or worse...better, because it is a fairly innocuous word, and worse because no one else knows what they are talking about when they ask for a tissue to clear out their webs! This is increasingly an issue now they are in school.

I'm British and can't use bogey - I was always reprimanded for using it as a child, since it was as disliked by my parents as the word 'booger' is by me!

Anonymous said…
You know what's so funny. I probably say that 4-letter "f" word for flatulence about 10 times a day in my house (just me, alone) but I can barely stand to even read the word urine.

Lynn said…
I am *so* with you on the b**g*r issue. Gag when I see little kids with "nasal issues", even if they're my own, gag if they say the word b**g*r. My kids are old enough to be semi-respectful about it even though they think it's hilarious. One of them says "nose soldiers" just to make me laugh.

Changing the subject entirely, that salmon looks wonderful, and I haven't been to Central Market in months. Will that make me hoisin by my own petard?
August 31, 2007 at 7:33 PM

Annabanana said…
I decided that my previous comment was just not what I'd like to write, so I trash canned it. Sorry sweetie, one thing it said was that Baker is coming home and how much I appreciate all the love you have sent him, and that part I'll say again - thank you!
August 31, 2007 at 8:37 PM

Suburban Correspondent said…
Barb, the stories I could tell you about boogers left in inappropriate places would make your hair curl. They are the sort of stories where, if you are telling them to a girlfriend while you are out for a drink, you'd be trying not to laugh and because you are trying not to laugh, you would be snorting your drink, which of course would only make you laugh harder. All I can say is that I never dreamed that as a parent, I would sit 3 of my children down to say to them (in a very serious tone), "We are going to Grandma and Grandpa's house. They are very old and frail. You may not rub your boogers on their switchplates and doorknobs, because you could make them very sick."

Talk about suddenly realizing what sort of person you've become.

And people end up on my blog who have googled words such as "vomit" and "stomach flu." Imagine, these poor people are probably looking for some serious help, and they end up reading my blog. They must hate me. Or hate Google, anyway.
September 1, 2007 at 5:14 PM