I apologize in advance for this blog entry. I haven't even written it yet and I can tell it's going to be totally sappy. Because I've been thinking all these sappy things and I'm about to write them all down. So, if you're not in the mood for the maudlin musings of a mooning mom (Am I GOOD at this alliteration thing or what?) just pass right over this one.
I wrote that our neighbors lost their seventeen-year-old son in a car accident this past week. I can't write much more about that because, although I feel this profound sense of loss and horror at the idea of losing a child, I don't think we can really understand what it means to those parents. Sympathy can only go so far, even when coupled with good imagination and your own sense of grief.
But I'm so worried about my neighbors. They are such good and loving and kind people --just the best kind of parents. In this past week, they've aged about 100 years. She, who is this beautiful woman with an almost palpable serenity about her, seems to just be permeated with sadness. She radiates it. I wouldn't expect anything different, but I am still very worried about her. Last night, she and her husband came out and mowed their lawn and I kept wanting to go over and take the lawn mower away from them and do it all myself. Luckily, I had a friend over who has a degrees in counseling and psychology. ( I didn't even know this about my friend --it just came out last night in conversation. Do you think I should be worried that so many of my friends are mental health professionals? Do you think maybe they are DRAWN to me for some reason?) My friend said that I should just leave them to do their lawn. "It something to do without thinking," she said. "Maybe it's a little bit of normalcy for them."
But I couldn't help myself. I just hovered at the window, wringing my hands. I guess I should have been knitting. I've been thinking a lot as I've been knitting my "Thimble of Water to the Chicago Fire" Socks for the boy's mother. Thinking about her loss; the permanence of it. What I would do differently if I knew I only had seventeen years with my child.
Not to be all ME ME ME or anything, but I think it's had a dramatic effect on my mothering because, Dude, life can be so freaking fleeting and I really don't know what I would do if the last thing I said to my child was, "And listen, Missy, when you get home, we're going to have a serious talk about how those Polly Pockets managed to "fall" into the toilet and cause some sort of stoppage that made it overflow. There will be a Loss of Privileges. You can count on it." Now I try to make sure the last thing I say to my kids is, "I love you so much." and then I give them a good hug (whether they like it or not, dammit.)
The thing about parenting is that emotionally, it's kind of schizophrenic. Mostly, I feel like I am a good mother. My kids know that I love them more than life itself and I think we have done a good job so far in attending to their emotional needs, etc. I haven't poisoned anyone. Both girls are potty-trained, can dress themselves, can almost get all of the soap out of their hair during baths.
But I also think that I constantly have some kind of guilty conscience going. I feel guilty for being so crabby when they are being, um, children. And for not enjoying them more in these last few moments when they still like me, if you know what I mean. I'm crazy about them but when the bickering and whining starts up, I'm not patient. I'm not kind. I'm not creative about distracting them or coming up with fun things to do instead of torturing each other.
And here it is, the weekend before school starts and I'm out of time to show them how fun it can be hanging out with mom. I THINK they had fun this summer --we did a lot of fun things -- but I also feel like I spent a large amount of our time together saying, "No."

"Turn off the television."

"I'm sorry, were you under the impression that I am MADE of money?"

It's just hard. Ana went to spend the night with a friend last night. She's nine but she's only made it through one entire night away before last night. I woke up every two hours because I was so anxious. But she was fine. She's growing up and she's more self-reliant and she's also copped to the idea that if she sleeps over at someone else's house, she gets to stay up late and then return home an uncooperative zombie. Sleep over AND torture everyone around you--win-win.

I don't know. I'm filled with a sense of loss --and it's not just about my neighbors and their son. It's about the lost days of summer when I wished my children would leave me alone. Because now, they'll be in school and I'll BE alone and after a few months, that's going to get old, don't you think? No, I'm kidding --they'll be in school and I can already tell that I'm going to miss them.

My heart breaks. I really need to finish these socks. 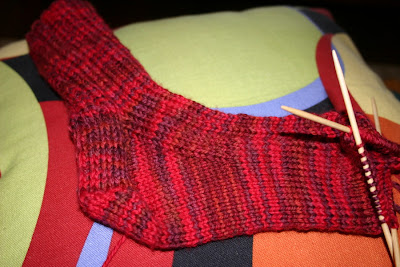 Anonymous said…
this is so strange...today is the first time I've read your blog and...about 12 years ago one of our neighbors lost their 17 year old son. It was such a horrible thing... and I know you know what I mean when I say horrible doesn't even begin to describe it. Their pain!!!! it was all consuming...they did everything with their children... I know it's terrible to say, but of all the families that this could have happened to it shouldn't have been them. This week has been very painful for my family. Almost two years ago we lost everything during the Katrina hurricane, but to read this post and feel your neighbor's pain and remembering my neighbors pain has put our problems in serious perspective. Thank you for sharing this with us. And I think making her a pair of socks will help her know that she is not alone. Everything is eaier to go through with the love of others.
August 25, 2007 at 10:01 PM

I feel so self-absorbed when you write. But I will tell you that I took some toilet paper over to my neighbors and I told them that it symbolized my willingness to do the lowest thing they could think of if they needed me... It's just so freaking hard.

Blessings on you, and THANK YOU for sharing your story. Seriously, it has made a difference in my life.

Suna Kendall said…
Barb, as you know, this has affected me a lot, and I am even less connected with your neighbors. My son just casually mentioned to me in the car that his "girlfriend" (friend who is a girl mostly) dated Jack last year, having met him in debate. My son's been comforting her, too, as she deals with the loss of a friend. I guess the whole debate community has been affected--from up here near Round Rock down to Buda, where the girl lives.

Both my sons will be in high school this year, and while they annoy me sometimes, I also feel so lucky to have these unique young people in my life. They teach me so much. I can't imagine life without them. Something like this can't help but affect your parenting, and in a good way.

Anonymous said…
You know I think there must be a secret kind of drug that they give to the mothers of children who have died. Some sort of secret pill that allows those moms (and dads, of course) to function. To somehow get through a funeral and a burial and the next day and the next day. I've told my husband that if anything were to ever happen to our daughter, I would not be able to stop myself from going with her. I think I would immediately die so that my spirit could still be with her and hold her hand to wherever the next place is.

Bullwinkle said…
Almost a year ago, my (then) 20 y.o. nephew was in a car accident. He and a friend (the driver) were struck by a drunk driver. The two teens in the other car, and my nephew's friend, all died. There is some part of me that thinks "we aren't supposed to get over it" but we are supposed to figure out how to go on and to love the ones we're with. (And somehow protect the young ones and rig their cars to never go faster than, oh 20 mph?)